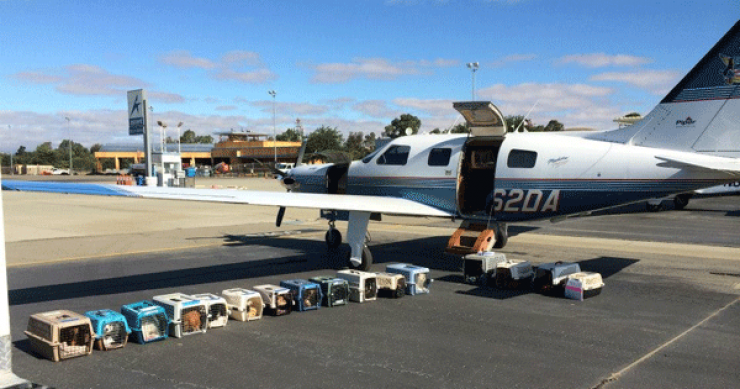 Two California-based men are bringing pioneering solutions to a sinister global problem. One is a documentary filmmaker, the other a commercial real estate developer and amateur pilot; both are animal lovers fed up with seeing animals euthanized for lack of shelter space. Wings of Rescue flies dogs and cats to forever homes and quick adoptions shelters in other states; ShelterMe.com is a self-described “social network to help shelter animals get adopted.” And sometimes they work together.

Steven Latham is the co-founder of ShelterMe.com, a kind of proactive, self-contained Facebook space for shelter animals in the greater Los Angeles area.  The idea is simple: people visit animals at their local shelter, then go to ShelterMe.com where they create “beautiful profiles of shelter pets by uploading photos, video and detailed descriptions of each animal,” according to its site.

Links to the site can be shared (“Oh Susie, you’d love this pooch I met yesterday at Shelter X!”) while would-be adopters can peruse pet profiles to get a sharper sense of an animal’s character and suitability with a given family.

The idea grew out of a series of films Latham created for PBS starting in 2012 with ShelterMe.com co-founder Ady Gil which celebrated shelter pets through positive and uplifting stories. The web site followed in 2013; the ShelterMe.com concept, meanwhile, is now ripe for export around the world.

“I feel such a responsibility to these animals. There are so many great stories to tell and these animals deserve better,” Latham tells Samaritanmag from L.A., adding that he is also involved in other programs such as trap-neuter-release (TNR) aimed at addressing pet homelessness from all sides. 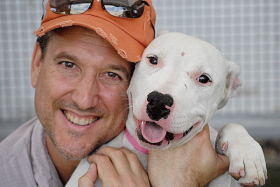 Latham continues: “People need to develop relationships with their local shelters. This has to be community-based. People don’t realize they can still help even if they are not able to adopt for whatever reason. Donate towels and blankets. Create a profile of an animal on ShelterMe.com. Even if you don’t create a profile, share the links with people in your network.

“If these animals are just sitting in their kennels without anyone knowing about them, they are going to have bad outcomes. You start sharing links and suddenly it’s like, ‘Wow I bet my neighbour or co-worker would love this dog or cat.’ That’s where the magic happens — when people start really advocating for these pets. We have to do something.”

Pilots organized by Wings of Rescue volunteer their time and their planes to fly the cats and dogs — some 10,000 to date since the organization’s 2010 launch — with costs funded solely by donation. Netanel, an amateur pilot with his own plane who had done charity work previously, confirms to Samaritanmag that “This is an ultimate game of who needs what and when.

“By fostering relationships with various shelters and humane societies in various regions, we created this almost constant airlift of dogs finding new lives. It’s time-consuming and complicated to coordinate this — especially with a staff of zero but many dedicated volunteers — but the dogs aren’t flying aimlessly in the sky. When we land, there are organizations taking them off the plane immediately and those dogs are being adopted within a matter of days.”

Both Latham and Netanel emphasize the need for positivity when approaching the topic of shelter animals, especially since so many stories are heartbreaking and a crushing sense of hopelessness can easily prevail.

“The premise of Shelter Me — the TV series and the ShelterMe.com website — is that change comes from inspiration, not desperation,” Latham says, confirming that since the site’s inception, “we’ve had over 10,000 profiles created with an adoption rate of over 85 percent.

“A lot of times, what you’ll see — especially with people posting on Facebook — is an emphasis on the negative. Like, ‘You have to adopt this animal because it’s going to be euthanized.’ Our approach encourages adopting a pet because it’s going to become an amazing member of your family. We want to get away from this sky-is-falling mentality.”

Not surprisingly, the ShelterMe.com concept has taken flight in multiple ways. “We’ve partnered with students that have community service requirements and a number of them went on to become volunteers with the shelters. Companies have offered incentives for employees who create profiles for the animals.

“That’s the kind of ripple effect I’m talking about. Shelters for the most part are these out-of-sight, out-of-mind places. But they are part of a community and they aren’t going anywhere. So the best thing we can do is to get people to go there.”

ShelterMe.com has also partnered with Wings of Rescue. While researching a story for an upcoming episode of Shelter Me, Latham hit on the topic of transport and moving shelter pets from one part of the country where it was overcrowded to another where there was space.

“So I filmed Wings of Rescue doing this transport last March in conjunction with Bark Avenue Foundation,” which offers spay/neuter services in underserved communities.

The resulting Fly Me Home program, which united the efforts of the three group, has so far executed “about seven or eight transports,” Latham reckons, relocating as few as 15 or 20 animals at a time to as many as 145.

“Just [recently], we worked with about seven shelters in Los Angeles county and flew 145 shelter pets from the Long Beach airport to four shelters in Oregon and Washington,” Latham says, noting that Wings of Rescue continues doing other independent airlifts for needy animals.

“Currently we have 28 pilots,” Wings of Rescue co-founder Netanel says. “And we are always looking for more. Sometimes we have to go outside our pilot roster, so we may charter cargo planes that would be suitable for the rescue missions. That’s how we augment our airlift capacity. But it’s expensive.

“Ideally, somebody would offer us enough money to actually acquire one of the planes we charter. That would make it possible for us to save maybe an additional 10,000 animals a year on top of the roughly 4,000 a year we do right now.

“Everybody recognizes there is a big problem with homeless animals,” Netanel continues, “but most people just accept it and move onto the next thing. Pilots are in a unique position to do something about it. We can take an animal from the brink of euthanasia to meet their new families, sometimes within hours of landing.