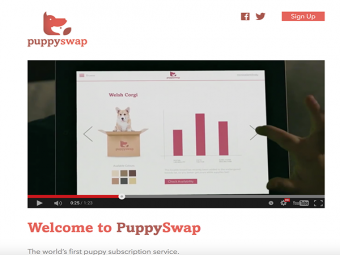 Had enough of your dog? Why not trade the old guy or girl in for a puppy? When that one grows up, simply trade it for another puppy. Have you seen the horrifying television and online ad for PuppySwap (view it below), the world’s first puppy subscription service? There is even an actual web site, but rest assured it’s a hoax.

The campaign, which has been running all year on various TV channels, most recently CHCH Hamilton, is by ad agency Grip Limited for the Toronto Humane Society and has more than 360,000 views on YouTube.

“The impact has been incredible. It has raised awareness and brought attention to a crucial issue that a lot of people are unaware of; pet ownership is a lifelong commitment.”

It begins by showing children and adults playing with cute puppies, then gets strange and appalling:

“Imagine, being able to enjoy all the friendship, devotion and unconditional love of a puppy with no long-term commitments,” says the female voiceover, as peppy acoustic guitar music plays in the background.  “Welcome to Puppy Swap, the world’ first puppy subscription service.”

The ad is so upbeat it even includes a little bark and some tuneful whistling.

“Here’s how it works,” the voiceover explains.  “Sign up on the PuppySwap website to instantly access our large selection of in-demand breeds. Pick your puppy based on user ratings, adorability or what’s currently trending and before you know it your new best friend will arrive at your doorstep. It’s the beginning of an exciting journey you’ll never want to end…and now it never has to.

“Because the moment your puppy grows up, becomes a bother or gets less likeable, simply log back into your account and swap out your old best friend for a brand new one.

“Starting at a low montly rate with no long-term commitments,” near the very end of the 1 minute and 23 second ad.

Then the PuppySwap logo and URL appear on the screen. And suddenly these words: “PuppySwap isn’t real. Unfortunately, pet abandonment is. Over 180,000 animals enter Canadian shelters each year. 40% will never leave. Pet ownership is for life.” And then the perpetrators of this clever hoax: The Toronto Human Society’s logo and URL.

If you do go through the motion of clicking the “sign up” button or wait on the site too long, a visual comes up with the aforementioned stats and the line “Help us spread the word — pet ownership is for life” and “more info” tab.

That leads to a FAQ page that says:

“Pet abandonment is a real problem.

Over 180,000 animals are surrendered to Canadian shelters each year, many by owners who were unprepared to care for a pet.

186 Humane Societies and SPCAs in Canada.

74% of dogs are not reclaimed by their owner.

95% of cats are not reclaimed by their owner.

Thankfully the Toronto Humane Society is one of the exceptions — more than 90% of the animals surrendered into our care go on to be adopted. This is unfortunately not the case in all shelters across Canada.”

Two comments Buckingham said the Toronto Humane Society received just recently are the succinct: "BRAVO to the brilliant mind that conceived that idea!!!!!” and the wordier "“I just saw your commercial for the first time regarding puppy swap.  At first I was horrified as I watched.  I couldn't believe a company promoted this type of ownership behavior and my blood started to boil and I was ready to raise the roof and start a petition and all the rest.  I was so relieved when it switched and said puppy swap was not real and that pet ownership was for life.  My blood pressure returned to normal thank god!  Thank you THS for this type of consumer information regarding pet ownership.  I must be honest the usual horror and depressing commercial of abused pets and sadness makes me immediately click and change a channel.  This type made me want to donate again which I will immediately.”