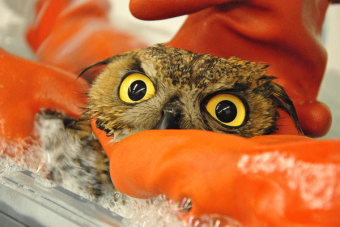 Corporations and conservationists typically occupy vastly different worlds. Occasionally however, the two find common ground and work together. And the environment wins. Such is the case with Dawn Saves Wildlife, a campaign executed by American multinational consumer goods company P&G in partnership with California’s International Bird Rescue (IBR) and the Marine Mammal Center.

Both organizations rescue, rehabilitate and release wildlife that has been injured during oil spills and other man-made and natural disasters, as well as responding to more run-of-the-mill (but no less heart-rending) situations such as birds becoming entangled in discarded fishing wire or marine mammals being orphaned.

An important discovery was made in the early 1970s by Alice Berkner, founder (now retired) of International Bird Rescue and a pioneer in the cleaning of oil-slicked birds: everyday dishwashing soap gently but effectively removes oil from affected feathers and skin. Yup, household dish soap cleans birds best.

“Alice had been trying all sorts of different things to clean birds,” Jay Holcomb, long-time executive director International Bird Rescue, tells Samaritanmag from his California office. “She got talking to someone at Chevron who gave her the idea of using detergent, which they were using to clean tanks.

“Alice got a grant and tested the top 10 products on the market — this would have been around 1978 — and discovered that Dawn worked best out of all of them. That’s when we started using Dawn detergent.”

Dawn — manufactured by P&G and brought to market in 1973 — finally and formally leveraged that fact in 1988 when it entered into a partnership with IBR. The partnership with the Marine Mammal Center followed in 2006.

Under the partnerships, Dawn provides free soap. Its enormous marketing muscle elevates the profile of both organizations through a website and series of ads. In 2013, P&G — under the aegis of the Dawn Saves Wildlife campaign —  made a $1 million donation to IBR and the Marine Mammal Center. 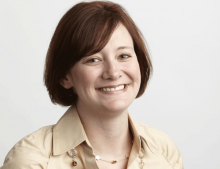 What’s more, according to Dawn’s communications manager Tricia Higgins, the Dawn Saves Wildlife campaign allows consumers to feel engaged by making a conscious choice even though, at the moment, proceeds from sales aren’t directed towards IBR or the Marine Mammal Center.

“We have absolutely heard from consumers that they make a point of buying this product to help animals because they love animals,” Higgins tells Samaritanmag from her Cincinnati office.

“This is a long-standing commitment with our partners and we will continue to help fund their work although the exact dollar amount is still to be determined. This partnership is so important to us and it’s very much in line with our corporate strategy of ‘Touching lives and improving life.’ And it makes us feel good.”

P&G could not have picked two better organizations to uphold its mandate.  The Marine Mammal Center pledges to “expand knowledge about marine mammals — their health and that of their ocean environment — and to inspire their global conservation,” according to its website.

“Our core work is the rescue and rehabilitation of sick and injured marine mammals, supported by state-of-the-art animal care and research facilities, a corps of dedicated volunteers, and an engaged community,” work they have done tirelessly since 1975.

International Bird Rescue has been on-scene at oil spills across the decades and around globe, from the Exxon Valdez oil spill in Prince William Sound, Alaska in 1989 — “the first major spill where field stabilization and transport were utilized extensively in oiled wildlife care,” according to IBR’s website — to the Treasure oil spill in South Africa in 2000.

IBR was also at the Deepwater Horizon oil spill in 2010, the largest accidental marine oil spill in petroleum industry history which claimed 11 human lives and emptied 4.9 million barrels of crude oil into the Gulf of Mexico before the wellhead was capped.

The Treasure spill offers some perspective on the logistical scope of IBR’s work. According to its website, during the 12-week rehabilitation process, more than 130 International Team members supervised over 45,000 different volunteers who cared for some 21,000 affected penguins, 19,000 of which were rehabilitated and released back into the wild.

Workers fed some 400 tons of fish (some days as much as 10 tons) to the birds while coordinating 7,000 tons of beach sand that was brought in for their pens. Approximately 302 25-liter jugs of detergent were used to clean the birds.

Ask Holcomb — IBR’s director since 1988 and himself a pioneer of wildlife rehabilitation — how many birds he reckons he’s handled in the course of his career, and he’s taken aback. “I wouldn’t even know how to count,” he laughs. “South Africa alone was 21,000. And I’ve been with IBR since 1985. Maybe hundreds of thousands?”

“In the U.S., the Oil Pollution Act of 1990 outlines how companies that discharge petroleum have to act. Those companies may just call us directly. We have contracts with others. But anyone can call and hire us and we go to work. Internationally, it varies.

“If companies don’t have to hire someone to help them clean up a spill, quite often they won’t,” Holcomb says. “They will just let the animals die. Many Europeans countries have the resources to do cleanup themselves and we might come in as support.”

Canada, too. According to IBR’s website, the organization assisted on the ground during the bitumen release in the Alberta Tar Sands in the summer of 2013. 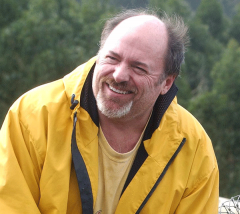 Holcomb continues: “A big part of our work — in addition to oil response and preparedness and aquatic bird rehabilitation — is research and education and we share that with others so they can strategize their own preparedness plans for the future.”

Asked how seatmates on airplanes react when he tells them what he does for a living, the peripatetic Holcomb laughs. “Honestly, people are always surprised to learn that Dawn dishwashing soap in used to clean birds. But I often hear from people that they are very glad we are doing what we’re doing. So I hear gratitude.

“The work is gratifying. But there are days that just suck – I don’t know any other way to say it. There was one time back in the 80s when we had to euthanize 500 birds. I remember being so upset, saying, ‘I wasn’t hired for this; it’s ridiculous!’ But there was a massive oil spill, no one was prepared for it and we knew we could save some of the birds but not all. So we sucked it up and did it.

“I worked at the Exxon Valdez spill. I wish I could wipe those memories from my mind. We had animals in pain screaming all over the beaches. Then the media attacked us because we were hired by Exxon to take care of the animals, which was actually one of the best things they ever did. Those days are in there with the wonderful days full of achievements.”