Cupcakes Are Good For Animals: SPCAs & Humane Societies Explain How 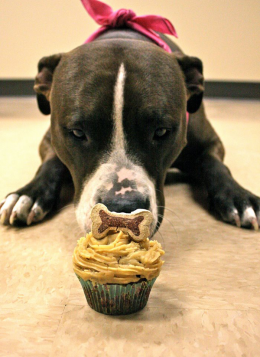 Some in the animal rescue world have declared Feb. 23 National Cupcake Day. What is the tie-in, except leave out some cupcakes and dogs and cats will surely get their nose into them?  Well it turns out the sugary snacks can help animals.

Farrah Rooney, Manager, National Cupcake Day for SPCAs & Humane Societies, asks participants to hold their own Cupcake Day any day in January or February. The campaign encourages animal lovers to register on the National Cupcake Day website and create an online “bakery.” There they can promote the event, upload photos, and collect donations from friends, family and co-workers. Then it’s time to bake, with all funds going to the SPCA or Humane Society of your choice.

National Cupcake Day was created in 2008 by Australia’s Royal Society for the Prevention of Cruelty to Animals (RSPCA). There it is known simply as Cupcake Day. Already a success in Australia, New Zealand and the U.K., the Canadian version, which is spearheaded by the British Columbia and Ontario branches of the SPCA, launched in 2013. Its 2,000-plus participants raised more than $450,000 last year for SPCAs and Humane Societies across the country.

Rooney recently spoke with Samaritanmag to discuss the origins of National Cupcake Day, where your money goes, and why cupcakes.

Talk about the history of the event. It originated in Australia, yes?

“The BC SPCA and the RSPCA in Australia created a really fantastic exchange relationship where they looked at both their societies and realized they had a lot in common in regard to size and what they’re trying to do. So they decided to pool in various areas their resources and really learn from each other; they did it in IP (intellectual property) and cruelty officers and also in developing campaigns and fundraising.

“So [the RSPCA] had this – and still do – this very successful campaign called National Cupcake Day; they call it Cupcake Day down there. And they basically gifted it to us, very generously. Then there was another little mini-conference animal welfare charities had in Vancouver. It was then that the Ontario SPCA agreed to spearhead this National Cupcake Day campaign, and we also agreed at that point to invite other SPCAs and Humane Societies across Canada to participate.”

How are you primarily getting the word out?

“We have a multi-spearheaded marketing strategy; multi-level. So we do everything we can. Because we’re a charity, we don’t have the hugest budget in the world, but we are very lucky to work with partners that support us and give us free coverage.

“E-blasts are a big one. So we e-blast out to our supporter lists. We do everything. We have PR support in certain markets. So we have [Food Network chef] Anna Olson supporting us. So Anna is going to be going on various shows in Toronto which will go out nationally; I think we’re going to be on [Toronto daytime talk show] Cityline. And then we have Kristina Matisic from The Shopping Bags on the Oprah Channel. She’s supporting us also in BC. So she’s getting lots of great press for us out there; going on shows, getting on magazines.

“We have bloggers involved. One fun thing we’re doing is having a big Twitter party. We’re actually having two: one February 3 at 8 p.m. EST and one at 8 p.m. PST. And we’re getting the word out through our sponsors, and we’re giving out prizes. And in movie theatre lobbies, we have videos there. And we have Facebook campaigns, social media. You name it, we’re trying it.” 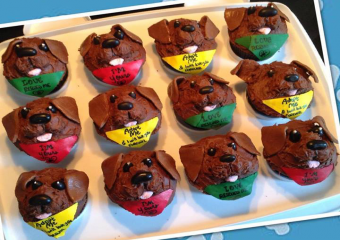 How surprised are you by how well the event has caught on with the public?

“I come from the BC SPCA which is an amazing organisation in British Columbia and has lots of support. And so I know there is a lot of passion and support for animals that people have across Canada, and we’re very grateful for that support.

“We’re not terribly surprised; we’re really, really happy. I think we saw how great the campaign worked in Australia, and we saw a lot of affinity between Australia and Canada.

“And cupcakes are just so much fun. It’s a great fun way for people to get involved and demonstrate their love for animals and cupcakes to co-workers, friends and family. It’s such a good-feeling campaign. It makes people feel great to get involved, to bake cupcakes and offer up cupcakes. It does so much for our SPCAs and Human Societies across Canada that really need the support.

“We’re absolutely thrilled, but we were hopeful this campaign would do well in Canada, and we anticipate it has lots of room to grow.”

I guess National Green Salad Day would not have gone over so well.

“Right? People need a treat every once in a while.”

Is there anything unique about the Canadian version compared to how the event is run in other countries?

“Although it is organized by the Ontario SPCA and BC SPCA, we have some 53 charities working together under one campaign, and that really is unprecedented. Charities don’t typically come together to work on one campaign — there are lots of logistic hurdles to jump through to do that – but everyone’s really committed and dedicated to making it work.

Over $450,000 was raised last year. How were those monies distributed?

“When a person decides to participate in National Cupcake Day, they’re going to go onto our website. And the first thing they’re going to do is be asked to select their region, and then they’ll choose from our participating societies who to support.

Do you have a specific financial goal this year? 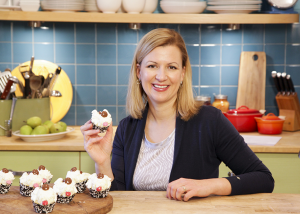 The branding for National Cupcake Day is arguably more inviting to women than men. Would you say that is the case?

How many participants are registered so far this year?

“As of [January 26]: 1088. Cupcake and animal lovers across Canada are getting super-excited for the event.”

Describe how far some of the contestants went in terms of raising money and outdoing themselves? How serious do people get about their cupcakes?

“Our top team last year —  Linda Mah, Biig Financial Company and Brian Jessel BMW of Vancouver BC — raised $25,800 for the BC SPCA. They reach out to all their corporate partners and the press to throw such an amazing event.

“Our supporters also demonstrate so much passion and love for animals. Our top individual fundraiser last year, Andrea Kelter of Antigonish, NS, who raised $5,530 for the Nova Scotia SPCA, shared with us her amazing stories of her rescue dogs, who she nursed back to health out of terrible circumstances. Not only does she demonstrate an inspiring level of dedication to her dogs but a wonderful commitment to helping other animals in similar circumstances.

“We also have pictures and stories of supporters who have baked hundreds of cupcakes to raise funds. We have a story of two teachers who agreed to get cakes in the face if their students raised $1,000 for National Cupcake Day, and they did.

“Last year we also had a supporter make a little photographic story about how her cupcakes were going to reflect the story of how she came to adopt her two dogs.”

And what are your own National Cupcake Day plans? Do you have a secret recipe?

“It’s one of the best days of the year for me. I spend National Cupcake Day on Facebook and Twitter, sharing everyone’s wonderful Cupcake Day party pictures and successes with the rest of Canada. I am so honoured and overwhelmed by the generosity of animal lovers across Canada. I love my job.

“I am definitely going be trying out our Cupcake Crusader Anna Olson’s Lemon Coconut cupcakes.  You can get the recipes and download a recipe card [on the baking tips & tricks page]. Anna’s even created a step-by-step video to walk me through it.”