Pie Drive In Honour of Grandmother Sells Out In An Hour 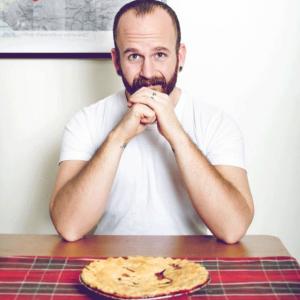 Zack Ginies’ second Pie Drive benefitting homeless youth at Covenant House sold out in just over an hour. The Toronto man will bake 80 pies in one week, Dec. 1 to 7, using his late grandmother Kay Andrews’ blueberry, apple and raspberry pie recipes. While orders may be closed, his site is also accepting donations.

“The first year for The Pie Drive was an amazing year,” Ginies tells Samaritanmag. “The whole idea was conceived, organized and executed in less than three weeks  — it was crazy. We managed to get the website designed, built and ready for orders in about four days.”

He says as the baking week approached, he started feeling “terribly nervous,” questioning whether he would be able to pull off the whirlwind commitment.

“I started thinking about all the things that could go wrong. Would I have enough ingredients? What happens if the power goes out? Well, as luck would have it, the power did go out and, I think, I still have bags of sugar kicking around from last year.

“The actual baking was surprisingly simple; it was the volume and the man-hours that I don't think I was prepared for.  I was literally prepping, baking and cleaning for 16 hours each day.”

Ginies wasn’t a newbie pie-maker. He works as an interactive developer but has been baking pies as a hobby for the past few years. When his grandmother died last year due to complications from hip surgery, at age 91, he decided to do something in her honour.

“My grandmother lived in the country. She frequently made trips to local berry farms to fill her berry baskets and subsequently, our little tummies,” he writes on his web site, explaining his motivation behind the Pie Drive. “Visits to nanny in my youth were always delicious ones.

“My sister and cousins were always treated to fresh baked apple, raspberry and blueberry pies. Her pies were legendary and her memory lives on through the flakey crusts that always brought us together.”

After raising the $1200 for Covenant House, Ginies was invited down to the Toronto facility which provides a range of services to at-risk and homeless youth who are dealing with everything from abuse and addictions to mental illness, prostitution and gangs.

“Covenant House was so grateful for the money we raised,” says Ginies. “They brought me over for a tour of their facilities — which are incredible — where I met a lot of their volunteers and staff as well as some of the youth. It was truly an amazing experience.”