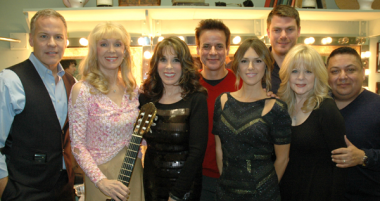 Young and the Restless star Kate Linder, who plays Esther Valentine on the top-rated soap opera known as Y&R, returns to Toronto Dec. 8 for the second annual High Tea to raise money for the March of Dimes. She will be joined by Jess Walton (Jill Abbott), Christian Le Blanc (Michael Baldwin) and Marco Dapper (Carmine Basco).

Billed as “OpportuniTeas with Kate Linder & Friends,” the charity event — which last year sold out and raised $50,000 — is the afternoon of Dec. 8 at the Fairmont Royal York and includes a Q&A session, autograph and photo opportunity, silent and live auctions, raffle and gift bags. Tickets range from $100 (general admission) and $125 (preferred seating) to $250 (VIP).

Presented by Global TV, the station's Leslie Roberts, anchor of The News Hour and co-host of The Morning Show, will emcee the event.  Y&R make-up artist Patti Denney and hair stylist George Guzman will auction off an on-the-spot makeover.  Another auction item is a Y&R studio tour in Hollywood, conducted by Linder, including airfare and hotel for two.

Linder became the national spokesperson for March of Dimes Canada's Conductive Education (CE) program in 2012, “when she saw firsthand the significant, life-changing impacts CE has, not only on the participants, but their families as well,” it says on the web site.