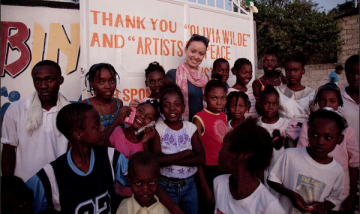 She played a surgeon on the Fox TV medical drama House, but New York-born actress Olivia Wilde has participated in the real thing in the most dire circumstances in her beloved Haiti, through her work for Artists For Peace And Justice (AFPJ), a non-profit founded by filmmaker Paul Haggis.

“I really can’t be that helpful when it comes to medical care, but I did put on scrubs and helped the nurses,” Wilde tells Samaritanmag of the time she mobilized medical support through Artists For Peace And Justice following the country’s disastrous 2010 earthquake.

Wilde witnessed some medical miracles, including the repair of a three-year-old girl’s  hand that had been badly bitten by rats at a refugee camp, which she wrote about in her Huffington Post blog in 2010. And then came the aftermath, when a shocked country had to rebuild, and a generation of children faced an uncertain future.

“We decided to support organizations on the ground, which in my opinion is the most effective way to help, and we focused on education,” says Wilde, who currently stars in the Ron Howard film Rush.

Artists For Peace And Justice was launched in 2009 after Haggis met Father Rick Frechette, a U.S. doctor and community leader working in Haiti who operates the St. Luke Foundation, which provides education, medical care and dignified humanitarian outreach to over 150,000 people per year through key programs employing over 900 Haitians, according to its web site.

Artists For Peace And Justice’s mission is “committed to long-term, sustainable development in direct partnership with the Haitian people,” it reads on its web site. “Our model is simple: we believe in empowering local communities, fostering economic growth, and the power of education to change a nation.”

Its crowning achievement thus far is the Academy for Peace and Justice, the first free secondary school in Haiti, based in Port au Prince. It is funded by AFPJ and managed and directed by the St Luke School Committee. It currently serves 800 students and will eventually serve 3000, according to St. Luke’s site. “Next we’re building an arts university in the South of the country,” Wilde says.

Wilde first visited Haiti at age 3 with her parents. “Haiti is fantastic,” she says. “I actually used to draw pictures of Haiti in school. It really stuck with me.”

Her philanthropic efforts with AFPJ began in 2008. But she says, “with the earthquake, the organization changed enormously. Hundreds, thousands of kids who wouldn’t be in school without our programs are getting an education. Hundreds of operations were done after the earthquake that couldn’t have been done without our donors. There have been so many satisfying success stories. It’s important to know that Haiti isn’t just about tragedy.”

“I feel lucky to have been welcomed by the aid work community,” says Wilde, who has begun to turn her attention to the need for schools in Africa as well. “I was in Senegal, and I was just in Kenya shooting a documentary.

“I have learned that it is the most frustrating work to be in. It can seem like sweeping sand at the beach, but it is what keeps me sane.”