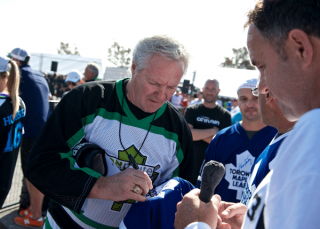 The day (Sept. 28) — pulled off with the help of hospital staff and legions of volunteers — featured 135 teams, each of which raised a minimum of $10,000, participating in a dawn-‘til-dusk road hockey marathon. Many of the NHL alumni acted as team captains or coaches.

“Everybody has been touched by cancer somewhere along the line and that’s why it hits home on a personal and an emotional level for me when you get involved in something like Road Hockey to Conquer Cancer,” Sittler tells Samaritanmag. “It’s a great charity. Princess Margaret Hospital makes a difference in so many peoples’ lives as far as treatment goes. But the research that goes on there into finding a cure is also pretty incredible.”

Sittler was invited by hockey author Kevin Shea, whose books include Toronto Maple Leafs: Diary of a Dynasty, 1957–1967 and brand new Crossing The Line, about and co-authored by Derek Sanderson. He’s also a staff member at the Hockey Hall of Fame — and happens to be the associate director of public relations for the Princess Margaret Cancer Foundation.

“I am here in Toronto; it’s a hockey-related event, and I played ball hockey as a kid, so when Kevin asked me to participate it was a no-brainer,” says Sittler, who still works for the Toronto Maple Leafs in a community relations capacity.

Looking for a cool way to engage a broader cross-section of the community as part of a large-scale, one-day, enjoyable fundraising event, Shea — who also used to work as a music publicist — has dug into his extensive contact list to enlist people for the past three years of Road Hockey to Conquer Cancer. Besides NHL alumni Sittler, Coffey and Dionne, players have included musicians Dave Bidini of Rheostatics and Triumph’s Mike Levine; Olympians David Pelletier, Cheryl Pounder and Ross Rebagliati; media personalities Dean Blundell, Stephen Brunt and James Duthie; and former Toronto Blue Jays Greg Zaun and Kelly Gruber. 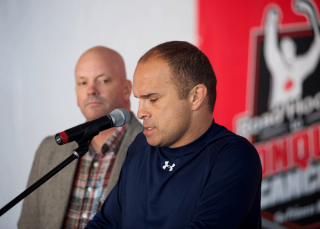 Other NHL alumni were brought in thanks to Scotty McKay, a former equipment manager for the Toronto Maple Leafs who was diagnosed in 2012 with myeloma, a cancer of plasma cells, and is being treated at The Princess Margaret Hospital. “He said he wanted to give back and that just made my eyes light up. He had access to guys that I just couldn’t reach,” Shea tells Samaritanmag, adding that more recent former Maple Leafs, such as Tie Domi, Bryan Berard, Gary Roberts and Mike Johnson either promoted or participate in Road Hockey to Conquer Cancer thanks to McKay.

Shea explains that each team played five games over the length of the day, with the opening games starting around 7:30 a.m. and festivities wrapping up around dinner time — much like a day of road hockey would be like in any community across Canada — with appropriate refreshment breaks, of course.

“Teams were predetermined before the day began,” says Shea. “There were two distinctly different ways to put a team in. There were the grass roots teams from various walks of life; guys like myself, where one guy would grab 10 or 12 of his buddies and put in a team. And a lot of the teams came from the corporate world.

“We had a chief hockey officer here in the office and he would literally knock on doors and talk to the likes of Scotiabank and see if they would buy into the concept and they would fill the team on their own, whether it be with employees or customers or whatever. In some cases the players raised their own money, in some cases the company matched what employees raised, or even supplied the entire registration fee. 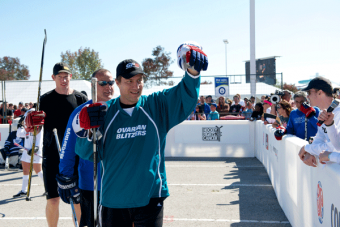 The top fundraising teams were able to select which NHLer or other known personality would be their captain/coach (not all played in the games, but most did) in a draft format.

Sittler was the first name chosen, and the event and the cause it supports have a great personal resonance for the Hockey Hall of Famer and NHL record holder, as he lost his first wife Wendy to colon cancer over the Thanksgiving weekend in 2001 and his mother Doris died two summers ago.

“Sometimes all you have to do is just sit there and listen to somebody without saying a word; just giving them an opportunity to share and get their emotions out,” says Sittler. “That’s important for me and that’s why I did this event. Plus, I want to promote awareness of early detection. As soon as Wendy was diagnosed, we got involved in a program to create awareness off colon cancer, which is the number two killer of both men and women in Canada, and yet it’s 95 percent preventable.”

Sittler has always participated in charity events, from his first days with the Toronto Maple Leafs in the 1970s through to today, and continues to be inspired by the courageous example of Terry Fox, whom Sittler befriended while the young B.C. man was in the midst of his cross-Canada Marathon of Hope. He remained in contact with Fox until mere days before he died on June 28, 1981, after a recurrence of cancer.

“I guess when he was growing up he liked what I did on the ice and I was one of his favourite players,” Sittler says. “Here’s this young guy, he loses his leg but he’s running across Canada. He was my inspiration then and continues to be to this day. You look at this guy and instead of staying home and feeling sorry for himself, he got out there and tried to make a difference and he made a huge, huge difference.

“He had so much courage and dedication and was so inspirational and yet he was a totally humble guy. He didn’t do it for any recognition for himself. To me, he is one of the greatest Canadians ever.”

“My mom died of brain cancer five years ago and we were at The Princess Margaret [Hospital] for a meeting there,” Levine tells Samaritanmag. “She decided not to do anything because she thought, ‘What’s the point?’ She was terminal and just decided she didn’t want to be bald and spend her time in a chair. But we saw that Princess Margaret does great work. You can’t deny that it is probably the best cancer hospital in the world, and they’ve got great researchers. I thought it was just such a great event to participate in, and a great cause.”

Levine said from the moment he and fellow Triumph bandmates Gil Moore and Rik Emmett reached a modicum of success, they began to give back to the community.

“We gave the proceeds from one of our Maple Leaf Gardens shows to charity, and that was a couple of hundred grand. We also supported a lot of smaller charities that wouldn’t get the big dough, like women’s shelters and things like that — very specific, community-based causes and organizations, because we knew exactly where the money was going, and that it would have a direct impact on the people who needed it.” 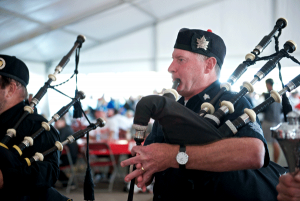 In the case of Road Hockey to Conquer Cancer, the $2.3 million will go towards what The Princess Margaret calls ‘personalized cancer medicine,’ says Shea. This multi-faceted approach features cancer experts designing unique, individualized cancer treatment arcs for each patient, with the money going to a combination of cutting edge investigative research, diagnostic programs and practicall treatment options.

“In the old days, with something like breast cancer, everyone was treated the same way,” says Shea.  “Now they are realizing that not everyone reacts to chemotherapy or radiation, or the same kind of chemo or radiation, in the same way. This is a more specific approach to treatment that means saving more healthier tissue, targeting the care and treatment to the specifics of each case and saving more lives as a result.”

In the future, Shea would like to see Road Hockey to Conquer Cancer expand outside of Toronto. A smaller scale event, unaffiliated with the Toronto one, took place the week before in Vancouver to benefit the BC Cancer Foundation with funds going directly to support cancer research at the BC Cancer Agency.

“We had a number of cancer organizations here in Canada and two from the U.S. come up to monitor the event,” says Shea. “They love what we’re doing, and they wanted to see how it was done and were evaluating whether there was application for it in their marketplace. Our goal would be for it to be like the Terry Fox Run, and have it at a number of locations on the same day around North America. There are hockey fans in every town, especially in Canada, and road hockey is ubiquitous.”