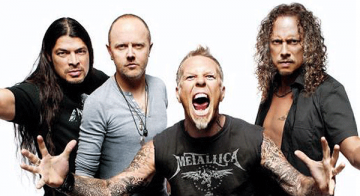 The members of Metallica have a range of causes that are important to them. Some we hear about, many we don’t. On this particular day, speaking with Samaritanmag, singer-guitarist James Hetfield mentions the family unit and MusiCares; a different day, he might’ve mentioned others. Guitarist Kirk Hammett cites the Surfrider Foundation.

The Los Angeles-formed metal band, which has sold more than 100 million albums over the past 30 years, like to keep their philanthropy quiet. We only hear about it if it’s a band thing, like when Hetfield, Hammett, drummer Lars Ulrich and bassist Robert Trujillo donated $21,000 to Montreal community services organization Sun Youth. The amount was a portion of the proceeds from a pair of 2009 concerts. Metallica apparently did that on every stop on their tour, donating locally.

Last summer In Vancouver, the third concert Metallica did at Rogers Arena for the filming of their new 3D concert film, Metallica: Through The Never, was just $5 a ticket and all the money went to the Greater Vancouver Food Bank.

“We support things like that communally,” Ulrich tells Samaritanmag, “But in terms of politically, the band shies away from doing anything together. We don’t shout it from the rooftops. I think a lot of times it can get close to self-promotion. So lots of different things we support, but primarily individually.”

Hetfield says due diligence must be use before supporting or vouching for a charity.

“It really has to be legit,” Hetfield tells Samaritanmag. “In my eyes, there’s a selfishness to charity; people don’t want to investigate; they just think, ‘I’m going to give money away to something and, man, I feel so good.’ That’s kind of a selfish thing. You don’t know where that money is going. It could be intercepted by rebels in the country; you know, all of that is cliché but it’s true; that stuff does happen. So seeing it through is pretty difficult unless it’s a reputable charity or you’re giving directly to someone.

“Causes for me? Family. Family,” says the father of three. “Keeping the family together, strong, healthy. Honesty — raising your children with good morals and values; teaching your kids to be good people and to give.”

Hammett, a horror memorabilia collector, who last year donated money from his Too Much Horror Business book launch in San Francisco to the Mission Cultural Center For Latino Arts, says Surfrider is the cause of prime importance to him. The Malibu, Calif.-based Foundation protects the oceans and beaches in 18 countries.

“I peed in the ocean, last week. Sorry,” quips Hetfield, teasing his bandmate.

“Sharks are attracted to urine,” Hammett fires back.

“The other thing that I have been involved in is MusiCares,” adds Hetfield, now that the conversation kick-started thoughts in this area.  “It’s for musicians that are struggling with addictions, helping them to see the positive side of their creativity, instead of being stuck in the dark, and turning them in the right direction.”

MusiCares was established by the National Academy of Recordings Arts and Sciences (NARAS), which puts on the Grammy Awards. It provides a safety net of critical assistance for music people in times of need, including services and resources covering a wide range of financial, medical and personal emergencies.

Hetfield who sought help for his alcoholism in 2002 — documented in the 2004’s film Some Kind of Monster — says that others struggling with similar problems sometimes comes to him for advice.

“We find that on the road a lot. It’s pretty amazing the next generation of musicians and kids; I mean, my kids are so much more open than I was and I thought I was more open than my parents were, so it’s getting better and better. People are more accepting of people’s differences; people are accepting of other’s diseases and struggles and so I find that there’s a lot of help in the next generations.”