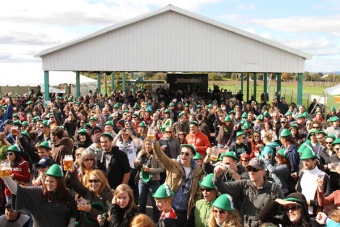 Held in the small town of Vanleek Hill, Ont. the hometown of Beau’s located 50 minutes east of Ottawa, the two-day beer bash, now in its fifth year, features beer, food, more beer, a midway, even more beer, and a festival, this year headlined by top Canadian artists Kathleen Edwards and pop-rock band Sloan.

“It started off literally with a bunch of people in the front lawn of the brewery, drinking beer and tossing a keg around, and it’s turned into something really wonderful,” recalls Steve Beauchesne  who co-founded Beau’s All Natural Brewing Company in 2006 with his father Tim.

“In 2009, our seasonal beer was a Märzen, which is a traditional Oktoberfest lager, and at the last minute we thought it would be fun to throw a traditional Oktoberfest party,” he tells Samaritanmag. “We literally placed a bar out on the front lawn, and to people that showed up to the brewery that day, we gave away samples. We had such a great reception that year that we decided to do it in a bigger fashion.”

“We have a very social and ethic attitude towards the way we run the business, so pretty much anything that we do event-wise or promotion-wise has a fundraising component to it,” Beauchesne explains. “But from the very first we thought it would be great to make this our signature fundraising event.”

As for the choice of charities that receive the donations, Beauchesne says his company likes to spread the wealth.

“We try to say yes to everyone we possibly can,” he admits. “Doing this fundraiser is one of the few times where we’re in the driver’s seat.

So there’s a mix of charities that make a lot of sense because they’re either local or they’re food-oriented. Then there are also some that are near and dear to our hearts — I really like KIVA Micro-Lending program, while Kathleen Edwards’ suggestion was Canadian Canoe.” 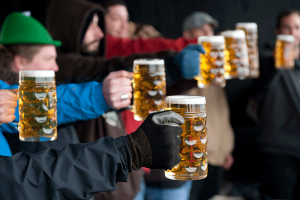 Beauchesne says that specific events are designated to specific charities.

For example, a midway section — with games to win prizes — was created and run by Just Food, so they get 100 percent of that revenue. Both the raffle and a dunk tank filled with beer raised money for ReThink Breast Cancer. Beau’s All Natural Brewing Company also created a program where cyclists ride from Ottawa to the brewery, and the money they collect from sponsors heads to the United Way (they get bussed home at the end of the day after enjoying the rest of the Oktoberfest).

Even patrons who filled up their mugs at the beer stands contributed to the cause. “Sales of beer get split between many different charities,” Beauchesne says.

There was also plenty of music: joining Edwards and Sloan on the bill were The Sadies; Rich Aucoin; Young Rival; The Balconies; The Mahones…and what’s an Oktoberfest celebration without the Grammy-winning polka king himself, Walter Ostanek?

You can download a free “mixtape” featuring 15 songs — including all the 2013 performers  — on the brewery’s web site (available for three months), but Beauchesne says this particular mixtape serves as more of a celebration sampler to support independent music.

“What we do with the Mixtape — and I guess that’s not fundraising in the traditional way — but we really like to support independent music,” he explains. “We’ve decided not to monetize this because it would take away from the original intent of the project.”