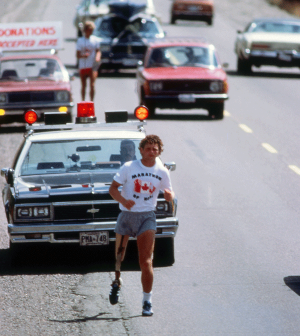 Thirty-three years after his Marathon of Hope inspired Canadians, Terry Fox remains one of the country’s finest examples of both athleticism and altruism. Terry Fox Runs continue to make millions of dollars around the world each year in support of cancer research programs. However, even though thousands of Canadian students in elementary and high schools run with their school in honour of the young man from Coquitlam, B.C., the Terry Fox Foundation (TFF) recognized a lack of participation among university students.

The TFF launched Terry’s CAUSE On Campus, a new initiative poised to reengage students at Canadian colleges and universities about the passion and determination of a man who was close to their age when he turned his struggle with cancer into a miraculous success (CAUSE stands for College and University Student Engagement).

Now in its second year, 23 post-secondary schools across the country are coming together to fundraise for the TFF during Frosh weeks and beyond. That is up from 10 schools in 2012.

“Terry was defined average, really, in terms of his ability both as an athlete and also as a student,” Darrell Fox, Terry’s brother and a senior advisor at the Terry Fox Research Institute (TFRI), tells Samaritanmag. “So I think that in itself can be quite inspiring to those pursuing a university education, to know that here was this average kid from a small town in B.C. who was able to excel through determination and hard work.”

Fox ran his Marathon of Hope during his final year at Simon Fraser University, and the runs in his name every year since have raised more than $600 million worldwide for cancer research. Terry’s accomplishments and his spirit of giving still inspires Canadians, especially students, says Martha McClew, Ontario’s director of the TFF.

“Whenever I talk about Terry to people of any age, I always say, ‘He was only 21 when he did this. By his last Christmas, he had raised $24 million, and he had no money to buy his mom a Christmas present,’” McClew tells Samaritanmag. “That kind of devotion to something has resonance. In the last decade, I’ve noticed things like Free the Children and organizations that empower youth are starting to appreciate what Terry Fox was about.”

Terry’s CAUSE is not just a fundraiser, but has a goal to foster community spirit on Canadian campuses and inspire generations of students, including foreign-born ones who may not know Fox’s story. The initiative stemmed from the efforts of a few universities, such as Western in London, Ont., which has hosted Frosh week events to fundraise for the TFF since the early 1990s. “I think Western has raised close to a million dollars for the Terry Fox Foundation over the years,” McClew says.

Fox and other senior advisors reached out a few years ago to various universities to see if there was support for campus fundraisers in Terry’s name. Each of the 10 schools they contacted for last year’s launched agreed to host events. “Initially, the title was National University Run Day, or NURD,” Fox says. “But we wanted to remain inclusive and also reach out to colleges. So the title evolved.” 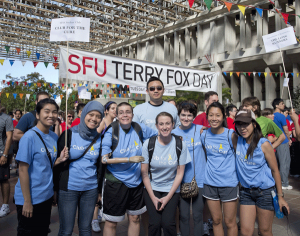 Last year, efforts from the 10 participating schools brought in $130,000 for cancer research. While these fundraisers can culminate with the Run — held annually in September and October across the country — schools are encouraged to keep doing activities year-round.

This August, 20 students from Mount Allison University in New Brunswick raised money in a different way: they climbed and summited five of the tallest peaks of the White Mountains in nearby New Hampshire. The height of each mountain combined is greater than Mt. Everest. The trek had a fundraising goal of $30,000 and raised awareness for the TFF in the United States.

The launch of Terry’s CAUSE at 13 new schools this year coincided with a major breakthrough from the TFRI. The institute led a study that developed new clinical risk calculator software. The clinical risk calculator can show, nine out of 10 times, the abnormalities appearing on a CT scan that need to be treated first and the ones that do not. The software, which shows the spots or legions that are either benign or malignant, will help with early detection and could save the lives of many.

The results were published in the New England Journal of Medicine earlier this month, and conclude that the software is set to improve lung cancer screening programs. Lung cancer kills more than 20,000 Canadians every year, and is the primary cause of cancer deaths in the country, according to a Terry Fox Research Institute study.

“This was one of the first projects [the Research Institute] funded together with the Canadian Partnership Against Cancer. It could potentially help to reduce mortality by 20 per cent going forward,” Fox says. “This is very exciting. In most situations, when you’re diagnosed with lung cancer, it’s terminal.”

In celebration of the new schools joining Terry’s CAUSE, some universities are teaming up together to do citywide events. In Edmonton, students at the University of Alberta, NAIT and MacEwan will be hosting an event together. Meanwhile, in Southern Ontario, rival schools Wifrid Laurier and the University of Waterloo are joining fundraising forces on Oct. 5 for a 1 km, 2 km and 5 km run/walk. 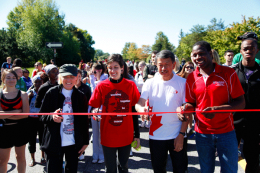 “That [teamwork] is a neat thing for us, because I don’t think you normally see universities come together unless they’re competing,” McClew says. “It will be even more fun to have as a big a group at possible.”

The goal is to have every university and college across Canada partaking in events to honour Terry’s legacy, Fox says.

“What Terry accomplished physically and mentally defies logic, and I witnessed it,” says Fox, who joined his older brother on his three-month Marathon in 1980. “I lived more life in those three months than I have in 33 years since. It’s always frustrating to try to articulate it. I always fail. Words cannot describe what he accomplished, so just to see that the story’s still relevant, that it’s still embraced, is wonderful and exciting. I go back there every day of my life and I learn from it.”