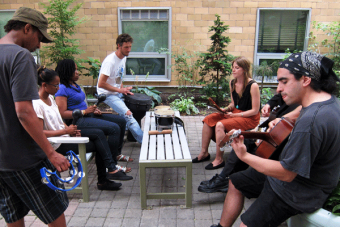 For a long time, the Canadian music industry’s charity of choice, MusiCounts, operated by the Canadian Academy of Recording Arts & Sciences (CARAS) which puts on the annual Juno Awards, has given grants to qualifying schools across the country to purchase musical instruments for their music programs.  Now, thanks to an initiative spearheaded by musician Kevin Drew of Broken Social Scene, MusiCounts has expanded the program to include under-served communities.

Partnering with TD Bank Group, the inaugural recipient of the new MusiCounts TD Community Music Grant is Toronto’s Sketch Working Arts for Street-Involved and Homeless Youth, which is run out of the Masaryk-Cowan Community Centre in Parkdale until their very own building is ready in 2014.

Founded in 1996, Sketch’s mission is “to engage young people who live homeless or on the margins to experience the transformative power of the arts, to build leadership and self-sufficiency in the arts, and to cultivate social and environmental change through the arts.”

Tomorrow (Aug. 27), Drew will be on hand to perform with Sketch youth and present $20,000's worth of music equipment at the invitation-only presentation.

Sketch is one of 15 community groups that were selected out of 120 applicants to receive the grant. A total of $200,000 will be distributed this year.

Drew, a founding member of indie rock collective Broken Social Scene and co-owner of successful record label Arts & Crafts (Feist, Broken Social Scene), approached MusiCounts nearly two years ago with his idea, according to the press release. “His intent was to help MusiCounts create support for programs serving at-risk youth that may not be exposed to music education and discovery through their schools,” it reads.

MusiCounts’ mission is to ensure that children in Canada, regardless of socio-economic circumstances or cultural background, have access to music programs through their schools.  According to the press release, “Since the program’s establishment in 1997, over $6,000,000 will have been awarded [by the end of 2013] impacting... an estimated 520,000 students, their schools and communities, from coast to coast.”

The MusiCounts TD Community Music Grants provide musical instruments and equipment to community centres, after-school programs and other community non-profit organizations, ultimately putting instruments into the hands of youth that need them most.   In 2012, TD donated over $65 million to support community organizations in Canada, the United States and the United Kingdom.