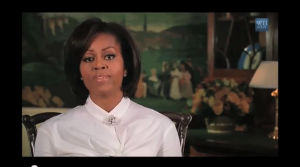 Michelle Obama isn’t rapping or singing, but the First Lady does appear and talk in the video for “Everybody,” featuring Jordin Sparks, Doug E Fresh, Dr. Oz, Ryan Beatty, Artie Green and The Hip Hop Doc.

The song, available for free download, is from an album called Songs For A Healthier America, produced by Hip Hop Public Health and the Partnership for a Healthier America.  Titles include “We Like Vegetables,” “Veggie Luv,” “Hip Hop L.E.A.N. (Learning Exercise and Nutrition in Schools)” and “U R What You Eat.”

“We hope these songs get your whole family moving to the beat!” it says on the web site. Michelle Obama will appear in 10 videos that will be distributed to schools.

In additon to Sparks and Fresh, the 19-track album — for which teaser versions can be heard and eventual full downloaded versions will be posted — includes contributions from Ashanti, Matisyahu, blink-182’s Travis Barker, DMC (of Run DMC), Nils Lofgren (of Bruce Springsteen's E Street Band), Monifah, Ariana Grande, Ryan Beatty, and many others (see full list below).

According to the site, "The Songs for a Healthier America album, brought to you by the Partnership for a Healthier America and Hip Hop Public Health, is the result of an innovative collaboration between musicians, physicians, public health researchers, entertainment industry professionals, health advocates and school-aged children. The album and its accompanying curriculum toolkit are designed to inspire and educate children to eat healthy and exercise regularly as part of our collective fight against childhood obesity."

Let’s Move! was launched by First Lady Michelle Obama, with a goal to solving the problem of obesity within a generation, so that children born today will grow up healthier and able to pursue their dreams. The initative focuses on five pillars: creating a healthy start for children; empowering parents and caregivers; providing healthy food in schools; improving access to healthy, affordable foods; and increasing physical activity.

The tracklisting for Songs For A Healthier America is:

“Give Myself A Try,” feat. Ryan Beatty

“Jump Up (It’s a Good Day) Let’s Move Version,” feat. Brady Rymer and the Little Band That Could

“Change the Game,” feat. The Happiness Club and Naledge

“Mother May I?” feat. Amelia Robinson

“Get Up Sit Up,” feat. Ian James and Ricky Baitz