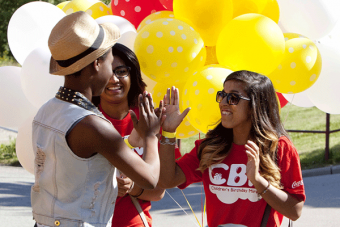 Sheliza Kassam has an entrepreneurial and philanthropic spirit. The effusive 16-year-old has established her own non-profit to throw birthday parties for kids living in shelters who would otherwise not celebrate their special day.

The seeds of Kassam’s fledgling organization, Children’s Birthday Miracles, were planted in 2010. For her 13th birthday three years ago, the Calgary teen decided pay it forward: she and her family helped feed families at their local shelter.

The year before, Kassam had an allergic reaction to her birthday cake; when she became upset, her parents reminded her not all kids get cake on their birthday. The following year, instead of cake, the Kassams donated a meal to Inn from the Cold. It was a gesture repeated for three consecutive years every January 24, on Kassam’s birthday.

“And after three years, thinking ahead to my 16th birthday, I decided to do something really special,” Kassam tells Samaritanmag. “I wanted to ship some presents to someone in need whose birthday also fell in January but I couldn’t find an organization in Canada that did that. So I thought, ‘Why don’t I start one?’

“So I emailed Inn from The Cold, which was the homeless shelter I’d been working with, and they were totally interested. We had a meeting and the next thing you know Children’s Birthday Miracles was created.”

Since February of this year, Children’s Birthday Miracles has organized monthly parties for kids at the shelter, complete with cake, entertainment, gifts and the like. Various major sponsors, from Coca-Cola to McDonalds Canada, have lined up behind Kassam to help bring a measure of joy to disadvantaged youth.

“The kids are so grateful for the birthday parties,” Kassam says. “There was one kid who was extremely sick and his parents weren’t even there for him because they were too worried about other things and daily life is obviously stressful. We had a magician in and he made that kid feel so special. These parties allows these kids to receive attention that they normally wouldn’t receive.

“But one thing that really inspired me was not so much a child but one of the parents. Before she was about to blow out the candles on a cake, she wished for a home and I think that really touched all of us. That birthday wish is so powerful; a chance to wish for a miracle, something they have never wished for before. And that’s sort of how I saw it, saw the power of a birthday. That’s what really sparked me to start this organization.”

As she explains it, Kassam has been charitable her whole life, beginning at age five when she began volunteering in her mosque. “That played a vital role in who I am today.” 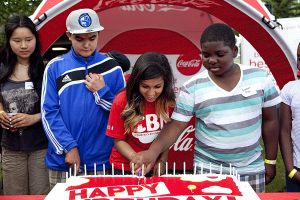 Last June, Kassam was one of 16 individuals and groups honoured at Calgary city hall for achievements in making the city a better place, bagging the Community Achievement Awards Youth category. Coca-Cola, meanwhile, specifically cited Kassam along with two other young Canadians for her “personal mission to create more happiness in the world" as part of the company's multi-pronged and ongoing kindness marketing campaign.

Kassam comes by her charity honestly. She and her family have for years been part of a drive hosted by Lions Club International to collect used eyeglasses for donation mostly to developing countries. But hosting the monthly birthday parties is clearly Kassam’s passion.

Earlier this month, Kassam and her crew of “ambassadors” or youth volunteers hosted a bash at a local Calgary amusement park. “It was so successful,” she enthuses. “We had over 200 people come [in this instance, teens were drawn from various youth programs beyond the shelter]. We had cotton candy, snow-cones, a magician, and food items. And so that was awesome, especially after the big flood we had.

“The party allowed the kids to have a nice day to relax, and the parents didn’t have to worry about providing their kids with entertainment. Coca-Cola found us on the Internet and decided to sponsor us, to rent this amusement park and 44 teens celebrated birthdays. The cake was huge and it was just a great day to celebrate at Calaway Park.”

She continues: “We actually became international three months ago. We are now providing birthday parties to orphans in Dar es Salaam, Tanzania. I had created a Facebook page — which just shows the power of social networking — and my aunt Shaifa Hirani who lives in Tanzania found out about Children’s Birthday Miracles and just started asking me questions about it and was interested in starting it up there.

“So we donate money from here in Calgary over there so she has enough resources to start things up. In September, she will be doing a party for children with disabilities, so they can have a birthday party. One of our ambassadors will also be doing a party in Peru this month.”

Asked whether she sees herself parlaying her charitable outreach into a career, the bubbly teen doesn’t miss a beat. “I’ve always dreamt of starting a business. And what goes hand-in-hand is giving back to charities.

“I want to continue on with this organization that I’m really passionate about so I want to do this as well as start a business. And I was also thinking of becoming an optometrist and maybe starting my own business and maybe joining Doctors without Borders program. The eyeglasses donation my family did got me interested in that.”

And what would Kassam say to teens who claim to be too busy to give back to their communities?

“I started this organization because I want to challenge the idea of youth apathy and turn it into youth empathy. Kids need to step into other people’s shoes and realize what’s going on in today’s society.

“We encourage people to join Children’s Birthday Miracles’ ambassador team which is filled with diverse youth and these youth get the opportunity to go to the birthday parties and talk to these children and their parents to understand how fortunate they are and how much they’ve been given. Having a home, an unlimited supply of food, all these things we take for granted.

“Even something as small as giving sandwiches to a homeless shelter gives you a new insight on life.”