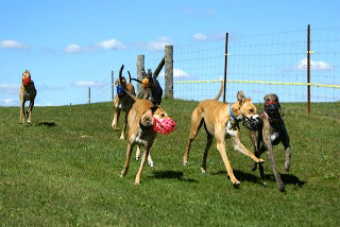 With the possible exception of pugs, perhaps no breed of dog inspires such ecstatic devotion in their owners as greyhounds, those sleek, narrow, elegant sighthounds able to trace their lineage back thousands of years across multiple cultures.

Used throughout history for hunting and more recently and contentiously, for competitive racing, greyhounds nevertheless remain beloved companion animals invariably characterized as gentle, obedient and loving. So it’s no surprise that a small-scale industry of sorts dedicated to finding homes for retired racing greyhounds flourishes in every corner of North America. An estimated 10,000 need homes each year.

Whatever one’s opinion on dog racing — and there are plenty to go around on both sides of the issue —retiring greyhounds need homes. And while adopting these dogs is a markedly different experience than adopting a puppy (they’re adults that have never seen kids or cats, climbed stairs, etc…), it’s a venture well worth the effort, multiple sources who spoke to Samaritanmag about the subject made clear.

“It’s important to stress that we remain neutral on the subject of dog racing. Our focus is simply to find good homes for retiring racing greyhounds,” says Melissa J. Cook, president since 2008 of the Greyhound Project, Inc. a volunteer, non-profit organization based in Massachusetts (and formed in 1992) that provides one-stop information about — and promotes the adoption of — retired racing greyhounds across the U.S. and Canada.

Cook — a marketer by trade who also founded the Boston-area networking and post-adoption support group, Greyhound Adventures in 2005 — first fell in love with the breed in the late-1990s while working on a photo shoot where a couple of the dogs were present. “They were like living art,” she says, “and they were just fascinating to me, and so beautiful.”

Her first greyhound, a retired racer named Avalanche, cemented her devotion.  Thunder the greyhound soon followed. Her experience is typical.

Toronto realtor Stephen Lounsbury got into greyhounds at the behest of his partner Doug Gladwin who was a fan of the dogs. The couple has adopted three retired racers — Sybil in 1999 at age four (who had raced in New Hampshire), Halo in 2000 at age two-and-a-half (Florida) and Riggles in 2011, also at age four (Alabama).

Lounsbury acknowledges some former racing dogs have sad back stories. “When they are racing, the dogs are kept in cages for 23 hours a day,” he says. “By the time you get them, they’re so forgiving. They just want you to pet them and they want a comfortable bed to lay on. Halo came from an environment where she was beaten, so she was scared of everything.” 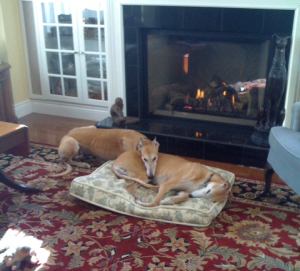 Yet asked to provide five adjectives about the breed based on his three females, Lounsbury doesn’t hesitate: “Loving, lazy, cuddly believe it or not. You see pictures of these muscular dogs but they’re so… affectionate. That’s four. And wacky. They’re kooky.

“And I’d highly recommend both the breed and adopting through an agency,” says Lounsbury who worked with Mount Elgin, Ontario's Greyhound Relocation and Adoption Canada when adopting Halo and Riggles. Sybil came from a former breeder.

As Aston explains, Needle-Nose doesn’t actually board the dogs — most coming from the U.S. — but rather serves as a kind of middleman, helping to screen potential adopters here while facilitating adoption through agencies or breeders stateside.

“The way most of these groups work, including ours, is people hear about us from the website, do some research about the dogs. Would-be adopters submit an application; Needle-Nose gives a home visit to make an assessment about the fit and explain about the dogs; and then we prepare what we call a ‘profile’ to help match a dog to a family.

“That profile is sent to our contacts in the States who will try and pick out a dog [from their available roster of retirees] that matches a certain family’s requirements. Those dogs are then brought to Canada, and fostered for about a week by someone from within the Needle-Nose group to ease the transition from working dog to family pet.”

Currently, Needle-Nose — which Aston reckons has successfully placed 139 dogs since launching in 2006 — works with Kathy Bowman who operates a kennel in West Virginia and “acts as intermediary between the tracks and owners and adoption groups. So Kathy gets the profile and will fulfill either from the dogs she has on hand or through her own network of contacts.

“In that case, we meet about halfway between Hamilton and West Virginia — about a nine-hour drive — to get the dogs,” Aston says, noting that Bowman’s kennel “doesn’t really have a name as it’s just on her property in the country and she does it on a volunteer basis as well. But we’ve been doing that for about a year-and-a-half.”

Previously, Needle-Nose worked with Greyhound Pets of America; Dennis Tyler, president of the South Central Florida chapter, would take dogs on the road with his trailer — sometimes upwards of 40 at a time, according to Aston — liaising with adoption groups from the U.S. and Canada along the way.

Aston is adamant that greyhounds, especially retired racing greyhounds, make exceptional pets. “They’re so quiet, not yappy. And they’re very loving and sensitive. They want to please. They’re great with senior citizens for those reasons. But they’re similar to people in that they are all unique and have their own personalities — some are more outgoing, some are shy.” 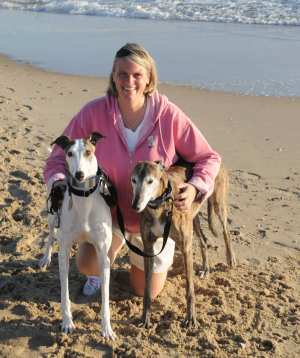 It’s a sentiment the Greyhound Project’s Cook echoes. “These dogs are so incredibly gentle. And you can link almost every other breed of dog back to the greyhound at some point. In addition to their amazing athletic talent, they are incredibly sweet and easy to train and to live with. They’re short hair so they tend to be low-allergen. You really just can’t help but to fall in love with them.

“The life expectancy for a greyhound is usually 12 to 14 years and most often they race until about age five; they deserve a good place once their careers are done.”

Asked how many dogs are involved in the racing industry, Cook says, “No one tracks statistics specially.

“I do know that over the last few years racing has been declining in popularity and the number of tracks operating has shrunk but at one time it was thought there was between 20,000 and 25,000 greyhounds needing homes each year. Our best guess now it probably closer to 10,000. But we can’t verify that.

“As to why the numbers are shrinking, I think it’s a combination of racing losing popularity and some political pressure to shut down tracks in different areas of the country. And look – in any industry there are good people and bad people and you can always find horror stories. But a dog that is not healthy is not going to win races or make money so those racing the dogs do have a vested interest in the health of the animals.”

Everyone Samaritan spoke with stressed that due diligence on the part of would-be adopters about the dogs’ idiosyncrasies — plus a little forbearance  — is key to a happy and successful retired racing greyhound adoption.

“With a little bit of time, you can get them to understand things like climbing stairs, not being terrified of the sound of a vacuum cleaner, learning to be house-broken,” Cook chuckles. “It takes some patience and understanding. But they make wonderful pets.”