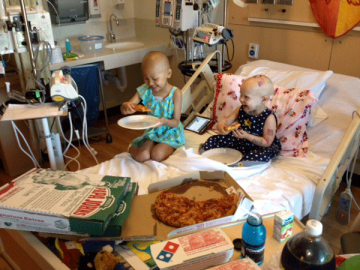 Never underestimate the kindness of strangers, especially in the Internet age. That’s the mantra of California’s Hammersley family, who learned first-hand that a modest request for something — like pizza, for instance — can prompt swift and serious response.

It began about a week ago at Children’s Hospital in Los Angeles where two-year-old Hazel Hammersley is battling stage 3 high-risk neuroblastoma, a depressingly common form of solid tumor cancer in children and the most common cancer in infancy.

As mom Lauren Hammersley explains to Samaritanmag from her Simi Valley home, the family was wasting time when maternal grandmother Linda Skinner came up with a nutty idea: to place a sign in Hazel’s hospital window reading: “Send Pizza Room 4112.″

“When you’re in the hospital for an extended period of time with a two-year-old, you need to be creative,” Hammersley says. “My Mom was talking about how, when she was a young woman in hospital, someone suggested posting a sign saying, ‘Send pizza.’ Nothing came of it — she never got a pizza — but I said, ‘C’mon, let’s do it!’

“We honestly just thought we’d get someone to wave at us from the street. We never thought we’d get an actual pizza. Two or three days went by and nothing. Then Saturday came, it got posted online and it just went crazy.”

A snap of the sign was posted to social media site Reddit and pizza deliveries began pouring in. Lauren Hammersley stopped counting at 20.

“We never got a final count because they had to stop sending them up to Hazel’s room. There was just too many. And since then the story has kind of blown up. We’ve been overwhelmed and humbled by how many people have reached out to us.”

Hazel’s battle with cancer – which began last spring and has been heartbreakingly detailed on Lauren’s blog, Our Little Hazelnut – has devastated the Hammersley family: dad Aaron, brother Micah (6), daughter Elizabeth (4) and son Jonah (6 months). “Micah understands and is scared for his sister,” Lauren says. “Elizabeth knows something is up, but doesn’t really understand it.”

As Lauren explains, the speed of Hazel’s cancer diagnosis — which, though insidious, is still quite rare with fewer than 700 cases detected in the U.S. each year — was “a blessing.”

“It came in a matter of days.  Most families are fighting for months to find a diagnosis. With Hazel, it started on a Tuesday. She was complaining of pain but she couldn’t really tell me where. The next day she stopped eating and was really lethargic. Thursday she spiked a fever. Friday morning I went to give her some Tylenol and she immediately vomited. And I knew something was wrong. 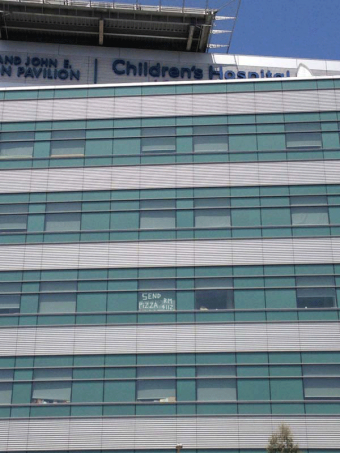 “I took her to her pediatrician that morning and we were sent to the emergency room where they did an ultrasound, found a mass about 10 centimeters in diameter in her right adrenal gland near her kidney and sent us to Children’s Hospital. We were admitted into oncology that night. And they started chemo the following Wednesday.”

Anyone wishing to make a donation to help offset the myriad costs the Hammersleys face is welcome to do so by clicking here or writing to the family at PO Box 1449, Simi Valley, CA 93062 USA.

“This is a very aggressive treatment plan,” Lauren says. “After chemo, Hazel has surgery to hopefully remove the tumor if it’s shrunk enough. Then she has a very high dose of chemo to destroy her immune system, and then a stem-cell transplant to rescue her body and regain a new, stronger immune system. For that she has radiation and after that, immunotherapy. So this is a very long and arduous journey for our family.

“If I were in her shoes I think I’d be lying in bed every day complaining and throwing myself a pity party. But she continues to be this little sunshine. She’s adapted to this new reality: she goes to the hospital and knows what neuroblastoma is; she knows what chemo is; a stethoscope… all these terms a two-year-old shouldn’t know. But she takes it all in stride. She is phenomenal.”

As for the motivation behind her blog, Lauren says, “It’s been really cathartic for me,” confirming that it’s a way of keeping everyone concerned about Hazel in the loop without having to make endless phone calls at the end of exhausting days. “My family and my husband’s family probably account for about 70 people.

“But I cannot wait to show Hazel this blog when she is older with the news stories and all the people who have reached out, who have prayed for her and wished her well. She has inspired so many people.”