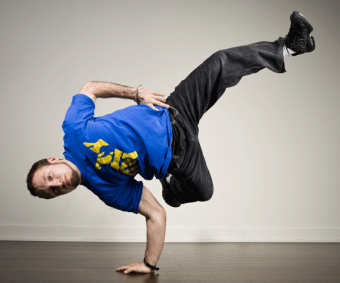 For elite breakdancer Michael "Bboy Piecez" Prosserman, the founder and executive director of Unity Charity, falling down and getting back up again did more than just make him great at popping and locking; it inspired him to give back, using his dancing skills as an innovative anchor for the charity organization.

The 18-week after-school program targeted to grades 9 to 12 (and sometimes open to grades 6 to 8) has reached over 90 schools across Canada and 100,000 youths since 2008. Each week a guest artist comes in to teach students and share their skills. Participants then take these skills and develop them into a stage presentation that their whole school will get to watch at the end of the program.

"Unity Charity is a youth-led and youth-focused organization," Toronto’s Prosserman tells Samaritanmag. "Our mission is to empower youth. We use the elements of hip-hop — breakdancing, spoken word poetry, MCing, graffiti art and beat-boxing — to get kids hooked.

"It's a program that not only does the arts but important lessons about professional skills, presentation skills, leadership skills. It's using the arts as a mechanism to engage the kids, but then filling them up with all this other incredibly critical skill base because often times they would never come into a leadership program. So we're using hip-hop as a hook and leading them to something that will actually benefit their lives down the road and even in the short term."

Prosserman is protective of the kids in the program and refers to them as "youth leaders" because it's a positive, aspirational characterization. And though Unity works in communities he concedes "are considered priority communities by the United Way, and don't have many resources or art space programs or activities," focusing on the good, the potential for the future, is one of the program's fundamental principles.

"Nobody likes to be called or labeled or put into a category that is negative," he explains. "The terminology 'youth leader' really showcases that these kids are really the future leaders of our community, of our city, and they're not some sad story. I really don't like to paint that picture because it doesn't reflect our audience."

Prosserman knows and understands what every youth leader who goes through the Unity program has gone through because he has been there himself.

As a teenager, Prosserman, now 27,  became a star breakdancer. He appeared in the 2003 Jessica Alba movie Honey, won breakdancing competitions around the world ("I used to beat people who were like six, seven years older than me and it used to drive them nuts because I was demolishing them") and been accepted into Cirque Du Soleil's performer pool.

Breakdancing had been an escape for Prosserman, a safe place where he could escape his day-to-day troubles. 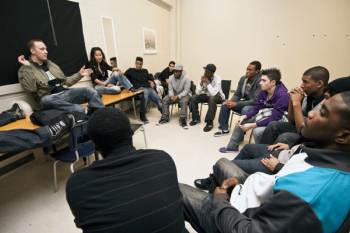 "I started breakdancing when I was 12 and used it as my own stress relief, dealing with my anger as a young person," he says. "My mom had a lot of health challenges she had gone through as I was growing up and I was growing up a little bit faster than a lot of the kids around me. I was the type of kid who bottled up all the stress that I had. I just let it sort of dissolve inside of me and I would miss days of school because I would get sick; I would get a bad stomach with all the stress coming on.

"And when I found dancing, it was a way of pushing the reset button and flushing out all the emotions so I could breathe right — I would hyper-ventilate. So after I discovered that, I also became part of a crew and they became like a second family to me. My breakdancing crew became that second set of support."

But after suffering a severe neck injury in 2005, Prosserman had to make a tough life decision. He decided to shift his focus from competitive dancing to the Unity Charity.

"It was pretty much choosing between going to York University or Cirque Du Soleil, and a lot of people aren't sure why [I chose York]," he says. "They think it's a funny choice, but I thought it was the right choice because I wanted to get an education behind doing something more selfless. When I realized what breakdancing had done for my life, I wanted to share that with other people."

Prosserman had begun this path while still a high school student, developing a class project in grade 11 called "Hip Hop Away From Violence." By the time he got to York that school project had morphed into Unity ("We changed the name to more of a positive focus") and the seeds of what the charity has now become were sown.

"It has grown in leaps and bounds," he says. "When I went to York, we were registered as a university club. And when I was graduating from York I said, 'You know what? I want to do this for the rest of my life,' so we registered as a non-profit and then a charity and then we built the plane while flying it, trial and error, not knowing what we were doing. We were learning and picking ourselves back up again."

And that is what many of Unity’s youth leaders who enter his program do. Though Prosserman admits that many of them could have gone down darker paths — drugs, crime, dropping out of school — without that extra helping hand from the program, for him it's not about looking at the bad that's been prevented, rather the good that's been created.

"Yes, there are tons of success stories in that way," he says, when asked about whether Unity has helped steer youths away from potentially ugly futures. "But I'm much more about telling the inspirational side to their story and not telling about people's tragedies. We're working in communities where a lot of these kids' brothers and sisters didn't go to university, so just seeing that happen is a step in the right direction.” 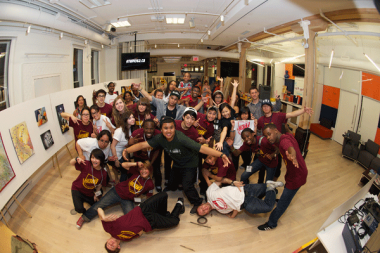 For the actual stage shows the kids produce, Prosserman says, "There's a lot of discussion about the community and a lot of asking about 'What do you want to show someone your own age? They start to realize the power of these events as a tool to communicate information. It's very much 'What do you guys want to say?'

"We coach them; we support them; we make sure they don't really fall on their face — but we let them learn. We're not really holding their hands all the way through it."

Indeed, the messages the Unity performers are trying to make are pointedly their own.

"They are the total creative force," he says. "They make all the decisions, but we help guide them in those decisions. A lot of the time they bring their own cultural identity. For example, in Brampton there's a large Sikh community and they'll have the bhangra dancers jump in with the poppers, have them battle each other for a cool moment — they're not getting along — but maybe later on they do get together and work with each other. You try to draw out a real theme because every school has its own issues."

Unity also runs various drop-in programs across the country and hosts the annual Unity Festival in Toronto, an event that brings international musical talents like Talib Kweli, Kardinal Offishall and members of The Roots together with talent from the Unity program for a series of epic shows.

By sharing the same stages as these high profile international talents the kids who go through the Unity program get to see first-hand what it's like to get down with the pros.  The next one begins Thursday, July 18 and runs until the 21st. Go here for schedule and venues.

Prosserman believes it's an invaluable experience.

"We're promoting positive hip-hop through unity," he says. "So we want to represent that through the artists that work with us and get our people to realize that — just them being on stage with these artists could be the moment that they look back on for the rest of their lives. And that could be enough, that right there, when they're going through hard times, if that's the one positive thing they're thinking about that could help them through some difficult situations."

"A lot of our students and our artists and the people who work with us, all of our stories, where we came from, how much we've overcome — it's all about the amazing things that are happening as a result of getting out of that rut."