Veterinarian Locks Self In Hot Car For Pet Experiment 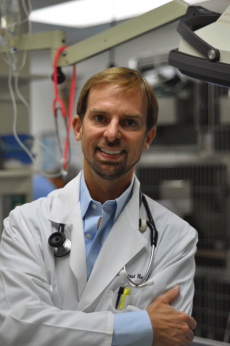 It’s a grimly predictable summertime news story: the hapless pet that perishes in a sweltering car while its owner runs an ostensibly quick but ultimately too-long errand. Just yesterday, a Walmart employee was fired for confronting a customer about leaving his dog in a hot truck. She might’ve lost her job, but the pup didn’t lose its life.

Every year veterinarians implore people to leave their pooches at home during hot summer months. Yet every year, untold numbers of dogs die trapped in vehicles. It’s a ghastly scenario made more vexing by being easily avoidable.

In an attempt to drive the message home once and for all, veterinarian Dr. Ernie Ward took a radical and very 21st century approach to the problem, videotaping himself and an outsize thermometer locked inside a parked car for 30 minutes and posting the outcome online (see video below).

What viewers see is at once unsurprising yet deeply unsettling: Dr. Ward sweats profusely and struggles to breathe as the temperature inside the car rises from 95˚F to a deadly 117˚F in just 30 minutes, despite all four car windows being cracked about an inch and a breeze blowing outside.

As the North Carolina-based founder and chief-of-staff of the Seaside Animal Care clinic — plus author, lecturer and TV commentator (he’s been the featured veterinarian for the “Rachael Ray Show” since 2007) — intones in the clip, “Heat is a lousy way to die.”

Dr. Ward hopes the video — which was posted last July and garnered widespread media attention in places like CNN and USA Today and continues to get coverage — illustrates just how efficiently heat kills.

“To date so far this year, 13 children have died when they were left in hot cars,” Dr. Ward tells Samaritanmag. “In the United States, an average of 37 children die in hot cars each year.

“We have no way of tracking how many dogs and cats perish in hot cars each year. But if 13 human children have died so far this year, I can only imagine the number must be much greater for animals.”

As Dr. Ward explains, the idea for making the video came from watching first-hand while a well-meaning but harried client committed the dog-in-car sin before his eyes.

“I had a client leave two of her dogs in her car while she ran into our clinic to pick up something. She said she’d just be a few minutes. But I am sitting there watching her while a couple of minutes quickly stretched into 10 or 15 minutes. I could see her dogs through our lobby window, and that started the whole conversation of what’s too hot, what’s a few minutes and is there any danger?

“Most people think that if it’s breezy or they leave the windows cracked or park in the shade, these factors will negate the risk. And it’s just not true. There are other factors that may be at play: maybe the pet is overweight or a bit older. Maybe it has thick fur or an underlying medical condition. All of these things can contribute to pets overheating very quickly.”

He continues: “I wanted to experience the emotions… to see how it would feel to be helpless locked in that car. And that’s what I tried to articulate in the video: it’s a really frightening, terrifying, hopeless situation. I can’t even imagine what it would be like to be a dog. It’s a lousy way to die.”

Dr. Ward stresses that even if an animal doesn’t perish outright in heat, the trauma of the situation could exacerbate a hidden condition, resulting in consequences down the road.

“Let’s say you’ve got a 12-year-old Golden Retriever who is carrying a bit of weight and is just on the precipice of kidney failure or heart failure or some other problem. Now you put him in this stressful situation. A month or two later, we may see that manifest itself in the form of another medical problem.

“The advice is so simple: just leave your pets at home during the warmer months. People underestimate their time; two minutes turns into 10 or 15 and as you can clearly see in the video, the temperature rises to well above 100˚ in that time.

“There is no benefit to leaving a dog in a car, especially at this time of year.”