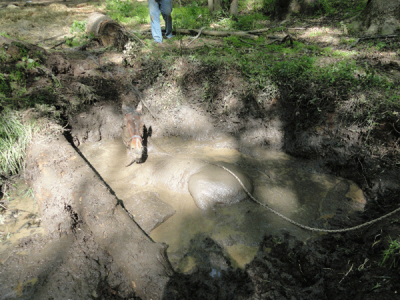 Most would agree that having an emergency preparedness plan for dealing with fire, flood and other disasters and accidents is a sound idea albeit one rarely practiced outside of institutions. Deborah Chute and Dr. Rebecca Gimenez want to change that, possibly saving the lives of horses, livestock and other large animals and their handlers along the way.

Dr. Gimenez — a Georgia-based PhD in animal physiology who has led similar courses from Colombia to Australia — will instruct some 100 registered veterinarians, animal control officers, emergency first responders, large animal owners and community members on the intricacies of rescuing large animals from barn fires, mud, ditches, roadside accidents, and other mishaps while reviewing how to minimize the potential danger to first responders.

Topics covered over the comprehensive, two-day, $200 course include “Introduction to Livestock Trailer Wrecks, Overturns & Response,” “Implementing Proper Emergency Field Humane Euthanasia for Large Animals,” and “Prevention & Mitigation of Fire Scenarios (barns, wild fire, trailer fires).” In other words, situations anyone responding to a 911 call (or those placing one) might encounter but be woefully ill-prepared to deal with.

The course will also touch on simple but essential things large animal owners can do to better prepare for emergencies, like making sure their properties are well marked with easily accessible laneways while offering hands-on instruction on freeing horses and wild creatures from the oddball places they can find themselves which, according to both Chute and Gimenez, happens more often than you might think.

“Whether you own animals or not, chances are you’ll come across a situation once in your life where you’ll be saying, ‘How did this happen? How did that deer get into the driver’s seat of a car?’” Chute tells Samaritanmag.

The TLAER has been offering courses stateside for nearly two decades, and both Chute and Gimenez agree it’s only a matter of time before the concept goes truly global, although inroads are being made. Indeed, Chute got the idea for bringing the course to Ontario after a near-disaster struck close to home. 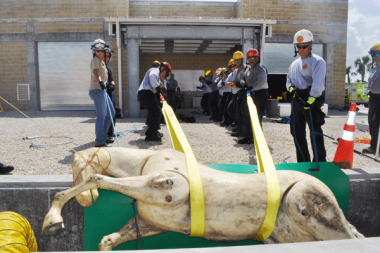 “Last year in particular was very dry and we had a lot of fires as a result. There was a grass fire just a few farms over from my own and it ended up being huge — about 200 acres — and there were something like 50 horses in the area,” Chute explains.

“Had we not managed to get it under control and evacuate the horses, they would have been in a very bad place. It occurred to me that we needed to start training first responders and animal owners themselves, so that they can manage situations before we arrive.”

She continues: “I also volunteer with another animal rescue organization called OERS, the Oceanographic Environmental Research Society, and their director of operations last year sent me to the Atlantic Veterinary College in P.E.I. where I took an operations-level, technical animal emergency rescue course with Dr. Gimenez. I was so incredibly impressed with the message she got across and the way she managed to get all these disparate people — everyone from SPCA to large animal vets to concerned citizens of the community — working together. I felt I really had to get her here to talk to our guys.”

Interestingly, Dr. Gimenez – who serves as president of TLAER, Inc., a business she purchased from her now-retired veterinary ex-husband, Dr. Tomas Gimenez, at the start of this year – says the idea for targeting first-responders came organically… from a first responder.

“One day, during a lecture my ex was giving back in 1994 or ‘95, a firefighter showed up, took us aside and said, ‘Listen, no offence to the vets but the people who get the 911 call are the firefighters. We’re the ones who have to deal with the overturned horse trailer on the side of the road or the burning barn.’ So we started working with firefighters and we got a terrific response.

“Since then,” Gimenez continues, “we’ve had huge disasters in the United States that have opened people’s eyes to the need for disaster preparedness planning, not just for firefighters but also for animal control people and law enforcement and so forth.”

Gimenez offers multiple courses over several days, “teaching people how to get animals out of all the ridiculous places they can get into either by their own devices or through the stupidity of human beings.”

She cites the UK and Europe as being far ahead of North America in terms of organized animal rescue missions. In 2006 for instance, she says the UK fire service performed 10,000 animal rescues; of those, 800 were large animal rescues. 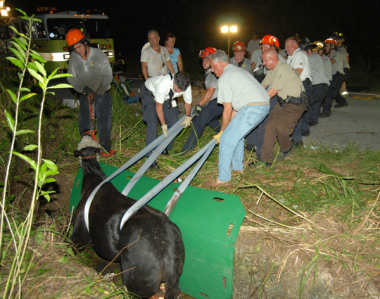 “I did a course recently in New Hampshire that was attended by horse owners and boarding facility owners; in other words, people who had already seen some of these nightmares. Usually the makeup of the audience is horse owners, cattle owners or ranch owners, barn managers. Anyone who has more than one horse realizes these kinds of things do happen. Preparedness is essential.

“I saw barns in Germany from 600 years ago that look the same as barns today. We haven’t improved a damn thing. It’s hard to butt up against tradition. But it has to be done and it needs to be based on fire science and veterinary science. We’re trying to do that.”

Adds Chute: “And it’s not just livestock and horses but wild animals too. As humans continue encroaching on nature we are coming into contact with deer and bears more and more, so this kind of knowledge is very useful. This is happening not just in rural communities but urban ones as well.

“The course is also for people. For example, if you have a motor vehicle accident involving a person trailering a horse, you’re dealing with those potentially trapped in the car and a possibly injured horse trying to free itself. This can be very dangerous for first responders dealing with an animal that is scared and in pain and maybe lashing out.

“This course really opens your eyes to how much trouble an animal can get into.”