Cody Simpson New Ambassador For The Who's Teen Cancer America 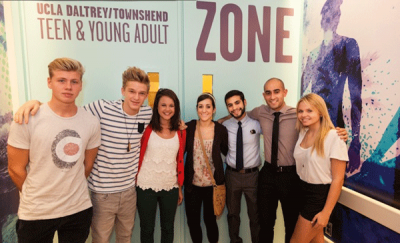 Cody Simpson, the 16-year-old Australian pop singer-songwriter who is represented by Justin Bieber’s manager, is the new ambassador for The Who’s Teen Cancer America, which raises funds to help set up special teen-friendly wards for young people fighting cancer.

“Roger Daltrey from The Who just asked me to be involved,” Simpson tells Samaritanmag. “It’s very established in the UK and they’re just starting to bring it to the United States. He wanted to have a younger face to be involved.

“Anything I can do to help. Everything I do I like to keep it amongst kids my age just because I feel like I can connect to them a little better and make a difference because I do have some kind of a voice amongst young people.”

Simpson has more than 5 million Twitter followers and Facebook likes; 650,000 subscribers on his YouTube channel and 138 million views on his videos. His new album, Surfers Paradise, will be out July 16.

Daltrey and bandmate Pete Townshend have worked with Teenage Cancer Trust in the U.K. for more than 20 years and spearheaded its expansion into America.  The organization is dedicated to improving the lives of teenagers and young adults with cancer.

“When I first heard about it, I was honoured obviously and got to meet [Roger] a couple of weeks ago,” says Simpson. “I went to see the first ward in the U.S. down — it’s in Santa Monica in LA [at UCLA Medical Center] — and met some of the patients. It’s an amazing thing they’re doing. They’re bringing all of the teens into one ward and creating this cool area to make it a little more comfortable for everyone.”

According to the organization’s web site, Teen Cancer America partners with hospitals to create youth-oriented centers for those receiving treatment. These units provide peer support and interaction while receiving treatment at in-patient and out-patient clinics.

“It’s a very good idea,” says Simpson. “You don’t want to be next to some old woman; it makes it very impersonal. You feel much more comfortable among people your age and be able to have friends that you can relate to and share stories.”

When he met these fellow teens and heard some of their stories he walked away with a multitude of feelings.  “It’s scary. It’s touching. It’s very inspiring, but it’s also quite daunting to know what they’re going through,” he says.

“Being a teenager is tough enough as it is. To have this extra weight on your shoulders, it must be… I can’t even imagine…it was just amazing for me to see smiles on people’s faces when I went in.

“Anything I can do to bring happiness for a little while whether it’s going in and playing some songs or whatnot, through music, I like to do that.”

When Simpson first came to America in 2010 — long before his full-length studio debut, Paradise, came out, which was in 2012 — he aligned himself with Detroit-based anti-bullying charity Defeat The Label.  Giving back is just something instilled in him from an early age and particularly as his star gets brighter.

“My parents are really great people, they’ve always taught me to spread positive messages and use my powers for good, you know what I mean, instead of evil,” he laughs.

“A lot of artists do get very caught up in themselves and forget about the difference they have the possibility to make, so from the start of my career I’ve always been involved in different things and do my best to give back because I do work very hard and I have been given quite a lot, so anything I can do to give a little.”

For his new role with Teenage Cancer Trust, Simpson says he will be “visiting wards that pop up around the U.S. and hopefully doing some benefits and whatnot. And actually on my tour — I’m on tour all summer — there’s an option to put a dollar for every ticket [buy] towards the charity.”

Simpson’s current North America tour ends July 20 in Boston and then he begins opening for Bieber on July 23 in Ottawa through to August 5. Only his solo dates have the donation option.