Liz Marshall Documents Animal Suffering In Our Ghosts In The Machine 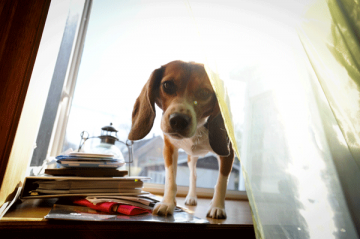 Liz Marshall knows the topic of animal rights is a tough subject. She knows most people would rather look away. That’s why she calls them “the ghosts”: animals used by humans for food, fur, research, and entertainment. The BC-born, Toronto-based filmmaker has just released a new documentary called The Ghosts in Our Machine, which tackles the controversial issue and aims to raise awareness to animal suffering around the world.

Marshall has been committed to making socially conscious film and TV for more than 10 years, from specials about sweatshop labour for music channel MuchMusic to in-the-field work with charity organizations like War Child Canada and the Stephen Lewis Foundation, which supports HIV-AIDS projects in Africa. Her first feature documentary, Water on the Table, was about the protection of freshwater resources. The Ghosts in Our Machine is her first project to focus on animals. It follows award-winning photographer Jo-Anne McArther as she wrangles access into dairy farms and fur factories and other secretive places and tries to put an individual face to the animals held captive there for a book called We Animals. Like Jo-Anne’s photos, the film is both difficult to watch and highly captivating. The images speak for themselves, no preaching required.

The Ghosts in the Machine, which was partially crowdfunded through Indiegogo, premiered at this year’s Hot Docs festival and just opened at Toronto’s Carlton theatre (until June 13), with more theatrical screenings planned throughout the year. It screens at Winnipeg Film Group July 3-7 and 11-12, and Vancouver's VanCity Theatre Aug. 2-3, 16-17.  At the film’s premiere, a lengthy question and answer session with the filmmaker and photographer proved that the doc sparks many questions about what do to help.

The film’s comprehensive website is filled with resources and tips for going “ghost-free,” and Marshall, who has been vegan since she started the project three years ago, hopes her efforts will open up discussion about seeing animals in a new way. She spoke to Samaritanmag about what she has learned.

How did you become interested in working in social justice issues?

Mostly through my mother, who is a really committed citizen of the world. I grew up in that environment, but my interest became quite clear during my time with War Child Canada. I’ve always been drawn to people that believe in change and are hopeful and I see myself as part of that movement. So I gradually gravitated towards wanting to make films about goodness in the world.

In the director statement for The Ghosts in Our Machine, you say that this project impacted you more deeply than your past work. How?

What I meant by that, that it tweaked my moral compass differently, is because I had never focused on the animal question in the past. I was focused on human rights and the environment. The Ghosts are the billions of animals that we use within all these industries. My eyes were opened in a different way. I guess I had been wearing blinders and wasn’t fully conscious of the impact that we have, as consumers, on all these species or animals that are trapped in the machinery of our modern world. 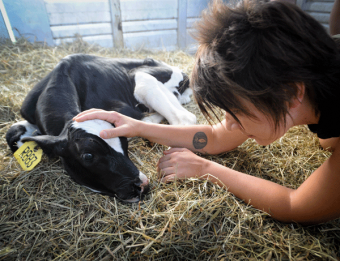 There are some great scenes in the film at a sanctuary, where we get to see happy animals. Why was it important to you to show not just the dark side?

The place is called Farm Sanctuary, and Jo-Anne’s best friend is the director there. It’s like a human-animal society, with a sense of equality. The animals are safe; they won’t be slaughtered or used for human needs in any way. In the film, we need that reprieve; we need to have those scenes were we can rest and reflect and also have some levity. The greatest challenge in making this film was finding a way to tell the story so people would want to watch. It wasn’t made for a niche audience; we’re not here to preach to the converted; it’s made for a broad demographic. Part of doing that was to create some scenes that have happiness, levity and joy, with a heartwarming quality to them, and other scenes that are challenging and difficult, but important.

You’re vegan. Is this film promoting a vegan lifestyle?

It’s not a “go vegan” project. We’re not advocating for the whole world to go vegan. It’s a consciousness-raising project, to open the door, possibly for the first time, to this subject matter. We’re not an activist group. We are connected with lots of amazing groups who are doing that work and people can plug into those organizations. People are thanking us. And they say, “Now what do I do?”

What is the “Five-day Ghost Free Journey”?

That’s something we initiated as a monthly event on our Facebook page while we were making the movie. It’s for people that want to try not eating or wearing animals for five days, and researching the ingredients that are in your house, for animal testing. We’ve created this blog and we have two coaches. It’s supported by Lush Cosmetics, through their Charity Pot grant programme. In fact, recently the Lush Vancouver staff, 30 people, took the journey. What people do beyond the five days is up to them. We’re not judging people who decide not to be vegan, but the response has been amazing and everyone has told us they’ve more or less maintained the lifestyle.

For those people who won’t be adopting vegan or even vegetarian diet on a regular basis, what are the ways that they can help?

It begins with examining our behavior. If in the summer we usually take our kids to the zoo, maybe we can think about other ways to teach our kids about animals in the wild. Maybe start considering what life is like for the animals, not just for us.  A sanctuary is designed with the animal in mind. A zoo is designed with a human consumer in mind. If we can understand that, that’s one way that we can make a difference for the animals.

What is your ultimate goal for this project?

We want it to do well, to get this issue on the radar. We want people to care. I know it’s a challenging issue. I know it’s hard to watch, the reality that humans put these animals in. Ultimately, I think just like Jo-Anne says at the end of the movie, that she truly believes that we are all compassionate and that if we are given the opportunity to care, we will. I believe that too.