Few of us need encouragement to drink more coffee but it’s nice to know that, on one day at least, our collective java obsession can actually bring about real change for good.

This year, some 16,000 Canadian and American youth aged eight to 18 will have the opportunity to attend one of three camp programs offered across six THCF camps in Ontario, Nova Scotia, Alberta, Quebec and Kentucky. They’ll join the estimated 180,000 kids served since the first camp was established in Parry Sound, Ontario in 1975.

Still, it’s the intangibles beyond traditional camp activities like kayaking and archery that makes the Camp Day campaign truly unique.

As Dave Newnham, vice president and executive director of Tim Horton Children’s Foundation explains to Samaritanmag, Camp Day isn’t just about giving poor kids a holiday they might not otherwise have. The experience builds the kind of confidence, camaraderie and life skills that pay huge dividends as the campers move forward through the rest of their lives.

“It’s easy to look at something like our camp program as a vacation for kids who can’t afford a vacation,” he says from the Foundation’s headquarters in St. George, Ontario. “Certainly that’s an element of it but it’s really so much more than that.

“We are using the camp experience to pack in a lot of developmental opportunities we know kids are missing by virtue of their economic circumstances, things like sports lessons and clubs and teams that many other kids take for granted. This helps to grow healthy adults.”

As Newnham explains, campers apply for the Summer Camp Program or Year Round Group Program and are selected in part using Statistics Canada’s Low Income Cut-offs or LICOs index.

“As kids apply, they are asked to disclose their families’ income level. We don’t ask them to prove it, but it’s something we look at as part of our approval process. And there are coordinators like school principals or local youth organizations that sign the applications and indicate they believe the information is true. 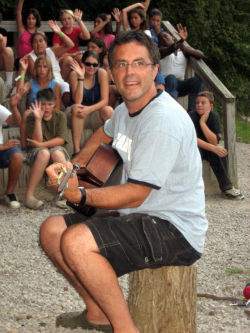 “Our mission is to help serve economically disadvantaged kids. Individual restaurant owners don’t actually pick the kids themselves; more often than not, they partner with a local school to execute the program. So the applications go to the schools, then home to the parents, then back to the school, to the restaurant and then back to the Foundation, which makes it a local community endeavour coast to coast.”

At age 13, camp kids are invited to join the Foundation’s Youth Leadership Program, a five-level program “which focuses on the development of lifelong leadership skills, teamwork and independence through 10-day sessions over five successive summers,” according to company literature.

Graduates of that program are then eligible to apply for the Tim Horton Children’s Foundation Carolee House Bursary Program which offers a $3,000 bursary for every year students are in full-time study at a college or university.

Some $4 million in bursaries have been given to graduates of the Youth Leadership Program since 2002. (The program is named in tribute to the late wife of Tim Hortons’ president and CEO Paul D. House, who Newnham says was instrumental in getting the program off the ground).

“The money is helpful,” Newnham adds of the bursaries, “but it’s really about the inspiration, encouraging kids to consider post-secondary education as an option. With many of our kids, they’re the first in their family to have ever gone to college or university.”

According to the Foundation, more than 65 percent of its revenue is generated by Camp Day activities and Tim Hortons coin boxes found in-store. The balance is netted through various year-round, local-level fundraisers such as golf tournaments, plus private and corporate donations.

The goal this year is to meet or surpass the $11 million raised on Camp Day in 2012. In addition to buying a Timmy’s coffee on June 5, customers can also help by texting CAMP to 45678 to donate $5, by donating online at sendakidtocamp.com or by making in-store donations to “Rent-a-Tent” for a $1 or “Rent-a-Cabin” for $5.

Asked whether any graduate campers have gone on to achieve celebrity, Newnham laughs.

“I am often asked that but I think our success story is much more every day,” he says, noting that Camp Day began in earnest 1991 as an offshoot of an initiative launched by Tim Hortons owners in Atlantic Canada keen to raise funds for what became the Foundation’s second camp in Tatamagouche, Nova Scotia.

“Many kids who have been through our programs are now social workers, school teachers, consultants, civil servants. They’re holding down great careers and living successful lives. What they’re not doing is living on social assistance or having children before they can support them. They have a plan and a positive goal for their lives. That’s where we measure success.

“One day we’ll have that star story to tell and that will be lovely. But that’s not actually the goal. It’s all about helping to build great contributing members of society.

“Our programs are designed so that kids will surprise themselves by what they can achieve. That sense of positivity – that they can do anything – reinforces their confidence. Research tells us about positive youth development, that caring about oneself, caring about the world in general, being motivated and having a sense of the responsibility is what makes the difference.”