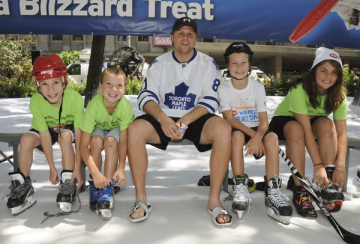 “These donations,” according to a release issued by DQ Canada, “have gone to support research and training, purchase life-saving equipment, and ensure excellence in care, all in support of our mission to save and improve the lives of as many children as possible.”

Pretty impressive for a company most people stop to think about only in summertime. But kids — and their endless desire for the sundaes, cakes, burgers and onion rings — are Dairy Queen’s stock-in-trade, and it’s clear speaking with marketing VP Denise Hutton that the company has them and their families firmly in mind.

“Giving back to — and being part of — the community is extremely important to us and is one of our key values as a brand and an organization,” Huttons tells Samaritanmag on the subject of the organization founded by singer Marie Osmond along with family and friends back in 1983. Dairy Queen had been on board as a national sponsor since 1984.

According to the Children’s Miracle Network website — which claims to have raised a total of $4.7 billion since its inception across various promotions with multiple corporate partners —  its mission is two-fold: to “help as many children as possible by raising funds for children’s hospitals,” and to “keep funds in the community in which they were raised to help local children.”

It also claims to assist some 17 million kids each year, treating children suffering from cancer, birth defects, accidents and muscular and cardiovascular diseases.

Last year, the company also launched Lindsey's Cakes for Miracles, two one-week fundraising drives happening in the lead-up to Mother’s Day in May and Father’s Day in June with one dollar from every DQ cake sold donated to Children's Miracle Network.

The campaign, named for Lindsey Lourenco — who died of cancer last March at age 18 and whose dad Tony Lourenco is a Vancouver DQ franchise operator — raised $150,000. “That’s a good example of how small our Dairy Queen family is,” Hutton offers. “Lindsey started fighting for her life at age 13, she was an amazing ambassador. It’s amazing how many lives she touched.”

The 2013 Lindsey's Cakes for Miracles Mother’s Day campaign is currently underway until May 12.

And DQ Canada’s fundraising work continues apace. On May 14, the company is organizing a circus-themed event for Toronto’s Yonge-Dundas Square starting at 11:30 am which also raises money for Children’s Miracle Network by offering 10,000 mini Kit Kat Blizzard Treats in exchange for donations.

“It’s always been extremely important for us to give back,” Hutton says “and being a brand that’s all about families and kids, what better way than to work with the 13 children’s hospitals across the country as part of Children’s Miracle Network?”