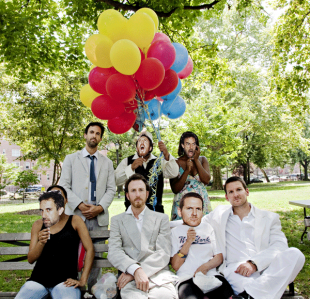 Leave it to a musician to make environmental activism look cool.

When not fronting American alt-rockers Guster, 39-year-old singer-songwriter and guitarist Adam Gardner serves as co-director of non-profit organization Reverb, which, for a price, helps touring bands reduce their carbon footprint through various on-the-road and at-the-venue sustainability measures while promoting environmentalism to their fans.

Reverb’s efforts have struck a chord with heaps of marquee names: Dave Matthews Band, Alanis Morissette, Jack Johnson, Drake and John Mayer are among those who’ve tapped it to green their gigs. Reverb’s site lists some pretty impressive impact-to-date stats, too: 141 tours greened, 107,564 tons of CO2 reduced, 13.5 million fans exposed to the message.

You can bet that when Guster hits sheds this summer, for 30 shows starting June 17, alongside long-time pals Barenaked Ladies and the Ben Folds Five, the concert-goers roaming through the on-site ‘Eco-Village’  — set up at each show to engage fans and provide a forum for other non-profits to reach out — will see green.

On the phone from hometown Portland Maine, Gardner tells Samaritanmag why musicians are uniquely qualified to lead the environmental movement by example, and why Reverb continues to benefit from its Canadian connections.

Had you been environmentally active before launching Reverb?

Yes. At the time, I’d come home to New York and my environmentalist girlfriend — now wife — and I would be living one way, then I’d go out on the road and it would be another story. We were driving this big tour bus and there was plastic everywhere, everything was disposable and it basically went against everything that I stood for. Lauren helped to open my eyes and get me looking through that environmental lens. And I talked with other bands that shared this concern. And that’s how Reverb came to be —  as a way of helping bands, my own and others, to be more environmental. There are a lot of good intentions in the music realm but nobody really knew what to do. So we helped to fill the void.

Was Reverb based on any existing model?

Funny enough, my sister Laurie Gardner went to a Bonnie Raitt concert in 2002 and brought home a pamphlet that described almost exactly the model we had been talking about. She had called that tour the Green Highway (which is a non-profit education and outreach arm at the veteran blues singer/songwriter’s concerts). That served as a template, and as we were applying for our non-profit status we became part of Bonnie Raitt’s foundation, and helped to expand on what she did on Green Highway. So that helped to get Reverb off the ground. Once it was up and running, the very first call I made was to Barenaked Ladies. The first tour Reverb did was in 2004 with BNL and Alanis Morissette. 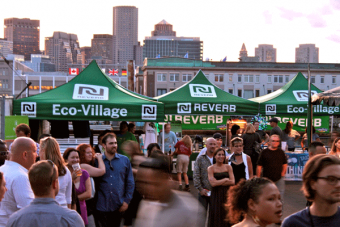 How do bands manage the cost of using Reverb, especially since I understand that someone from your organization actually goes on the road with bands to help implement and execute these strategies?

It obviously depends on the size and scale of the tour, but we do customize it for each artist (he would not give a price range so contact Reverb to inquire). Some bands like Dave Matthews Band or Jack Johnson just see it as a way of doing business, so it becomes part of their production costs. Some artists want this to happen but need funding so in that scenario we try to work with corporate partners that share our ethos. For example, a recent tour by the band Fun., we brought in Ben & Jerry’s which was great: at the same time they were supporting our cause, they were giving away ice cream so it was a win-win for everybody. We’ve also worked with Brita, the water filter company, to create these roadworthy rehydration stations so people can bring reusable water bottles to help reduce plastic waste. Again, these programs help fund greening efforts but also help fund the artists we work with.

So how does it typically work?

Generally we have someone on the road with a band that is folded into the band’s crew as the ‘green person’ and they’re taking care of everything on-site. So we have volunteers that we’ve coordinated from our office coming out, and we have our own road cases that are completely integrated into the tour. So volunteers will be out there setting up, organizing backstage, making sure water stations are set up, organizing front-of-house and our non-profit ‘Eco-Village’ where fans can go. The goal here is to make it fun. Rule number one is not to be a buzzkill. These issues may be very sobering but we’re trying to make it fun and interesting for people. But at the same time, we want to make sure our efforts have substance and will make a difference.

How receptive have concert promoters and venues been to Reverb’s efforts?

Good although it’s taken some time. Recycling was a big one. In the early years, a lot of venues didn’t offer recycling. That’s so basic it should be a given and it wasn’t. On one of the first Barenaked Ladies tours we did, we actually had our own recycling collection and we had fans take recycling home. So Live Nation — after having so many green tours coming through their venues — finally took note. And we were able to consult with them for a couple of years on things they could do and offers some incentives. For example, preferred parking to people who come to a venue in a car carrying four or more people. Or water programs — their concession people, the ones selling water, have been very cool about it because they understand our programs are educational and this makes it more pleasant experience for the fans. They seem to get that we are adding to the concert experience, and so the venues and promoters have been very helpful.

Have you seen evidence that artists carry these greening efforts into their day-to-day lives? And are they supporting the cause in other ways?

To the first question – yes. Usually most artists already have this [sustainability] notion in mind in their private lives and the question is how they can put those sae practices in place on tour. To the second question, also yes — lots of artists are spreading the word using Twitter, Facebook and so on. We also have something called the Green Music Group which is a coalition of artists Reverb has worked with that care about these issues and are leading the way in the music industry. (Members include Sheryl Crow, the Roots, Maroon 5, Willie Nelson). And that allows us to speak in one large voice. 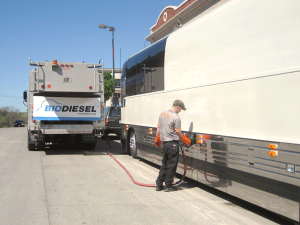 Oh boy, lots. Jason Mraz, John Mayer, Tegan and Sara, Drake. And we’re moving into hip-hop too which we’re really excited about through something called the Campus Consciousness Tour which we created in 2006 that’s targeted towards college campuses and students. We take advantage of the fact that we, Reverb, are there all day so we organize daytime activities and integrate with the campus environmental groups that are already doing great work at each venue. That’s been really rewarding especially since hip-hop is so popular on campuses.

Has anyone turned you down?

Ha! The good news is, we’ve been kept so busy receiving calls that we haven’t really had time to think about that. Sometimes we will work successfully with an artist but then their focus may shift. An example is John Mayer who we worked with for a number of years but who is very involved with supporting veterans. In those situations we try to figure out ways we can connect different issues to the environment.

So when this rock and roll thing is done, do you see yourself going into politics or activism in a full-time way?

Reverb is already full-time! I don’t know about politics. I always thought the music thing would end… it was always, “Well in another two years this will be over,” but after 20 years of saying that I realize I shouldn’t be looking at this in two-year chunks anymore (laughs). Music keeps going and Reverb is a great way to add meaning to what I am doing musically.  And I think a lot of artists share that sentiment.