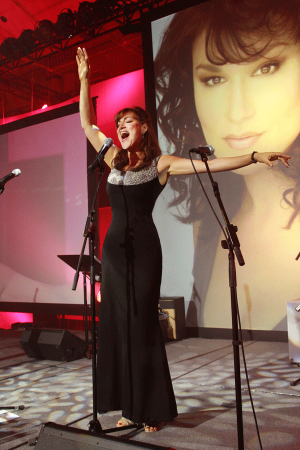 Toronto singer-songwriter Amy Sky revealed publicly in 2006 that she had dealt with depression and postpartum depression since 1990 and started hearing from others going through the same thing. As a respected musician in the public eye, she was in the perfect position to help others.

Since then, she has become an outspoken champion of mental health awareness and the recipient of 2007’s Courage To Come Back Award from The Centre for Addiction and Mental Health (CAMH) and a 2009 Hero Inspiration Award from the Mood Disorders Association of Ontario (MDAO).

“I think both awards are really acknowledging my willingness to speak publically,” Sky tells Samaritanmag.

While she continues to work with both organizations in addition to others — she has lent her name to both Bell’s Let’s Talk campaign and last year supported the Not Myself Today campaign by Partners For Mental Health — she has launched her own newsletter and website aliveandawake.ca, named after her brand new album.

The free monthly Alive & Awake newsletter (sign up only requires your email) provides tips and tools for greater self-care and mental wellbeing.  Mental health specialists from Toronto’s Sunnybrook Health Sciences Centre will be contributing, joining the wellness bloggers Sky already has writing for her.

Sky had been informally volunteering her time as needed and requested, to attend events, and do interviews with the media on behalf of the Mood Disorders Association of Ontario and CAMH — she was a big part of CAMH’s Transforming Lives campaign several years ago which included her image on giant posters that were installed in bus shelters, urging people to call CAMH if they needed help.

“I found out at least one person in my network — a friend of a friend who was suicidal, who had post partum depression, saw the poster and instead of killing herself, she called CAMH,” Sky recounts.

“I was told their call volume went up 30 percent or something and they honoured me with an award. More importantly, I’d been blessed with a burden, I call it. I thought if you save a life, I gotta do that; I have to just make that a part of my message because I’ve been there myself.”

Sky is not a doctor, of course, and when asked how one knows one is depressed, as opposed to just having a bad time over a breakup or loss of job, death of a loved one or financial woes, and she is very clear:

“That’s a great question and sometimes it’s a fine line.  But really it’s not just about the symptoms, although the symptoms are the first clue. You can go to the Mood Disorders of Ontario web site and we have an online text called CheckUpFromTheNeckUp.ca and you can take that online quiz. That will help familiarize yourself with a lot of the symptoms,” Sky says.

“But the real clue — and you need a doctor to diagnose — is how long the symptoms have gone for. What they generally say is if the symptoms have lasted unremittingly for over two weeks then you may be having an episode and you may want to have yourself evaluated by a professional.

“When I had post-partum depression, I was living in California and there was a hotline that I called during one of my very very dark days,” she continues. “I don’t know what would’ve happened if I didn’t have someone to talk to. The power of conversation, knowing there are people out here who have been through it, who have survived; that there are resources; that’s the most important thing.” 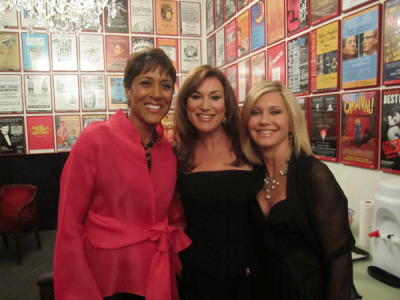 At one of the fundraising events Sky was speaking at for Sunnybrook, she connected with Dr. Levitt, scientist, evaluative clinical sciences, in the Brain Sciences Program at Sunnybrook Research Institute, as well as a professor in the department of psychiatry at the University of Toronto.

According to his profile page on the hospital’s web site, Dr. Levitt’s research is “focused on several related areas within the field of mood disorders,” including seasonal depression, the long-term treatment of adolescents with depression, thyroid illness, and the examination of new and novel treatments for treatment-resistant depression.

“The biggest problem is people who have mood disorders don’t know they have it, don’t recognize it; don’t get diagnosed; don’t get help or know they have it and don’t get help or know they have it and get help, but think that means taking a pill. And while taking a pill can be life-saving for people, not everyone who has a mood disorder needs to be on medication. What is really important is that people who are affected take a proactive approach and understand what else can be done in terms of the self-care to stay well, to recover or to lessen or prevent further episodes.”

Self-care, Sky explains, is the idea that “our body mind heart and spirit are what we call a terrain.”  Her web site is divided into those four sections: Mind, Body, Heart, and Spirit, featuring various bloggers for each category, plus a Five Minute Fitness section which houses videos.

“Mental illness, much like cancer, doesn’t attack one area. Like cancer shows up in your body, mental illness theoretically shows up in your brain, but you have to check in on all quadrants,” says Sky.  “So very simply, the most important ones — your body — proper nutrition, proper supplements — and every person needs to consult with their own naturopath or nutritionist to find out what's right for their particular body type or condition.

“Like a lot of people have gluten sensitivity; if you have gluten sensitivity and you’re eating gluten, you’re going to really exaggerate your symptoms. It’s a really simple thing a lot of people can do — the food elimination diet. Take gluten away and see if you feel better. Nutrition supplements are a no-brainer for the body; exercise and sleep, that’s also extremely important.

“In the mind — cognitive behavioral therapy, learning those skills. I’m shocked by how many people I know see a doctor for symptoms of depression; they get put on an anti-depressants and then are not giving any skills – the equivalent of working with a trainer for your body; it’s working with a trainer to detox your mind from negative self-talk, to learn how your thoughts create your moods — that should be 101.

“Just like you take the written test for your drivers license, they shouldn’t let you on anti-depressants unless you've completed a course on cognitive behavioral therapy. That’s my particular opinion. But I think most experts would agree, it’s vitally important.”

Subscribers to the Alive & Awake newsletter will receive free links to download music that Sky has composed for the videos.  Her Alive & Awake album  — which actually was titled before she launched her web site and newsletter — features 17 songs designed to create healing by virtue of their themes, noting, as she learned from cognitive behavioral therapists, that thoughts create your moods.

“The intention was to lift people up,” says Sky. “There are songs about the journey of recovery from acknowledging that you have something that needs to be changed, from that moment when you’re ready to make the changes — in fact there’s song called ‘Ready To Be Changed’ — and all the aspects of the journey.

“I didn’t literally deal with all of them [on the album], but in the way that songs are metaphors for emotions, I wanted to have an album of songs that would really support someone that is in need of some healing.

“Always on my albums I just write about what I’m going through and life, kids, marriage, death and because I write about all that stuff, people share their stories with me,” she adds.  “So it’s been this informal dialogue with my fans — email, Facebook, at concerts — and I just decided to make a forum where we can share.

“The newsletter is fairly new, but I’m hoping over time it will develop and on the web site people can comment and they can chat and interface with each other. You know the worst thing, the worst thing, about having a mood disorder is feeling like you’re alone. So what the newsletter is is just a way of reducing stigma, while keeping the conversation alive.”