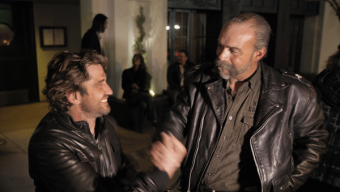 Sam Childers, the former Outlaw biker and drug dealer turned pastor who inspired the 2011 film Machine Gun Preacher, starring Gerard Butler, will be the guest speaker at a fundraiser to benefit his charity Angels of East Africa on May 10, in Woodbridge, Ont., just outside Toronto. The venue is the Paramount Conference and Event Centre.

Angels of East Africa operates the Children’s Village Orphanage in Nimule, South Sudan, which cares for about 200 kids at a time; Childers and his soldiers and staff have rescued more than 800 children, according to information on their web site.

Tickets are $120 by calling 905-761-3383 or emailing franca@thesoptagroup.com. The Sopta Group is also seeking donated items for the silent auction along with sponsors for the evening.

American-born Childers has dedicated the past 15 years of his life to saving orphaned children from starvation, disease, enslavement and from being forced to take up arms for Joseph Kony’s Lord’s Resistance Army (LRA) in North Uganda and South Sudan.

“We are excited and honoured that Mr. Childers will be speaking at the event to talk about his organization’s past and present efforts,” John Sopta, president and CEO of The Sopta Group, said in a press statement.