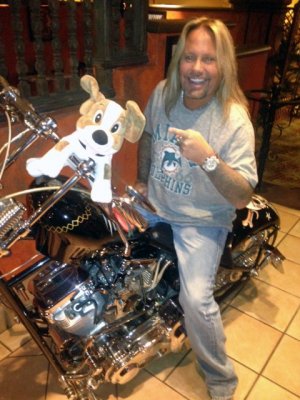 Motley Crue is gearing up for their biggest Canadian tour in their 33 year history, but before they do singer Vince Neil is literally gearing up for something else that is close to his heart, the Smokin’ Tires Skylar Neil Memorial Car Show on April 6.

The massive fundraising event to showcase or admire high-end custom and collectable cars — and also featuring a celebrity auction, food trucks, BBQ pit, live bands, awards/trophies, and appearance by Neil — is in honour of his four-year-old daughter who passed away from Wilm’s Tumor, a form of kidney cancer that typically strikes children.

“I'm doing a big car show in Southern California [at La Laguna Resort in Lake Elsinore], continuing on trying to raise money for children's hospitals along with supporting the Owie BowWowie foundation,” the Las Vegas-based Neil tells Samaritanmag. “They have this stuffed toy [Owie] that they bring to kids who are going chemo and other illnesses.

“One day while in LA, I saw them on TV.  It really reminded me of a little dog my daughter use to have.  But this guy is wearing all of these bandages. Kids can carry it and hold onto it while they are going through stuff.  It’s pretty cool.  It’s like they have one another.  There are some kids in foster care and some even without a family to visit them in the hospital. It sucks.”

The 7-inch stuffed dogs can be purchased online for $12 and a percentage of the proceeds from the sale is donated to Owie BowWowie, which provides and delivers Owie Comfort Companion Gift Packs for free to hospitalized children throughout the U.S. They’ve even delivered some to Canadian children. For every 12 that are sold, another hospitalized child is given a gift pack. The dog, which is 12-inches (larger than the ones sold online to the public), comes in a red carry bag complete with his own Band-Aids, mini blanket and inspirational book.

“A few years ago Vince happened to see my news segment on KABC about a stuffed dog named Owie that is given to hospitalized children, and Owie reminded him of a dog that Skylar once had,” Owie BowWowie And Friends founder Gina Woods tells Samaritanmag. “He loved the fact that children would receive a special gift made specifically for them, and that is when he donated Owie BowWowie Gift Packs to Children's Hospital Los Angeles.

“When the car show came up, Vince's faithful friend, Kelly [Stang], called me to share that Vince was doing a car show and that he wanted to include Owie. I was excited — not at that fact that he wanted to include us, but that he remembered us. Within the world in which I serve, non-profits need to remembered because once we are forgotten, that is when we become but a memory.

“We look forward to the car show next week and hope that everyone comes out to support the children,” she adds.

Neil lost his young daughter in 1995. Skylar Lynnae Neil had initially been diagnosed with appendicitis after being rushed to the hospital in intense pain that April.  During an operation, doctors discovered a baseball size mass —Wilm’s Tumor, also known as nephroblastoma — that had ruptured and spread throughout her tiny body. She underwent several surgeries and chemotherapy but passed away Aug. 15, 1995.

Neil and his then wife Sharise Ruddell set up the Skylar Neil Memorial Fund, which to date has raised millions through unique charity events, and then distributes those funds to other child-related charities to support new technology in cancer treatments or aid in children’s recovery.