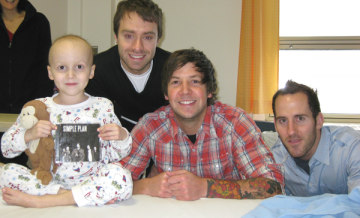 At what age will you think about your legacy? For drummer Chuck Comeau of multi-platinum-selling pop-punkers Simple Plan, it started at 26. That’s how old he was when he and his bandmates — frontman Pierre Bouvier, guitarists Jeff Stinco and Sébastien Lefebvre, and bassist David Desrosiers — founded the Simple Plan Foundation in 2005. The Montreal-based organization, which raises funds through the band’s concerts ($1 for every ticket sold) and other music and merchandise initiatives, announced last fall it has donated more than $1 million to charities dedicated to helping young people facing illness and other problems.

For their efforts, Simple Plan has received several high-profile awards, including the Queens Diamond Jubilee for service to community and country, and the Allan Waters Humanitarian Award at the 2012 Juno Awards. On March 21, the band will be presented with the Allan Slaight Humanitarian Spirit Award at the Canadian Music & Broadcast Industry Awards at Toronto’s Kool Haus, as part of Canadian Music Week 2013. Comeau spoke to Samaritanmag about the challenges and rewards of establishing, managing and growing a charitable foundation.

Most people don’t start thinking about their legacy until later in life. What inspired you to do this in your 20s?

It was actually my dad. He was talking to me and to the rest of the band and saying it was amazing that we were doing well, but at some point, when we’re older, we’ll want to look back and think about the legacy we left. Doing big tours and selling lots of records is awesome and it will always be with you, but what can you do that will have a deeper impact and define who you were as people? We had supported a lot of charities before, with more standard things like benefit concerts, but we had never done anything that organized.

How did the Foundation get started? How did you take from an idea to a functioning operation?

It was very humble at first. We started to raise money and to define what we wanted to accomplish — to help young people dealing with various teenage problems, facing illness — cancer is close to our hearts—and to promote the use of music to help them find a passion in life. Every year since then it’s been growing, more than we ever expected and the reaction has been amazingly positive. Sometimes people see it as bigger than what it is, but it’s all volunteer. We’ve never really hired any proper staff. My parents are very involved and we have a great board of directors. There’s no office with tons of people working. It’s just our team and us, and we sit down and discuss things and make decisions then go away and make it happen. We’ve built relationships over the years with organizations and have a network of people who believe in what we do that have been a huge help. 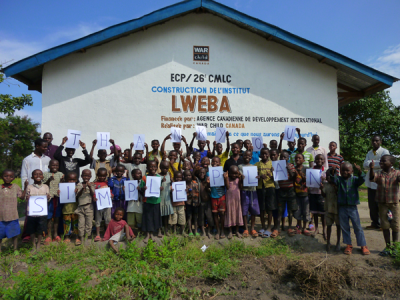 With five members of the band, how do you decide which charities to support?

That’s the biggest challenge. We get a staggering amount of requests from different organizations. The sad thing is that all of them are doing good work. One of the things we do, every time there is money donated to an organization, is sit down to discuss where the money is doing to go. We don’t just hand it over. We try to customize the donation to a project that will help support our goals. Control is the wrong word, but we have an influence.

How do you vet the requests? Do you have a process to investigate the organizations?

Obviously, we talk to them. We call up, ask questions and get them to submit an outline of what they want to do. For example, the Sainte-Justine hospital in Montreal, the biggest child hospital in Quebec, they’re getting millions of dollars and the size of our donation, it could easily get lost. So we found a doctor that is a big supporter of the foundation and we went to her and asked, “What do you need?” And we found that for kids who are in the hospital for a long time and don’t see their friends or family, they can go out of their minds. So we said let’s try to build a room that’s an oasis, where they can play music and watch movies and have computers and iPads to Skype — instead of being a drop in the ocean of research. That’s just one of many examples.

What would you say has been the Foundation’s biggest project over the years, in terms of financial contribution made?

We don’t usually give specific numbers so I don’t know what the biggest one was. When we started out it was our plan to have a lot of different contributions to different groups, like 20 different organizations in a year, something like $10,000 each. Now we find if we make fewer contributions but bigger amounts, we have a bigger impact. It’s part of growing as a foundation and learning how to help people better.

What does receiving recognition such as the Allan Slaight Humanitarian Spirit Award mean to you?

It means getting the word out to more people. One of the ideas was to inspire other young people to get into the habit of helping people. It doesn’t have to be millions or thousands of dollars; it can be simple. Kids will send us emails like, “Hey, it’s my birthday and instead of asking for gifts I’m making a donation to your foundation.” They’re 12 or 14 years old and that’s on their mind. It’s pretty amazing. Lots of kids will organize bowling tournaments or a show at their school. One girl raises $3,000 every year. That’s when it feels more real. It is a lot of work, and it’s not something every band has to do, but when you commit to it, it becomes very gratifying. It’s something we’re going to keep doing for the rest of our career and the rest of our lives.