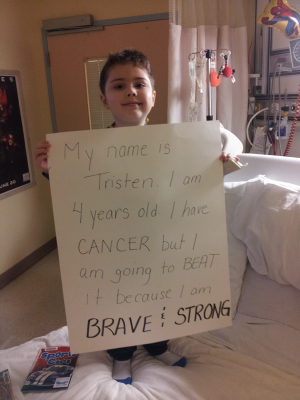 Just days before Christmas 2012, Tristen was diagnosed acute lymphoblastic leukemia (ALL) or cancer of the white blood cells. Parents Reno Silva and Pearl Hutchens-Silva had initially taken him to a walk-in clinic after he was complaining of a stomach ache.

He was quickly transferred to Sick Kids Hospital in Toronto where a bone marrow extraction and spinal tap confirmed the worst and, Reno Silva tells Samaritanmag, “Everything went into slow motion.”

Since then, the Silvas have been scrambling to manage the myriad logistical problems — not to mention the sudden overhead — such a diagnosis inevitable brings. In particular, modifications to the family’s Mississauga, Ont. home are keenly needed.

“We are trying to avoid further complications,” Reno says. “He’s already had a staph infection and we almost lost him. His immune system is compromised and he’s very sensitive to dust, allergens. Plus my wife has been off work since December and although insurance is helping it never covers the full amount.

“And there are so many incidentals that really add up — food and parking and things like that. Steroids he was on made him hungry on the hour. The chemotherapy he was on was covered to a maximum, but we still had to pay extra, something like $200.”

Tristen — who turns five two days after the event and was highly active in sports prior to his diagnosis — is coping amazingly well. “He knows what he has and that there are limitations to what he can do. But he never complains about it,” Reno adds, explaining that Tristen “is our only child. We actually went though in vitro fertilization twice to have him, so he was very much wanted.”

Silva continues: “He’s endured quite a bit of pain when they blasted him with chemotherapy during the initial phase. But he’s never said ‘I can’t deal with this.’ There’s something about Tristen that’s very special.

“Everyone seems to gravitate towards him. At school, all the kids want to play with him. Even the day he got diagnosed, all the nurses and ambulance people just seemed to be so struck by him. He has this ability to pull people in. He’s a happy child with an infectious smile.”

Asked whether the family has a specific dollar figure in mind as a goal for Brave & Strong, Reno says, “I actually tried to figure out a number myself, but it’s impossible to predict. It’s going to be a long process; the protocol for his treatment is three years.

“We talk to others and try to get a sense of things, but we are told constantly to expect hiccups. But every little bit helps. And I have to say the support we’ve been getting from people has been amazing. It’s overwhelming and it means more than anyone can know.”