Not worth Anything? Salvation Army Begs To Differ 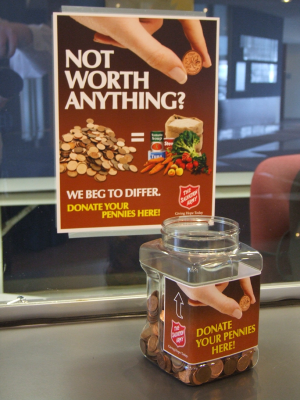 “Not worth anything? We beg to differ” says a new ad by The Salvation Army asking Canadians to donate their unwanted pennies to support the organizations social services programs. Since the one-cent piece was taken out of circulation last month in Canada, 120 participating thrift stores across the country have started a penny fundraising drive that will last for the next few months.

The pennies don’t need to be rolled or even in bulk. Just toss some in the jar when you’re walking by a Salvation Army location or start collecting and make a special trip.

So now that businesses have been rounding up or down your change from purchases, where can you get hold of these pennies?

“The penny drive might encourage some early spring cleaning,” offers Andrew Burditt, national director of marketing and communications for The Salvation Army in Canada. “Pennies have often been lost in the couch cushions, ash trays, washing machines and dryers for years. Piggy banks filled with coins and any other place one might toss a penny from your pocket could also be a good source to find these pennies.”

The fundraiser will benefit Salvation Army services that provide food, shelter and general assistance to Canada’s vulnerable and marginalized.

In order to locate a penny donation site go to www.SalvationArmy.ca.The Salvation Army has been around longer than the penny. The international organization started in Canada in 1882 and is now the largest non-governmental direct provider of social services in Canada, serving 1.8 million people each year. The penny came into circulation in 1908 and minted 35 billion pennies since.

The goal is to collect as many pennies as possible to support local corps across Canada.  To get word out about the penny drive and to keep it uppermost in Canadians’ minds — who might have some in the ashtrays or crevices of their cars when they are driving by a Salvation Army thriftshop — Grey Canada produced a 30-second radio advertisement about the value of a penny and how they add up to make a difference for a person in need. The Penny Drive is also promoted through social media and on local corps channels as well.

School kids across Canada have been collecting pennies since last fall for Free The Children and so far have turned 7 million pennies in bags of 2500 — $25 can provide clean water to a person for a year. Burditt thinks this is wonderful and that Salvation Army is in no way competing with kids

“We think it’s great to get children involved in the collection of charitable dollars and encourage philanthropic efforts at a young age,” Burditt tells Samaritanmag. “Anyone of any age can donate to the charity of their choice to help the less fortunate. That’s what’s important.

“Through The Salvation Army’s overall mission and primary focus, our donors know the Army will put their dollars to good use by providing assistance to those in need unequivocally and without discrimination.”

He says its their religious affiliation and devotion that is the difference.

“Our mission is what separates us — to share the love of Jesus Christ, meet human needs and be a transforming influence in the communities of our world. We believe in this deeply,” says Burditt. “The scope of our services means that if you need a helping hand, for virtually any reason, we will likely be able to assist you either directly or through a referral.

“Our unprecedented footprint nationwide allows us to invest in the future of marginalized and overlooked people in virtually every community in Canada.  The Salvation Army has nearly 500 units located in more than 400 Canadian communities.”