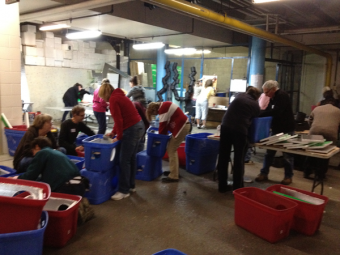 Those behind the Toronto Humane Society’s winter shelter-building workshops — which transform everyday materials such as Rubbermaid storage bins, Styrofoam insulation, some tape and straw into life-sustaining makeshift homes for street cats in winter — are about to build their 1,000th shelter.

An event slated for Saturday, March 23, 1 p.m., at the THS’s River Street HQ, celebrates the dedication of the many volunteers who have saved untold feral and homeless cats from certain death on Toronto’s wintery streets by making and distributing the shelters citywide.

Run as part of its Feral Cat Program — which in turn is part of a larger volunteer base including other members of the Toronto Feral Cat Trap/Neuter/Release Coalition — the Humane Society’s overwintering shelter program launched in 2010.

“We build these shelters primarily – almost exclusively – for what we call colony caretakers, people who feed a colony of feral cats in their neighbourhood,” Bill Howes, a Humane Society shelter-building volunteer, told Samaritanmag last winter. “And there are many such people spread right across the city. [Estimates put the Toronto homeless cat population at 100,000 or more].

“We hold the workshops in the winter months starting in November and running until the end of March or April,” Howes continues. “We take over a space in the basement at the Toronto Humane Society on a Saturday morning, and we’ll have anywhere from a dozen up to 20 or 30 volunteers come out to help build them.

“Many of the materials we use are donated; one of our volunteers [Kali Hewitt-Blackie] has been successful in soliciting materials from Canadian Tire, Home Depot and similar big box stores. Some materials we have to buy ourselves, but it’s usually through money we raise asking for a $25 donation to the Humane Society for each of the shelters we build. It’s not mandatory if someone can’t afford it, but we do ask.”

But while the advent of the 1,000th shelter is good news for homeless cats, the troubling problem of strays in the city remains.

“Cats are so seen as so disposable in our society,” offered Dr. Hanna Booth, veterinarian and founder of Toronto Street Cats — a volunteer group within the Toronto Humane Society, where she is also a board director. “People need to value cats the way they do dogs.”