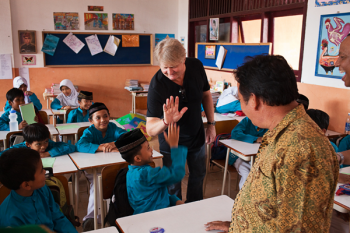 Rock singer-songwriter Tom Cochrane, best known for his hit “Life Is A Highway” and a highly respected 40-year veteran of the Canadian music industry, has long be involved with philanthropic causes, particularly for World Vision Canada. This April, the 59-year-old will be honoured with the 2013 Allan Waters Humanitarian Award at the Juno Gala Dinner & Awards April 20 in Regina, SK.

It will be the second time he has been given such an award. In 2005, he was the recipient of the Humanitarian Award at the Canadian Music Industry Awards during Canadian Music Week (CMW).

“I am very honoured to receive the Allan Waters Humanitarian Award and would like to thank CARAS and the JUNO Awards," Cochrane said in a statement, issued by the Canadian Academy of Recording Arts & Sciences (CARAS) which presents the annual Juno Awards honouring Canadian music.

"With that said, it is an odd thing to receive an award for trying to do the right things when those things have presented themselves in the light of the tremendous blessings I have received in my life and career.  Every day my fans, family and friends get up and many of them do the right things for other people and the good of our world and country without getting acknowledged.  So I share this with you.  Love to all."

In addition to World Vision, with which he has visited Africa eight times and Asia twice, Cochrane has supported a wide variety of causes, from 1985’s “Tears Are Not Enough” for African poverty relief to Parkinson's disease research for which he donated proceeds form his 2002’s single, “Just Like Ali,” to helping spearhead the Canada For Asia concert that raised money for tsunami-relief efforts.

Over his heralded career, Cochrane has released 13 albums and won seven Juno Awards.  He is a member of both the Canadian Music Hall of Fame and Canada's Walk of Fame, and an Officer in the Order of Canada.

"We are proud to be recognizing Tom Cochrane's commitment to making the world a better place - from his global commitment through World Vision to his philanthropic efforts here in North America," said Melanie Berry, president/CEO of CARAS/The JUNO Awards and MusiCounts, in a statement.  "Artists like Tom not only inspire us through their music, but also by challenging us to do more to help our neighbours, our communities and our fellow citizens both at home and abroad.  We salute him for all of his exceptional work."

The 2013 Allan Waters Humanitarian Award is sponsored by telecommunications company Bell Media, whose president Kevin Crull said of Cochrane in the press release: “Canadian talent are world-class when it comes to supporting humanitarian causes.  Tom has selflessly devoted his time and energy to making the world a better place and has set an example for all of us – we applaud you Tom."