Higher Education for African Girls The Focus of New Charity 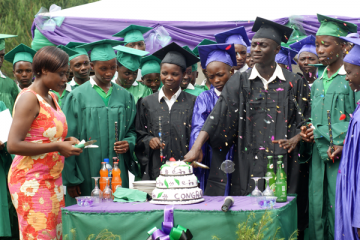 Most would agree the problems facing Africa are many and complex. They are also interdependent which means solving one crisis invariably impacts another, hopefully in a positive way. The trick is figuring out where to begin.

For Toronto’s Sara Dunkley, education in Africa — especially higher education for girls where costs are prohibitive but long-range benefits for the community can be profound — was the most obvious choice for her charitable efforts.

“In early 2011, I was doing some soul-searching,”Dunkley tells Samaritanmag. “I have always been passionate about children – I have two aged five and three with another on the way – and I have always been so grateful that as a parent in Canada, my children have access to many wonderful things.

“As long as they work hard, children here can accomplish anything. And it occurred to me that children in more countries need that same opportunity.”

And so, with that as her maxim and “empowering children to greatness” as her tagline, Dunkley — a business MBA and entrepreneur who operates a full-service billboard business, Stellar Outside — spent the last year ramping up the Beautiful World Canada Foundation, the education charity for which she serves as founder and chair. These days, she spends about 80 percent of her time on the Foundation.

Along with various partners on the ground in Uganda, South Africa and Sierra Leone, BWC provides scholarships to students  — 90 percent of them female, 75 percent attending high school and 25 percent attending university — unable to continue without financial assistance.

The emphasis on girls aims to correct a cultural imbalance favoring males where resources are scarce. As the BWC site notes, “If families have enough to pay for just one child, it is usually a boy who gets chosen to continue schooling.  The girl-child is required to perform most household chores and care for relatives and younger siblings. Commonly, her only alternative is work as a servant, prostitute or enter an early marriage.”

Dunkley admits that when she was cooking up Beautiful World Canada, she looked to existing charities for ideas. Even though many had education programs as key criteria, the focus tended to be on primary schools and not beyond. “And high schools in Africa aren’t free,” she adds. 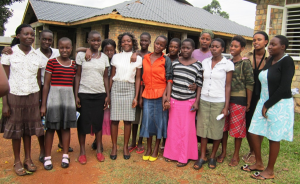 “There is a huge statistical gap between African boys and girls when it comes to education. And only six percent of all African students go on to university. Those are the worst stats in the world, so education was an obvious place to start.”

Having identified a niche where funding was acutely needed, Dunkley drilled down deeper, targeting AIDS orphans, refugees and those enduring abject poverty, ergo her focus on Uganda, South African and Sierra Leone.

“In Uganda, you have grandmothers caring for multiple children whose parents have died of AIDS. They are an unbelievable force, but they are working in fields or factories earning low wages and high school fees would be double their annual earnings so there’s no way they can afford it.

“Many of our students in South Africa are refugees who have escaped brutal circumstances in countries like Rwanda and Sudan where there are tremendous amounts of violence. They’re starting over again and many of them need psychological support before they can even begin school.

“And in Sierra Leone, we have students living in very poor communities where typically the rate of joining gangs is very high. So in one case we have a music program where we are teaching the students marimba and other things to get them off the street.

“We currently have about 120 students in those three countries. We work with local organizations on the ground that do everything from enrolling the kids to making sure their school fees are paid to meeting with them on a regular basis to purchase things they need like soap or shoes.”

But the commitment required of the students doesn’t end with a degree or diploma. “To continue receiving support, Beautiful World students must attend and succeed in their studies, and participate in community activities that help others,” the website explains.

“In addition, Beautiful World asks that all beneficiaries make a promise that, once they achieve their own goals they will support another needy student, just like themselves,” the site adds.

As for funding, Dunkley says that so far most has come from her family’s own Dunkley Charitable Foundation, a private foundation established in 2006 that typically donates to children’s organizations and military charities. Private donors have also been generous.

“People are very engaged in what we’re doing,” Dunkley says, adding that she hopes to actually visit Uganda, South Africa and Sierra Leone one day. “Many of our private donors have children in university. They want others to have that same experience.”

Additionally, the inaugural Beautiful World Canada fundraising dinner slated for the Liberty Grand this Thursday boasts TD Securities as lead sponsor.  The featured speaker is CNN 2012 hero M Twesigye Jackson Kaguri, author and founder of NYAKA AIDS Orphan Project and musical entertainment for the evening legendary South African jazz singer Lorraine Klassen. Tickets are $250 (a tax receipt will be issued). And with some 465 tickets and counting, the event is slightly oversold. “But we can always make room for more,” laughs Dunkley.

“The only way to really break the cycle of poverty for these children is to have them go to school,” Dunkley says. “Yes, there are many things in Africa that qualify as immediate needs but long-term, education is the solution.

“I believe in the famous Chinese proverb that if you teach a man to fish he can feed himself for a lifetime. As a Canadian woman, I realize how much I have gained from my education. And I want more children to have that, especially in this area of the world.”