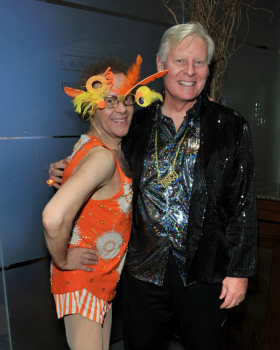 The March 3 event at Woodbridge, Ont.’s Paramount Event Centre (a short drive north of Toronto) is in support of The Princess Margaret Cancer Foundation (PMCF).

To simply attend the Boogie Nights dinner and concert — dress code “groovy” — tickets are $250.  To actually participate in this once-in-a-lifetime blast from the past with inimitable fitness guru Simmons, one has to get active — and we don't mean at the gym, unless you can hit up people there: individuals must raise a minimum of $500 to take part in both Disco Days and Boogie Nights; students must raise $300. There’s also a sign-up fee and age requirement (12 years and up). You can also join an existing team. Check the registration page here.

“This is just a superb, fun and funky way to beat the winter chill! I love disco,” PMCF president/CEO Paul Alofs raves to Samaritanmag. “I am one of the world's worst disco dancers, but that doesn't mean I don't try to imitate John Travolta. I used to go to several discos in the suburbs of Detroit in the 1970s when I was growing up in Windsor [Ont.].

“I have a spectacular $10 used sequined tuxedo jacket ready for Disco Days. I love the disco era, many of the artists like the Pointer Sisters, Donna Summers, Kool and the Gang.  The evolution of Motown was disco, and living in Windsor and partying in Detroit was part of my passion for this amazing disco event march 3 — although my least favourite song of all time is ‘Disco Duck.'” (See video below for footage from 2012)

The daytime event is called Disco Days, which is a three-hour dance-a-thon at which participants are challenged to dance 10,000 steps. Simmons and choreographer Marc Kimelman teach the popular dance moves so that you can be a pro by the nighttime concert by The Pointer Sisters, best known for “I’m So Excited,” “He’s So Shy” and “Jump (For My Love).”

In the afternoon, there is also a beauty bar on the premise for those who want hair and makeup touch-ups, plus a silent auction and a beverage bar. Lunch is followed by the first dance session, then a break mid-afternoon, the second dance session, another break and the final dance session. Cocktails are at 5 p.m., dinner at 6 p.m. and The Pointer Sisters at 7 p.m.

For qualifying Canadian University Students, VIA Rail will provide a free roundtrip tickets to Union Station for the event for students who sign up for Dancing Days & Boogie Nights.

In Canada, 40 percent of women and 45 percent of men will face a cancer diagnosis, according to PMCF. One of the unique elements of the Dance to Conquer Cancer fundraiser is that participants can choose to which area of cancer research they would like to allocate the funds they raise.