Toupee For A Day: A Hairpiece-Raising Idea 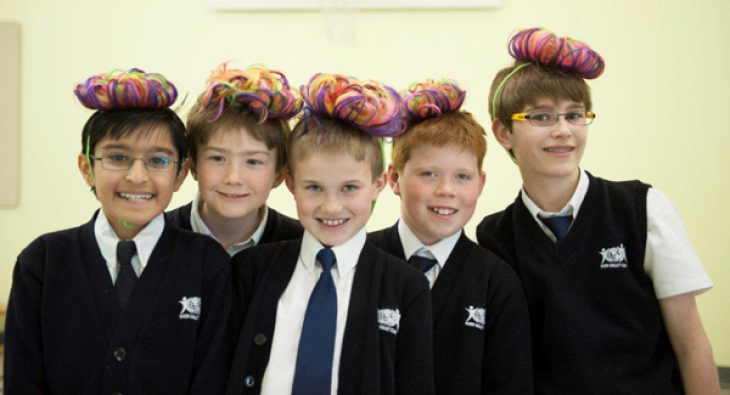 A little over two years ago, Calgary-based throat cancer survivor Heather Dougall was sitting on her couch watching TV when she came up with what she says “was the silliest idea she ever had.” And the silliness has spread to Niagara, Ont. too to offices, schools and homes. Hopefully the whole country can get silly too.

She was watching a “ridiculous” movie that featured an actor whose toupee was “blowing in the wind.”

Did it ever: In 2012, the initial implementation of Dougall’s Toupee For A Day involved 1200 people and raised over $105,000 for her employer, Wellspring Calgary, money that was earmarked for the many programs the non-profit organization provides for cancer survivors, their caregivers and their immediate families.

The premise is a simple one: raise $50 and you can earn yourself a multi-coloured toupee, which you wear on the first Wednesday of March (this year’s date falls on March 6.)

If you want to gather your co-workers or schoolmates, you can form a team of 10 people and raise a minimum of $300 to earn your group a toupee.

Dougall, who works as event specialist at Wellspring Calgary, says she was looking for something lighthearted to raise funds and tie to the charity’s name. 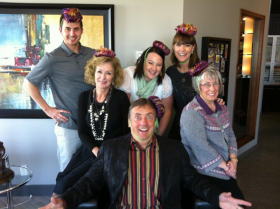 “There really is nothing about cancer that is fun,” she admits. “Cancer is very focused on hair. It’s always about taking your hair off, so people are shaving their heads. So I thought, well, let’s put our hair back on.  It’s the opposite.

“I also wanted to think of something easy that’s not time-consuming, doesn’t require anybody to grow or shave anything and something that’s inclusive that everyone can do.”

Dougall has been through it herself: two-and-a-half years ago, she was diagnosed with throat cancer.

“That’s how I got involved with Wellspring,” she explains. “I realized with the type of cancer I had, there’s not a lot of support, and Wellspring was the only place where as a woman with throat cancer, I could get support.

“So that’s why the toupee is multicoloured — because Wellspring is about every cancer, and all those colours represent every ribbon of all the cancers.” 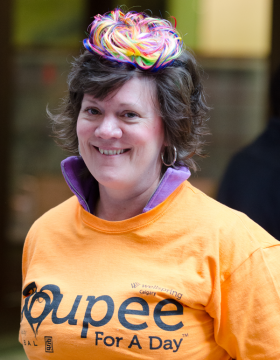 were some unexpected side effects.

“That was surprising to me, because no one ever talked about how you feel after — and the fear and isolation you go through.

“I still deal with it on a daily basis, the fear of how not getting it again, and there really is no answer to that. I don’t know why I got it. I had no risk factors — I never smoked. I’m female, which is unusual for throat cancer. So it’s just one of those things.

“But I have an excellent support system, but a lot of people don’t.  Many go through this by themselves, so this is where Wellspring is amazing.”

“We have back-to-work programs because many of our members can’t go back to the same jobs that they did, so we teach them about getting another job and writing a résumé.

“We have programs like ‘Brain Fog,’ because when you have chemotherapy or head-and-neck radiation, your brain is chemically imbalanced and doesn’t function properly for a period of time.”

Exercise programs involving T’ai chi and yoga, specifically designed around treatment that cancer patients are receiving, are also offered, as are “expressive art programs from journaling to painting,” horticultural therapy and peer support.

Wellspring’s support programs are also extended to caregivers and immediate families and friends. 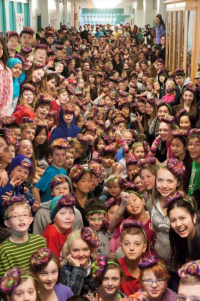 Dougall says Wellspring programs are free of charge “because when you’re on a cancer journey, it’s expensive, and generally you’re not working, so it’s really hard to have your own money.”

And this is where Toupee For A Day comes in: with community and major sponsor support, Dougall’s initiative is not only raising money for Wellspring Calgary, but she’s hoping the other 10 branches across Canada — all independently run and funded — will follow suit and adopt the program.

“We fell in love with the idea,” admits Phil Gourlay, events and fundraising coordinator at Wellspring Niagara.

“It’s a very easy event to put on and people can determine their own participation and what they do that day. All they have to do is put the toupee on their head and decide what their day is, get a $50 minimum in pledges or $300 for a team.

“Our goal is to raise $30,000 if we can. We’re hopeful we can get a lot of corporate teams to participate. It’s a fundraiser, but it’s also an awareness campaign for Wellspring. We’ve been here for 11 years, but it’s always good to try and get out to new people.”

Heather Dougall, whose 2013 Toupee For A Day campaign has already raised $23,000, says she’s stunned at the success of an idea borne out of sitting on a couch watching TV.

“When you’ve seen 1200 people in the city wear your idea, then watch it branch out to other cities, it’s pretty amazing,” she admits.