The Dare To Wear Love Challenge Is Now On 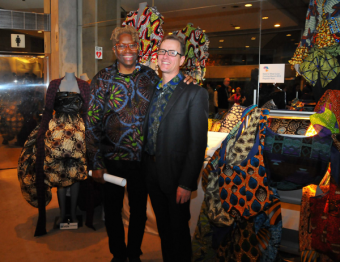 Bespoke fashion designers and philanthropists Jim Searle and Chris Tyrell of Hoax Couture are turning Valentine’s Day into Canada Day — and then extending the patriotism another three weeks until March 7, as part of their Dare To Wear Love challenge.

Leading up to their fourth annual Dare To Wear Love Gala March 22 — a unique fashion show in Toronto that has raised more than $100,000 to date for grassroots AIDS combatants The Stephen Lewis Foundation — Searle and Tyrell are encouraging Canadians to wear clothing and accessories by others Canadian designers.  Anything goes: Roots to Joe Fresh; Playdead Cult to Peach Beserk; Izzy Camilleri to Lida Baday; Stanfield underwear to a Hudson’s Bay blanket — and of course Hoax Couture. Even students at fashion schools and your own handy work on an old concert tee qualify.

It’s really the thought that counts because the objective is to raise as much money as possible for this Foundation that works with grassroots organizations that are turning the tide of HIV/AIDS in Africa.

“One hundred percent of the money raised through the challenge will go directly to community-based organizations in the 15 countries that have been hardest hit by the AIDS pandemic in Africa,” Searle tells Samaritanmag.

The Stephen Lewis Foundation has funded over 700 initiatives over the past 10 years, according to stats on its web site.

“These grassroots groups are lifelines for their communities," it reads. "They provide education and counselling about HIV prevention, care and treatment; distribute food, medication and other necessities; reach into the homes of the sick and vulnerable through holistic home-based care; help children orphaned by AIDS and other vulnerable children gain access to education and cope with their grief; and support grandmothers, who are overwhelmingly the caregivers for their orphaned grandchildren."

“The [wear Canadian] challenge is something that anyone can do," says Searle, "and we really feel good about the fact that it supports Canadian designers and Canadian fashion business here, as well as raising much needed funds and awareness for the people suffering on the front lines of the AIDS pandemic in Africa. We hope that people have fun with it. I can’t wait to see the online photos.”

This is how the challenge works:

Starting today (Valentine’s Day), register on the web site and set up a personal or team challenge then ask, beg or bribe your friends, family and colleagues to donate on your page. Any amount can be given, but tax receipts will only be issued for donations of $20 or more.

For every $250 raised, you get one ballot entered into a grand prize draw. Three winners will be chosen and can pick between their very own spot on the runway or two VIP tickets to the Dare To Wear Love Gala.

A jury of fashion professionals will award a fourth prize to the person who embraces the “Canadian Cool” theme with the most style and enthusiasm. To be eligible, post photos of your Canadian cool style on the Dare To Wear Facebook page, or on instagram or twitter using #canadiancool. 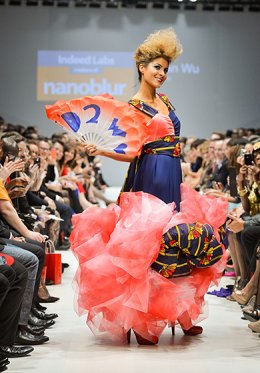 Each winner will be modelling a custom outfit created specifically for the show, which they get to keep. Winners can also assign their runway position to anyone of their choosing.

“Dare to Wear Love was started by Chris and myself when we learned of the incredible need on the ground in Africa, and the unbelievable devastation that the disease has wrought in communities across the continent,” Searle explains. “The fact that the Foundation supports grandmothers and orphans was particularly moving for us, as Chris was orphaned at a young age and raised by his grandmother.”

The Stephen Lewis Foundation has an incredible way of working, Searle observes.

“They do not create their own projects, but only fund established community-based organizations with a proven track record in their communities.  These people, who live with the disease every day, know best what their needs are, and the foundation assists them in supporting those in need in the community.

“Right at this moment, it is within possibility to have an AIDS-free world, but international aid funding is being cut across the continent, putting vulnerable people at huge risk.  The work that the Stephen Lewis Foundation does is critical in keeping people alive and allowing them to cope with the results of the pandemic.”

Searle and Tyrell have traveled with The Stephen Lewis Foundation to Zambia, Capetown and Lesotho and visited about a dozen projects that the Foundation supports.

“It was an incredible trip, and we realized both how bad the situation was, how difficult peoples lives are, and how much hope, resilience, ingenuity and love people have in spite of their situation,” says Searle. “Stephen Lewis is thought of as almost a miracle worker in these communities, as he is credited with bringing the anti-retroviral drugs to the continent.

“Many people are alive because of his work, and they know it.  It’s very moving. The Foundation is helping to further the work that he did as special envoy to Africa for the United Nations. The integrity of their approach, their respect for their clients dignity and knowledge of what needs to be done — it is really humbling to be working to help them do their work.”

The Dare To Wear Love Gala, which caps Toronto Fashion Week March 22, showcases the innovative designs of 25 Canadian fashion designers invited to participate. Each is given six yards of African fabric from which to produce a one-of-a-kind ensemble.  The resulting creations are modelled at the gala by professional models to various public figures, including musicians and media personalities, as well as winners of the Dare to Wear Love Challenge.

“When we started, we had the mandate to both fight the AIDS pandemic, and to support and promote Canadian fashion, and the incredible talent, generosity and resourcefulness of the design community here in Canada,” says Searle. “We really hope that a conversation gets started about both Canadian fashion and the problems faced in Africa.”