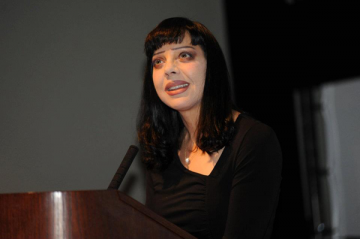 Bif Naked is primarily known as a rock singer, but that’s not her only talent. She’s also a songwriter, actress, cartoonist, radio host, live show presenter, poet and painter. And boy can she talk. That’s a talent — talking and not boring the pants off people. She is earnest, intense, funny, intelligent, self-deprecating, self-aware, intuitive, and empathetic — and many of these traits can come out in one conversation.

But when the now 41-year-old was diagnosed with breast cancer in early 2008 — and whooped its deadly ass in two years — she also became known as Cancer Survivor.

It’s one of those titles that will be with her for the rest of her life, like award-winner, although of course it’s an award for which a person never wants to be in the running.  Bif — whose given name is Beth Torbert — wears the award proudly. She really does.

And while her motivational speeches for National Speakers Bureau include a choice of presentations — Life Lessons from the Road; Bif Naked's Guide to the Universe and Rock Your Cancer — she tells Samaritanmag that “Generally, they all seem to be about cancer and how it has affected or changed my life or my job  — music — or both.”

“I often get hired to speak about something completely different, such as ‘body image’ or ‘women's empowerment’ events and the subjects always include cancer and music in my talks,” says Bif who was treated at the BC Cancer Agency’s Vancouver Centre. “I love speaking about cancer more than anything — more than music. I believe it is meaningful to the audiences as well, whether it is a room full of oncologists and nurses, or a room full of patients and survivors and their families; I feel more impacted by them and my hope is that I have generated a mutual feeling.

“Healthcare and patient advocacy and wellness is just more fun for me to talk about than my own career — or, maybe it is also because my priorities and interests change as I get older.”

Beth Torbert's life is certainly book-worthy — and she is presently working on her memoir for Harper Collins Publishing. She was born in New Delhi, India, to boarding school teenagers and adopted by American missionaries from the United Methodist Church who had met while studying at the University of Minnesota. Her dad dropped out of medical school to devote his life to training dental therapists and got his Masters in public health. Her mother, who had her Masters in education, starting working in ashrams. From them, Bif says, she got her “bleeding heart” and passion for teaching — although it manifested in a different way, one that was decidedly more rockin’. 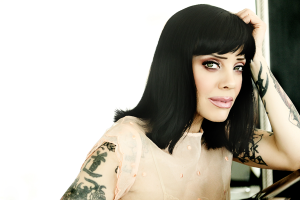 When Bif was a child, her parents relocated to Manitoba, Canada, and that is how Canada claimed this independent path-carver — from India by way of the U.S. — as our own. In grade 8, she got the nickname “Bif” when a kid mispronounced “Beth.” While at University of Winnipeg, she started performing in rock bands, namely Gorilla Gorilla and Chrome Dog, and adopted Bif Naked as her stage moniker. In the early ‘90s, she went solo and released her first, self-titled album, in 1995. Her newest is Bif Naked Forever: Acoustic Hits & Other Delights, which includes acoustic reworkings of her best-known songs, such as “Spaceman,” “Lucky,” “Moment of Weakness” and “Chotee,” along with three new songs; the first single is “So Happy I Could Die.”

Bif’s cancer diagnosis came at a time when she was super busy with work — back-to-back tours of North America and Europe with her band, and hosting the Bodog Fight TV series that even took her to Russia — and, most importantly, had just got married (they have since divorced) in November 2007.  She announced her diagnoses in January, 2008. She would’ve stood out in the doctor’s offices anyway with her multiple tattoos and striking features, but being in the public eye made her even less anonymous. Bif would have to go through this personal fight publicly.

“I was diagnosed with breast cancer around the same time I entered a very, hmmm, isolated personal relationship at the time,” Bif says. “So I discovered that I threw myself into clinical trials and wound up throwing myself into volunteering during my treatment because it was my only respite; it was my only happiness, basically. What I discovered was that I had such a passion for it and many people didn’t want the job and people felt uncomfortable talking to other patients, while I was sitting there in the chair beside them.

“It was just remarkable because I could not go through breast cancer as a woman; I still had my Bif Naked suit on. So I never had the experience or the autonomy or the anonymity of being a cancer patient; I was ‘Bif Naked With Cancer’ so due to that, I was basically identified in every waiting room as Bif Naked.

“Everyone wanted to take an iPhone picture with me. No matter what. You could be as sick as a dog and jaundiced and a failing kidney and they still want to take your picture in the waiting room, and that’s life,” she dismisses. “It’s nothing you could begrudge; it’s something that you could figure out how to put on a brave face — and that’s something learned from being on tour for 20 years and being sick on tour ‘Too bad, you still have to do the show [laughs]’ or ‘Too bad, you still are doing morning radio even though you’re still gonna die from the flu or whatever your issue is.’

“I just met so many patients that had to take the bus to get to chemo or had four little kids at home that they still had to go take care of even though they just had a bone marrow culture. I couldn’t believe how many people had to go through what I was going through under so many heinous situations compared to my life.  I live six minutes away from the cancer agency. I could afford to get a wig at The Bay. There were many women who couldn’t afford a wig.

“I just found that I could never complain, knowing that there were so many people that had so much more on their plate to deal with and it just really affected me and impacted my every deliberation when I was in treatment. It removed all fear for me; it removed all sense of self, and it was just a very wonderful passion that I found during treatment that I never really experienced it as a health crisis.”

Being in the public eye also forced her to take that position of strength. 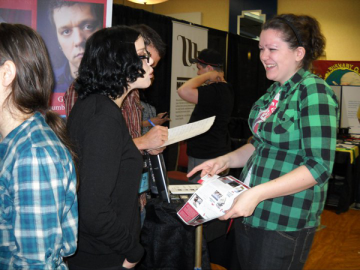 “I did not necessarily have a supportive group of intimates around me. Cancer is very polarizing socially. People either overcompensate and step up to the point of awkward or they scatter and they don’t come around you, but they probably don’t know what to say or it triggers fear in themselves or whatever it is. But it’s never personal; it’s just stuff I found.

“You know, we live in an era of Facebook and Twitter and over-sharing,” she muses, “people did not talk abut cancer; they didn’t want to talk about their feelings around cancer, either the patient or their families, mostly their spouses — and it made me realize how much shame there comes with a diagnosis.

“I can’t deal with my own shame. We all carry our shit around; I can’t deal with it; I will outrun it in my own life and I found, oh no no, I can’t stand one second of anyone feeling shame regarding their own cancer or their treatment or how they look or how anything, so being a real natural big mouth, a real natural class clown, it just kinda unfolded until I signed with National Speaker Bureau and was able to start doing keynote addresses and do talks at different cancer fundraisers. I’m so grateful that that came into my world and I credit having gotten sick.”

Bif means it. The singer-songwriter started working on an album, while undergoing chemo and radiation treatment (The Promise was released in May 2009) and also started her motivational speaker engagements.

“People think ‘Poor me’ because they do feel terrible and chemo makes you physiologically feel like death, but they carry so much hope with them, as patients. Certainly they’re fearful, but it’s amazing and it’s inspiring how positive people are, even in the face of remarkable physical challenges with cancer treatment.

“People do come back [to health]. I thought of things like Run For The Cure. I looked at these photos of women who were all ripped and tanned in their marathon outfits and running for the cure — and they were cancer patients and I was like, are you kidding me? I can’t believe this woman who was in this Run For The Cure was at one time jaundiced, sickly, bloated, bald like I am today. I couldn’t believe it. It was unbelievable to me and I thought, ‘Well, that is what the outcome is and it has to be that for everybody.’ A million woman can’t be wrong. It really gave me a lot of strength and motivation. I think motivation is the thing.”

“Ever since the tit cancer, people have been generous to want to hire me to speak at their cancer events and speak to patients and I just found a real passion for doing this. I wish I could do it full time as my job. I love it and I volunteer in Vancouver with peer-to-peer patient support groups and I really find I’ve found my calling in it.”