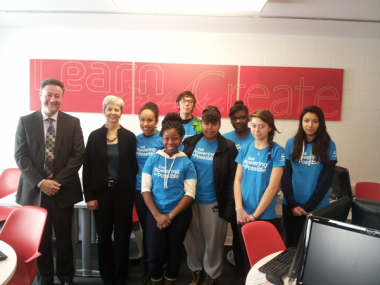 Dell Canada has donated its first mobile tech unit to St. Alban’s Boys and Girls Club in Toronto to make new technology accessible to clubs that don’t have permanent computer labs in place. The unit contains five mini-laptops, a printer/scanner, a modem with Wi-Fi capabilities, a USB/DVD hub, and a portable internet hub from Rogers Communications Inc.

Boys and Girls Clubs of Canada (BGCC) has been operating for more than 110 years and today provides quality after-school and out-of-school programs to more than 210,000 young people that support physical, educational and social development. Their 99 clubs are located in 500 community service locations nationwide in neighbourhoods where they are needed most, from large city centres to remote rural communities and First Nations reserves.

“Because our clubs have a number of different locations, we want to take the technology to where the young people are,” Pam Jolliffe, president/CEO of the Boys and Girls Clubs of Canada, tells Samaritanmag. “Clubs are always struggling to raise money to do everything they’d like to be able to do, so a mobile unit allows us to bring this state-of-the-art technology to more of our club locations.”

St. Alban’s — which formed in 1949 and moved into its present building in 1961 — provides a supportive environment for young people and their families via various community outreach programs. Its 19 satellite clubs serve the youth within three low-income areas — Jane and Finch, Weston-Mount Dennis, and Lawrence Heights. While the main location has a permanent computer lab in place, not all clubs are as fortunate either due to the lack of space for a stationary computer centre or a lack of funds.

“Technology has been a challenge for us,” Chris Foster, the executive director of St. Alban’s Boys and Girls Club, said during his speech before the presentation. “This [mobile unit] solves the challenge of having a physical lab. Something we can transport easily would make a lot more sense.”

To sweeten the deal further, Dell Canada also presented the Club with a gift of 10 tablets with detachable keyboards. This charitable undertaking is part of Dell’s global-scale Powering the Possible initiative that was brought to Canada last year. BGCC was the first Canadian organization that the techno-giant approached sharing the responsibility of providing opportunity for learning and change within low-income communities.

“We really want to make sure that children, irrespective of their personal situation, have access to technology so they can participate in any social media, in learning, in things that many of us take for granted — many of our children take for granted,” Paul Cooper, executive director, public and large institutions at Dell Canada, explains to Samaritanmag.  “We can provide technology and support of that technology so that these kids will have an equal chance to learn and thrive in society.”

The support is computer training Dell provides to 300 Club staff members who can then operate and maintain the donated equipment.

The importance of having up-to-date technological tools lies within their ability to draw young people towards bettering themselves, according to Foster who recalls the experience of building the Club’s very first computer lab in 1997.

“It was the first technology we had here and it was the beginning of everything for us,” said Foster, addressing his Dell Canada guests, the St. Alban’s staff, and the kids. “It was the first time we were able to get youth out of the gym and do something else.”

No one puts it better, however, than one of the very kids using the club’s facilities. Amanda Darby, a student at Western Tech and aspiring photographer, is a 17-year-old volunteer at St. Alban’s and recent Youth of the Year. To her, the importance of a portable computer lab is obvious. 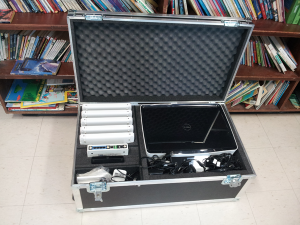 “It’s important to be able to move the technology around because there are some clubs that don’t have computers like we have,” she tells Samaritanmag. “With that mobile unit, we can move it around to different clubs and all the kids around Canada can experience that feeling of using a new computer and being able to actually do their work at the club.”

“It’s important for youth in the community to have access to technology because a lot of the time, when we don’t, it’s harder to learn and, for me especially, when I’m able to use new technology I learn easier and I am able to understand things more.”

“Technology must be up to date and up to speed with what is in the real world. If not, then we have a disadvantage,” Darby echoed in her thank you speech at the presentation.

The mobile tech lab will be transported to different locations using the club van or one of the managers’ vehicles.

“‘Powering the Possible’ is the umbrella: there are four components to the program – supporting youth, and specifically empowering them through technology; we have a second piece, pediatric cancer — so we are focused on leveraging technology to help the outcome of cases of children with cancer; the third is social entrepreneurship, so that one is targeted mostly at college/university, sometimes high school kids, who are interested in creating businesses, but within the social realm that we all operate in today; and then, the final, is disaster relief —  that, obviously, is somewhat more situational, but when disasters occur we provide direct giving, and resources and technology to help communities in need.”

Cooper says Boys and Girls Clubs of Canada’s outreach to lower-income communities in order to help young people achieve academic and personal success is one of the main reasons Dell chose to partner with this particular organization.

“The Boys and Girls Club is a great charity that we can support that does wonderful work,” he says. “It allows for our team members to get directly engaged, increasing that volunteerism and, equally, if they want to make contributions themselves, they can do so too. It was great and well-aligned with our philosophy.”