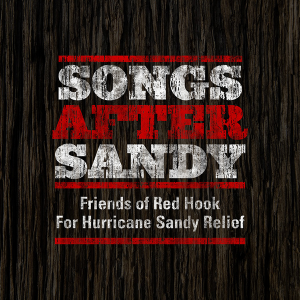 On Oct. 29, when Hurricane Sandy ripped through New York City, this isolated hook-shaped community on a peninsula by New York Harbor was devastated too. In the aftermath, many business owners returned to find their basements flooded and water destroying their main floors, walls, electrical, products, furniture — not to mention livelihood.

While help is on the way from bigger agencies, such as The Federal Emergency Management Agency (FEMA), the people of Red Hook decided to take charge and help each other.

Music publicist Elizabeth Freund of Beautiful Day Media & Management who spearheaded Songs After Sandy and lives in Red Hook tells Samaritanmag, “As the community was in the first week of the aftermath and the shock, we were all trying to figure out ways to get immediate assistance and I saw that my community was struggling.

“Primarily with the individuals, there seemed to be more readily accessible aid. I myself had my daughter’s bedroom and my bedroom and office flooded fully and I found the community come and encircle me and help me through it. I rent and my landlord took care of the infrastructure and there was just an amazing amount of generosity that poured my way and saw me through,” she continues, “but what I saw in terms of the community that I rely on in terms of the businesses — the coffee shops, the restaurants, the stores — things were much harder for them.

“There’s so much unseen damage done. It’s easy when you walk down the streets in the first few weeks to see the actual physical damage, but the economic damage is enormous.” (See the Restore Red Hook video below, featuring people from the neighbourhood talking about the damage they saw and suffered).

Despite the huge public outpouring for the victims of Sandy from mass scale funding efforts by large organizations — and the pledge of half-a-billion dollars from the U.S. government — the distribution of that money is often slow and hampered by paperwork and red tape. Smaller communities might not receive help as quickly as needed.

Red Hook is fairly isolated. It is situated right on the harbor and has no subway, just bus. A ferry operates due to a nearby IKEA. “It’s very disconnected which is one of its charms,” Freund explains. “All the buildings are low. Even the electricity is raised so it has almost quaint feeling for a city. And it draws a particular person. The community is a very tight-knit, filled with artists, filled with small entrepreneurs.  It’s also a very economically depressed area so we have a couple of [housing] projects. It’s an integrated, interesting off-the-beaten-track kind of place.”

Two days after the disaster struck, Freund reached out to her friends, clients and contacts in the music industry to donate songs to raise funds for Red Hook from digital sales. She was able to round up an impressive group of people willing to help make her charitable music project a reality, and they in turn reached out to their friends.

“Ringo and Eric Burdon are clients. I used to work with Bow Thayer who’s a friend. Joe Walsh is a friend,” Freund rattles off when asked how she landed such amazing names.  “Joseph Arthur lives nearby.  Brendan Benson worked with Eric Burdon; he’s a friend too. Other people just heard about the project and called in, like Matt Lenny and Toby Lightman. Jeff Lynne is in the circle of Ringo; Joan Osbourne is a Brooklynite; and Kenny Wayne Sheppard knows Ringo and Joe. So it was that kind of thing.”

The three-volume collection is for sale on PledgeMusic until the end of February, after which it will reside at Songsaftersandy.com. The cost for all three is $35, which includes such bonus material as a music video by Bob Weir and Jesse Malin and a song by McCartney. One volume sells for $15.

There have also been a steady stream of items for purchase, including a pair of Roger Hodgson concert tickets and meet ‘n’ greet and a used drum head signed by Ringo, both sold.  Still available are a signed Ben Folds Five limited-edition lithograph and a handwritten poem signed by Edgar Winter, among other items. More will be added.

Sponsored by Green Ground Zero, all proceeds from the sale of the albums and items, will go to Restore Red Hook, Red Hook Initiative, Occupy Sandy, — “specifically the ‘wedding register’ they maintain where they detail items needed in specific communities — and Green Ground Zero.” According to notes provided on the project, an advisory board, comprised of third party members, will ensure funds are disbursed responsibly.

“It’s certainly not a quick and easy way to bring in funds, but we’re getting there,” says Freund. “I’d love to see something in the vicinity of $50,000.”