Angel The Injured Kitten Now Wheeling Around On Mobility Cart 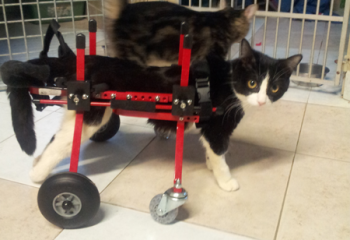 Endings don’t come much happier than the one currently being scripted for Angel the kitten, who was discovered abandoned last November at a downtown Toronto McDonald’s with a broken spine and broken ribs.

Because of her injuries — deemed consistent with abuse — the then-five-month-old Angel dragged her paralyzed hind legs behind her. She required constant care to expel her bladder.

The Ontario SPCA opened a case on Angel, but a spokesperson admitted last fall that the prospect of tracing Angel’s predicament back to an abuser was slim because the cat had been moved from the McDonald’s by a passerby, disturbing evidence that might have assisted an investigation.

Alison Cross, senior manager, marketing & communications for the provincial office of the OSPCA, confirms no leads on Angel have come in either through their office (1-888-668-7722) or Crime Stoppers (1-800-222-TIPS) “but if anyone does have information, they are still welcome to call,” she tells Samaritanmag.

Placed in the care of Burlington, Ont.-based Karen Beharrell, who operates Special Ones Cat Rescue, Angel’s sad story quickly went viral, outraging many to the point of action.

Today, the little black-and-white feline’s situation is much brighter. A customized mobility cart was donated to the cat, which allows Angel — whose inert rear body is hoisted onto the cart — to move more freely, propelling herself with her front legs.

And Beharrell confirms that much-needed donations poured in, allowing her to seek advanced medical treatment. “She’s doing great. She was a little bit nervous about the cart at first but it didn’t take her long to get going with it,” Beharrell tells Samaritanmag.

“I’d pet her a bit and she’d start walking and now she’s flying around in it. The other cats [in Beharrell’s care] don’t seem to mind, and my dogs seem to know there’s something different about her but they just go with the flow. Everybody has adjusted.” 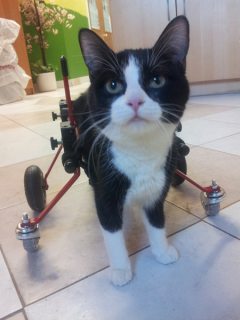 Washington state-based K9 Carts — which creates mobility devices for animals — customized a cart for Angel and delivered it for free. “We try and help as many rescue cases as we can,” offers K9 Carts owner Barbara Parkes.

“I was approached by a fellow who had heard about the story and sent us video and photos of the cat,” Parkes adds. Beharrell confirms it was not a friend of hers, but a stranger with a good heart named Darren Welgan who set the proverbial cart wheels in motion.

Parkes continues: “So through him we discovered that this kitten existed. And it was getting close to Christmas and we like to try and help at least one animal. So we made up a little cart for Angel and shipped it out.

“I understand she’s tearing around like crazy now! Very often animals — especially young animals — will rehabilitate if you can get them up and keep everything in alignment. It allows them to move around and build up muscle tone. And it’s very important to do that because an animal dragging itself around doesn’t have a chance.”

While the prognosis for a complete recovery for Angel is poor, Beharrell is optimistic the cat can improve somewhat.

“We had an appointment with a neurologist. Angel had an MRI done and the doctors feel she will never regain the use of her back legs. But I have been reading stories by other people who were told the same thing and their animals actually did regain use,” Beharrell says.

“So I am still going to book spinal surgery to straighten out her upper back which is currently in an ‘S’ shape and we’re hoping that with a little bit of therapy she might get something back. Even if the doctors are skeptical I still think it’s worth trying. That surgery will cost upward of $5,000; the MRI costs $2,100. But we received about $8,000 in donations, enough to cover both procedures.”

As for a forever home for Angel, Beharrell admits, “At this point I am thinking I’m going to keep her.

“The trouble with placing her is that she needs to have her bladder expelled several times a day and that will have to continue if she doesn’t get any feeling back. You couldn’t just leave her all day and go to work. I’m able to bring her to work with me [at Bekker’s Kennels in Oakville].

“She can run around in her cart here and play with the other animals. She comes to me when I call her. She’s gotten pretty fast and she can go in reverse and turn around if she gets caught on something with one of her wheels. She’s a smart little girl.”

Adds Parkes, who has been successfully placing mobility-challenged cats and dogs — and rabbits and chickens — in carts for over three decades: “If I could afford to give a cart to every animal that needs one, I would because it makes such a difference. They adapt so well and it greatly enhances their quality of life.

“It’s not the end to put them in a wheelchair. It’s a new beginning.”