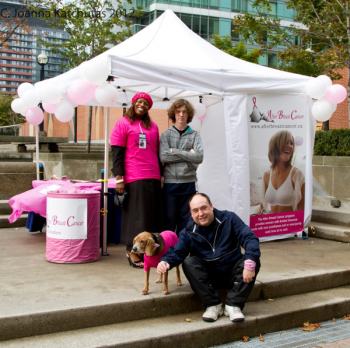 Much of the public discourse surrounding breast cancer focuses on the battle against it, but not the battle that comes after surviving it. Without the financial resources or access to private insurance plans, many women are left without the means to cover the purchase of post-mastectomy bras and prostheses. The need often gets shuffled to the bottom of the priority list when a woman is battling cancer. But post-surgery, bras and prostheses can mean the difference in helping survivors regain not only a sense of their womanhood but also a sense of normalcy.

Alicia Vianga is a certified bra fitter and owner of Premier Jour Fine Lingerie, a Toronto-based intimate apparel boutique. Last October, Vianga founded the charitable organization After Breast Cancer (ABC) to address the needs of breast cancer survivors who are unable to afford bras and prostheses. ABC’s aim is to provide these women with new or gently used bras, camisoles and/or prostheses free of charge.

Programs that support this need currently run in the U.S., England and Australia, but Vianga identified a major gap in the Canadian health care system. The support wasn’t there, and she found the situation unacceptable.

“For me, it was very difficult because I do a lot of mastectomy fittings in my boutique and I do see women come in who, even after eight years since having a mastectomy, still have socks in their bra because they can’t afford to buy a prosthesis,” Vianga tells Samaritanmag. “They don’t know where to get it or they’re not wearing the proper support. It breaks my heart and that’s the reason why I decided to do something about it.”

Vianga notes that when women don’t have the financial resources, post-mastectomy choices can become an either/or: either buy medication or buy support apparel. Out of necessity, women will choose to buy post-surgery medication. But bras and prostheses can be just as necessary for women to heal and regain a sense of wholeness.

“It’s hard to get back to your normal self [after a mastectomy],” she says. “Bras and prostheses can give women a normal sense of being again.”

Since its launch, ABC has reached out to hospitals and charities city-wide. The organization recently teamed with the Toronto chapter of cancer support community, Gilda’s Club, the namesake of Second City and Saturday Night Live comedian Gilda Radner who died of ovarian cancer in 1989, to conduct bra fittings and facilitate educational workshops on a monthly basis. It has also received support from major bra and intimate apparel suppliers, such as industry-leader Amoena, which donated 150 post-mastectomy bras, and American Breast Care. Three hundred bras were donated by Torontonians via ABC’s Bra Bin, located at the boutique. 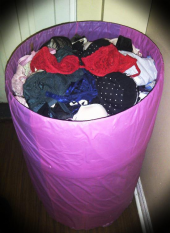 Although ABC is in its infancy, Vianga has already received positive reaction within the medical community, noting that some hospitals and organizations realized that post-mastectomy support was a missing tool in breast cancer care. Others were grateful that a program now exists for an aspect they were unaware they overlooked.

“We have a couple of breast cancer survivors on our board and one of the stories that one of the ladies tells us is that one day she went to oncology and asked: ‘Where can I get a bra?’ They couldn’t tell her. They said: ‘Just look through the Yellow Pages,’” Vianga reveals.

“Not every bra boutique is certified. They don’t carry mastectomy bras or prostheses; only specialty places do that. So for a lot of women it’s still very difficult for them to cope and find the resources and the support that they need.”

However, the reactions that mean the most to Vianga are the ones that come from the women who visit her boutique.

“I got a call from a client last week who said, ‘My husband has noticed there’s a difference in me,’ and now she feels comfortable going back to her work and not having to worry that one side of her chest looks different from the other side,” she says. “The reaction has been fantastic so far and I’m certain that it will remain that way.”