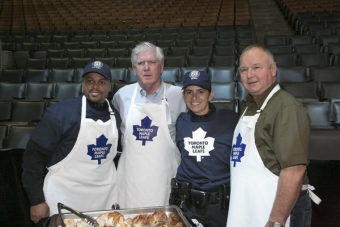 While the National Hockey League lockout continues, members of the Toronto Maple Leafs camp, including president and general manager Brian Burke and head coach Randy Carlyle, were at their stomping ground, the Air Canada Centre Dec. 18, to do something that likely raised their spirits — as well as hundreds of other people’s.

The Leafs’ executives and employees — in partnership with Second Harvest food bank and the Salvation Army — helped serve a mega holiday dinner in the arena bowl for close to 900 guests from over 30 local shelters and agencies, such as Covenant House, Kiwanis, Eva’s Phoenix, Red Door Shelter, Right To Play, Sketch, YMCA and Yonge Street Mission (see full list below).

“We are all very fortunate to live in the great city of Toronto. It’s important, especially at this time of the year, to assist those that need it the most,” said Burke in a statement released by Maple Leafs Sports & Entertainment.  “We hope that, in this small way, we were able to offer a helping hand by opening our Air Canada Centre doors and providing a special holiday dinner. The Maple Leafs would like to extend a very heartfelt thank you to Second Harvest and the Salvation Army, as well as the long list of generous corporate donors that helped make this event possible.”

All the leftovers from the dinner were collected by Second Harvest and donated to Good Shepherd Ministries. Every day Second Harvest rescues excess food, including from Air Canada Centre, and delivers it to more than 200 Toronto social service agencies with a wide variety of people in need, according to the press information.  In 2011 and 2012, the food bank delivered over 7.2 million pounds of donated food to agencies in Toronto.

Many of the Salvation Army shelters from across Toronto attended the Holiday Dinner. 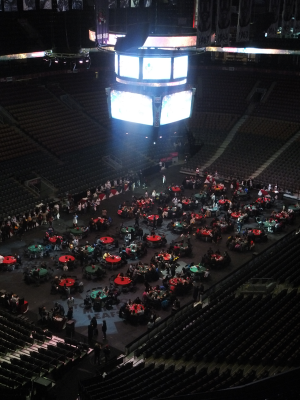 Leafs Hockey in the Neighbourhood

Salvation Army Locations from Across Toronto