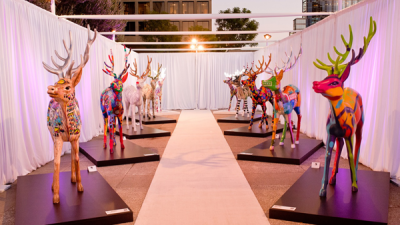 Forget a blow-up Santa or snowman on your lawn. How about a massive, colourful reindeer? The unique art installation of oversized acrylic reindeer in Los Angeles has raised more than $15,200 so far for local charity Inner-City Arts, which uses arts education to positively affect the lives of inner-city children.

The Reindeer Project features designs by 10 prominent local artists — Aaron Axelrod (who painted two) Couto Brothers, Yolanda González, Man One, Greg Miller, Max Neutra, Marilinda Rivera, Analia Saban, Johnny Taylor and Robert Vargas (who painted his live on-site at the unveiling of the installation) — plus one special reindeer painted by the students of Inner-City Arts as part of their curriculum.

The 12 reindeers are on display, grazing throughout the Westfield Century City mall and nearby Century Park, until January 1, 2013 at which point they will go to their new homes. There is even a downloadable map of the mall that shows where each artist’s creation can be found. All were put on sale with 100 percent of the proceeds benefitting Inner-City Arts. Three remain: the two by Axelrod and one by Rivera.

“We applaud Westfield Century City’s innovative approach to supporting Inner-City Arts,” the charity’s president/CEO Joseph Collins said in a press statement. “Not only were our students able to collaborate and explore their creativity through the process of turning a white reindeer into a beautiful work of art, the exhibition will promote local artists, celebrate our creative economy and, most importantly, support arts education for inner-city youth.”

“We are thrilled to host this exceptional display of creativity by a group of highly talented artists and believe it’s a festive way to celebrate the holiday season and support the ongoing work of Inner-City Arts,” said Karla Villatoro, marketing director, Westfield Century City, in a statement.

Three reindeer sold at a silent auction the night the creative caribou were unveiled in November and another five sold at an online auction at CharityBuzz with starting bids of $1500. An additional one just sold from their web site. Joann Socrates, special events, at Inner-City Arts, tells Samaritanmag that three of the reindeer went to one person in Florida and another two to someone in California. The three remaining can be purchased directly through Inner-City Arts (contact Socrates at 213.627.9621 x 115).

According to their web site, “Inner-City Arts’ beautiful, award-winning campus—a safe and tranquil environment designed to fuel the dreams of children, especially those living in poverty who may believe dreams are for other children—is a source of inspiration to all who visit. During the school day, after school and on weekends, elementary, middle and high school students come to Inner-City Arts to work with professional teaching artists in well-equipped studios, receiving hands-on instruction in a range of subject areas within the visual, performing and media arts.”