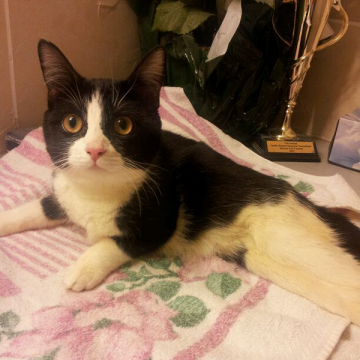 All animal suffering stories are heartbreaking but even in that dark realm, the story of little Angel the cat is especially poignant.

On Nov. 17, a woman spotted a cat carrier in the parking lot of a 24-hour McDonald’s location at Dundas and Bathurst in downtown Toronto where she had stopped on her way to work. Inside the carrier was Angel, suffering from a broken spine and broken ribs.

It’s unknown exactly how the cat acquired its injuries but abuse is suspected; X-rays revealed prior trauma consistent with a cat being kicked or beaten. In any event, Angel — named by the woman who found her — had clearly been abandoned.

“Someone had left her in a carrier with a blanket by the garbage can at the exit of McDonald’s,” Karen Beharrell tells Samaritanmag. Beharrell operates Oakville’s Special Ones Cat Rescue where Angel, reckoned to be about five months old, is currently being cared for and has been living for the past few weeks.

A call to the woman who discovered Angel was unreturned.

Beharrell continues: “The woman who found her contacted a rescue in Toronto that I’d rather not name. They told her to take her to a vet. So the woman took a few days off work to care for her – and she requires a lot of care, like needing to have her bladder relieved because she has no feeling and can’t do it on her own.

“Anyway, the woman who found her thought a rescue was going to take Angel on but they weren’t. They offered to pay to have her euthanized. By that point I had heard the story and I asked that Angel be brought to me.”

Today, Angel — who moves about using her front paws and dragging her paralyzed back legs behind her (see video below) — is awaiting treatment which Beharrell anticipates will cost thousands of dollars. But the grim reality of the little cat’s life is a stark reminder of just how cruel — and how kind — some people can be.

“Surgery could cost as much as $4,000 or $5,000,” Beharrell says, adding that donations are welcome and may be made via her website. “We’ve only had the initial X-rays so far. Right now I am trying to get an appointment with a neurologist to determine what Angel needs to have done. And that will cost about $250 for the consultation.

“But we know that Angel has some vertebrae that are crushed. She also has broken ribs. Plus it appears some of the ribs had been broken from a previous trauma and were mending. So this hasn’t just happened once.

“Right now I am massaging her legs and rotating them each day so they don’t lose the muscle tone. Maybe after surgery we can get her up in a cart. I’m not sure if she’ll be able to walk again, but she does have some movement which means her spinal cord isn’t severed so that’s a good thing.”

Alison Cross, senior manager, marketing & communications for the provincial office of the Ontario SPCA, confirms, “There is a case open on the cat.” However, the Ontario SPCA wasn’t called to the scene at McDonald’s where Angel was found which “limits the amount of information we have for this investigation.

“The cat was taken to a veterinarian and as grateful as we are that the cat was getting care, that cat is technically evidence so to speak. That evidence is gone because the cat is no longer in the state or location it was found in.

“So we are reaching out to the public for information we can use in this investigation and reminding them they should call us immediately and let us investigate when a case of animal cruelty is suspected or an animal is found in distress.”

“She’s such a sweetie and she’s so young,” says Beharrell of Angel. “She should be up and running around. She wants to but she’s very limited. I can’t let her play with the other cats in my care because they might accidentally hurt her, so I need to keep her separate.

“I see her watching the other cats and she wants to play but she doesn’t understand why I can’t let her do it. It breaks my heart.

“Somebody knows something,” Beharrell adds. “I don’t believe the abuser would have packed the cat in a carrier with a blanket, placing it where someone would find it. I think it’s someone else, who was trying to get that cat some help.”