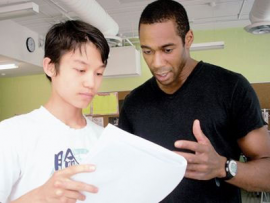 “When I work with kids I encourage them to think of Shakespeare as the Steven Spielberg of his time.”

There’s no hint of a sardonic wit behind Canadian actor Dion Johnstone’s comparison of the 16-century bard who wrote of the alienation of the ‘Other’ in Othello with the 20-century director who filmed the alienation of, well, an alien in E.T. Nor is the comparison lost on the media-steeped youth who participate in Shakespearience, a non-profit literacy program that empowers young people with the possibilities of the English language.

For many youth, Shakespeare — celebrated for centuries as a singular figure in the Western literary canon — is also derided as the, at best, most infuriating and, at worst, least interesting writer studied in high school English classes — an amusing and enduring irony.

But Shakespearience, which has a program for at-risk youth in Toronto underwritten by the Trillium Foundation, seeks to free Shakespeare from that context and help students connect the poet’s works to their lives today — lives largely influenced by film, television and the Internet.

“We all love movies and I love what Steven Spielberg and Peter Jackson have brought to the world with their films. We didn’t have CGI in the Elizabethan time, but we had the invention of these new words and Shakespeare was constantly inventing new words in his plays,” Johnstone tells Samaritanmag. “There’s so much imagery that’s contained in them, and so I tell the kids to think of the words as the CGI of the time. They were exciting the imaginations of the audience in the same way that feature films excite our imaginations today.”

Founded in 1996, Shakespearience conducts one hundred workshops a year to grade-level and high school students in the Greater Toronto Area. Run by executive director Marvin Karon, the program connects youth with professional actors in an interactive, simulated rehearsal process that explores themes from the Shakespearian canon. At the end of the workshops, students present their scenes for family and friends in professional theatres, such as the Studio Theatre in the Toronto Centre for the Arts, in downtown Toronto.

For the actors involved, like Johnstone, who sits on the board of Shakespearience Performing Arts, getting youth to access Shakespeare is about getting them to engage with the text – not simply as an exercise in deciphering the language – but by inhabiting the characters and their worlds using an actor’s tools. 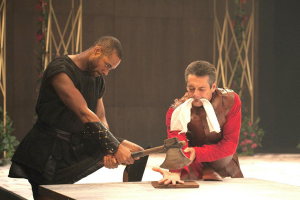 “We ask kids at the very beginning of the session: ‘Who here likes Shakespeare?’ And a few hands go up. Then we ask: ‘Who here finds Shakespeare difficult?’ And a whole bunch of hands go up,” says Johnstone, who’ll start his seventh season at the Stratford festival next year playing Othello. “We ask why, and they’ll say: ‘Well, it makes me feel stupid because I don’t understand the language.’

“But by the end of the process, they feel quite jazzed, that this is something worth looking at and it has the potential to increase their vocabulary and to increase their imagination,” he continues. “That’s the big thing we’re trying to do: empower them with the language and the possibilities of what that language can do for them.”

Shakespearience offers three programs: the In-School Experience for students grades 3 through 12, which is geared to work with 40 to 65 students for one, seventy-five minute period; the Summer Experience, which offers four-week, full-day summer workshops to students in grades 7 and up; and the After Hours Elsewhere Experience for 12 to 16 participants that offers a twice-weekly program over a period of ten weeks.

The After Hours Elsewhere Experience serves youth in what are deemed ‘priority neighborhoods’ — areas identified by Toronto City Council and United Way that are underserved and in need of solutions to reduce crime, improve key services and increase opportunities for youth.

After Hours Elsewhere started in 2006 in Scarborough’s Malvern District as a pilot to see if the program’s impact in that area could be transferred to other priority neighborhoods. After a successful initial run at Marc Garneau high school in Flemingdon Park this year, the program will continue to run workshops there for the next few years.

“All of these workshops are free. So the program is going to schools where kids wouldn’t have the finances to attend the Stratford festival, or they wouldn’t be exposed to this through any other way,” says Johnstone, who tells of a youth who had previously been caught up in selling drugs leave it behind to participate in the program. 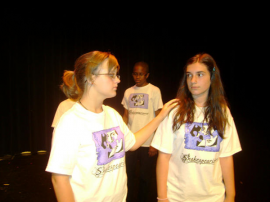 “I’ve also worked with a lot of kids where English is their second language. From the first read, they can’t make heads nor tails of it and they feel very disempowered from the start,” he continues. “It’s amazing that by the end, especially when their families come and see them perform, they’re not only speaking this language but speaking it clearly and emotionally invested in it. The transformation is incredible.”

Shakespearience is able to offer its workshops for free because of the support from the Trillium Foundation, The Toronto Star Fresh Air Fund, the Toronto Catholic District School Board and other donors. But a tighter economy threatens the support the program receives annually and Shakespearience runs the risk of not meeting operating costs.

“On one level, the program is really helping youth to develop an appreciation for and to break down the fear of approaching Shakespeare,” says Johnstone. “But on a more important level, it’s about empowering these kids. It’s important for them to know the potential they have to affect others in this world, because that’s something they never thought of or thought they could do, and with Shakespearience it is what they’re doing.”