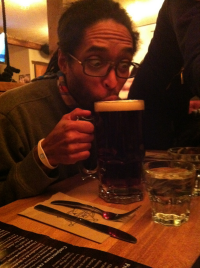 Rapper Prevail from multi-platinum Canadian group Swollen Members now has his own beer, aptly named Prev Ale. Created by North Vancouver microbrewery Red Truck Beer Company, the brand new seasonal ale will be sold on tap at select local bars for six weeks and a portion of the proceeds will go to help a local woman who requires surgery overseas for a rare form of cancer.

“Her name is Chelsea Steyn,” Prevail tells Samaritanmag.  “She had just given birth to her second set of twins and during that procedure  — getting medically checked out for the birth — they discovered and diagnosed her with brain cancer on her brain stem. The operation is quite expensive and there is only one place that can do it and do it quite effectively and that’s in Germany.

“So through a variety of charity events, she set out to raise $400,000 so she could get the operation done. Currently, I believe they’re at about $165,000 and there are other great companies that have taken this on to their shoulders as well, but this is where Red Truck and myself feel we’ll be able to contribute the most back to the community.”

Prevail doesn’t know Steyn personally, but she is from the Kitsilano neighbourhood where he lives. It was at his local watering hole, the Regal Beagle Bar & Grill, that her situation first came across his scanner. “They were trying to raise, I believe, $2500 for her as well,” he says.

The Regal Beagle will be one of the venues Prev Ale will be available, starting Dec. 8, in addition to downtown eateries Gotham Steakhouse & Cocktail Bar and Wildebeest. “The program runs for six weeks and each week we’ll pour at a different venue,” says Prevail, who expects to enjoy a small cast tasting of the specially made brew this week.  “The goal is to raise $2500, but we have $1000 of it put aside. So we’re actually trying to get $1500.

“The $1000 came from Red Truck saying, okay venue number one, we usually sell you kegs for x amount of dollars, but in this case we’re going to sell it to you for half, but instead of you giving us that x amount of dollars for the keg, we still want you to kick that other 50 percent into the charity. So essentially they’re paying full price for the keg, but they’re doing a feel-good by having Red Truck saying they’ll allot 50 percent from that first keg of Prev Ale to the charity event.

And neither is Prevail, even though the beer bears his name. He won't make a cent.  It’s purely a charitable venture that he hopes will continue every holiday season.

“As I said, it’s a six-week program and the main goal is to be able to raise $2500 for Chelsea’s foundation. A year from now, we will re-approach the project and look at whatever family in the community would need help at that time. My idea is that if it runs well this year and everybody on the Red Truck side is happy with the amount of money raised, then we will look at attaching that program to different charity every holiday season.”