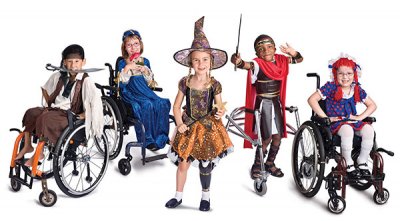 Halloween has always been an elaborate exercise in give and take. This October 31, Toronto’s Holland Bloorview Kids Rehabilitation Hospital Foundation, Canada's largest children's rehabilitation hospital, intends to level the playing field for those on both sides of the front door with a new fundraising campaign.

Holland Bloorview serves about 7,000 children each year, with about 600 inpatient admissions and 58,000 outpatient visits.

The Foundation’s Change for Kids program builds on the tradition of trick-or-treaters collecting change for charity door-to-door but offers a 21st century spin. It works like this: Those doling out the treats grab a paper card containing 20 pop-out “coins” at a cost of $5.

They then hand out the individual paper coins to trick-or-treaters. Once back home, said trick-or-treaters go online and enter the paper coin’s PIN code for their chance to win some 500 prizes such as movie tickets, gift cards, RESPs and a grand prize trip to Great Wolf Lodge.

Each time a child enters a PIN code, Scotiabank makes a $5 donation to Holland Bloorview Kids Rehabilitation Hospital, up to a maximum of $20,000. The paper coin cards remain for sale at GTA Scotiabank branches and Costco and Toys ‘R’ Us stores until Halloween. Cards distributed through local periodicals, meanwhile, can be activated online at changeforkids.ca.

What’s more, by entering the PIN codes, trick-or-treaters are proactively helping to fundraise while those distributing the coins get to do something more meaningful than dropping fistfuls of candy into eagerly offered sacks. Sounds like a winner all round.