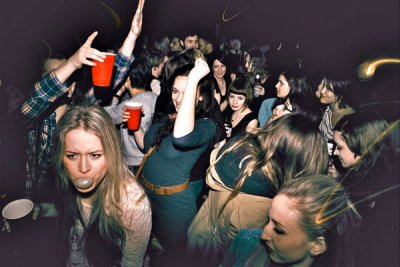 Dubbed The Dudebox Is Fucking Dead, the annual Halloween party is $5 to get in before 12 a.m., $10 after, at 25 Cecil Street, a big hall inside the United Steelworkers of America Union building.

“The goal is to raise $10,000 total,” co-founder Daniel Tal tells Samaritanmag. “The most we’ve ever raised in one event was five. We basically said we’d try to double what we’ve ever done.”

According to its mission statement, Manifesto Community Projects, aimed at 14-to-29-year-olds, is "a youth-led, non-profit organization working to unite, energize, cultivate and celebrate Toronto’s vibrant, diverse youth arts community.  We provide a platform and resources to advance the growth of the arts as a tool for positive change across the GTA, Canada and abroad."

“They contacted us and asked us to fundraise,” says Tal. “So we said we’re going to throw three parties, each one more ambitious than the last.

“The first one was a basic party we threw at a Mexican bar called La Perla. It’s all hip hop-based and we just had people show up, drink tequila, party and we raised $705.

“The second one was at a gym called the Academy of Lions on Ossington. We transformed that space into a bar for the night, again all hip hop. That one was free to come in and we profited off the liquor, sponsored by Steam Whistle and Tag Vodka. We raised $3400.

“This third party with the same sponsors is our Halloween party . We do that every year.”

“Basically, we all lived in a big shitty loft in Chinatown throughout university. It was massive, had an insanely big — and dangerous — rooftop patio with a view of the skyline, and most importantly, was run by an absentee landlord. So we constantly through parties that would reach 300 to 400 people. They were legendary,” Tal explains.

“Eventually, the place became too run down and we had to leave, so we threw the final house party on Halloween and called it ‘Dudebox is Fucking Dead,’ which was a play on the fact that we were moving out. It was Halloween and finally because we're big fans of Refused — their most notable album was titled Refused is Fucking Dead.

“Once we had all moved out there was still a large demand for parties and we had a huge base, so we decided to move into party promotion at bars. But because we are a group of six guys and we hate putting money into our friendship, we settled on giving it away.

“The goal for the first party was to buy one cow for a family through Heifer International, but the party was so successful that loads of people couldn't get in, and we raised enough to buy two cows. That's when we realized we were actually good at what we did, and pursued it further.

“Eventually, we realized that these bars were making thousands of dollars off of our crowd, while we were only raising a bit for charity. So we took the logical step of running the bar ourselves. We got licenses, liquor sponsors, design teams and all that bullshit. And now we've raised close to $60,000.”