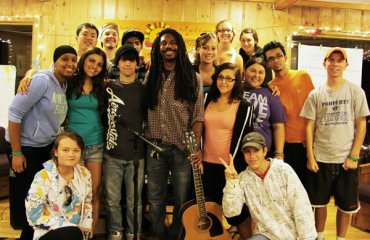 Former Staggered Crossing singer Julian Taylor recruited painter and YouTube mystery man The Drawing Hands to film the creation of a watercolour for the video to his song “Never Gonna Give You Up.” The resulting painting is now up for auction to benefit Camp Oochigeas for kids, ages 4-19, with cancer.

The year-round Ooch Downtown is an 18,000 square foot office and program space in Toronto complete with a sports court, teaching kitchen, parent lounge and indoor rock wall. In the summertime, kids can get away to Ooch Muskoka, a 400-acre property on a private lake with outdoor programs.

“I’ve been volunteering for Camp Ooch for the past four years. I do songwriting workshops for the kids,” Taylor tells Samaritanmag. “While the video was getting a lot of attention, it dawned on me that there was something we could possibly do to raise money for Camp Ooch.”

The Drawing Hands — who does not go by his real name — has a successful YouTube page with more than 10,000 subscribers and videos with more than 2.6 million collective views.  All one sees are his hands doing the work: everything from narrated tutorials on how to draw a realistic eye to portraits of well-known figures such as Lady Gaga.

“We’ve never met,” says Toronto-based Taylor, adding that The Drawing Hands lives in the Ukraine. “We’ve only talked on Facebook, YouTube and by email. He did a drawing of a Staggered Crossing portrait years ago and he got in contact with me because he did a portrait of Bruno Mars to one of our old Staggered Crossing tunes [2005’s ‘My Disease’] and asked if he could use it.”

Taylor, who was once signed to Warner Music Canada with Staggered Crossing and is now signed to indie label Aporia, released “Never Gonna Give You Up” as the first single under the name Julian Taylor Band.

“I didn’t budget for a video and I just asked him if he wanted to do something and he did that,” says Taylor of the painting of a young lady with flowing hair standing in front of his likeness.

Taylor didn’t set out to auction off the painting when the video was released and when the idea struck him wasn’t sure if The Drawing Hands would agree to part with it — but after hearing about Camp Oochigeas he did.

“We’re trying to raise a couple of grand if we can. We’re not shooting for a couple of hundred thousand dollars here,” Taylor says. “There was a Sporting Life 10K run for Ooch which raised a million dollars. We’re just trying to get our friends and family and fans to raise up to $2500 if we can. It would be amazing if we could do that because $2500 will send one child to camp for the entire summer.

“The money goes to the camp and they decide what to do with it.”