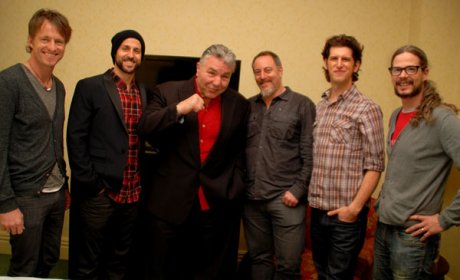 Canadian rock band Our Lady Peace will be donating a lump sum to boxing legend and public speaker George Chuvalo’s charity, which allows him to speak to young people about the dangers of drug use, by focusing on making smart choices and living a healthy lifestyle.

“That’s my target area, young people, usually around high school age,” Toronto-based Chuvalo tells Samaritanmag. “This is when you make the most important decisions of your life — regarding sexuality, lifestyle choices, about education and so on.

Chuvalo, now 75 years old, is the Canadian heavyweight who went the distance with Muhammad Ali (1972 and 1966) Joe Frazer (1967) and George Foreman (1970). A photo from those days is featured on the cover of Our Lady Peace’s latest album, Curve. He can also be heard throughout the final song, the acoustic “Mettle,” talking what it takes to be successful, in the ring and in life — likely words he has spoken countless times at his speaking engagements.

The multi-platinum-selling band — frontman Raine Maida, drummer Jeremy Taggart, bassist Duncan Coutts and guitarist Steve Mazur — has agreed to donate 25-cents per “Heavyweight” single sold in Canada.  The final amount will be tabulated, this year, at the end of the campaign, says Our Lady Peace manager Eric Lawrence.

The song has sold 9300 downloads to date, according to Nielsen Soundscan Canada.

“George’s life story is very profound,” Maida tells Samaritanmag. “He’s had a couple of his children die from addiction and one from suicide, and his first wife [from suicide]. So he started a foundation a while back, just trying to help kids with addiction. He does a lot of public speaking, at high schools, and really targets the youth. His cause is just true to his life so we’re more than happy to be part of that.

“It’s so worthwhile and obviously something that’s ongoing. He’s stood up and keeps fighting the battle.”

Chuvalo’s son Jesse took his own life in 1985 and another son, Georgie Lee, overdosed in 1993. Then, his wife, Lynn, committed suicide after their second devastating loss, and three years later a third son, Steven Louis, OD'ed. His two living children — son, Mitch, and daughter, Vanessa — married and gave him grandchildren. George married his second wife, Joanne, and became a stepfather.

Crucial to his talks are love of family and expressing this love.

“For some people, it sounds kind of hokey, talking about loving your parents every day, showing that, hugging them every day, telling them you love them and you will hear back, ‘I love you too,’” says Chuvalo.

Chuvalo has been giving such talks since 1996, but has only had his registered charity for the past five years. Presently, it is called George Chuvalo Research Group Inc. because he purchased an existing organization and added his name to it, but it will be changed. “I’m going to give it a little sexier name,” he laughs.

“It’s not so much a research group — there is some research done in it, but it’s more about affecting change and a person’s outlook. When I talk about what happened to my family, it’s a chance for me to change things for kids because it’s a very wrenching story. I usually have the kids’ attention for the whole presentation and it usually lasts for about an hour and a half.

In the past, George Chuvalo Research Group Inc. has received financial aid from such sources as The Pepsi Foundation and the Kiwanis Club of Toronto Foundation. The money he shall receive from Our Lady Peace will help “send me around the country,” Chuvalo says, going towards flight, hotel and driving expenses.

“Never in the history of mankind has it been so dangerous to be young in a lot of ways,” he says. “A young person has to be very careful about making right choices in life and the more you establish yourself earlier in your life, the better off you are, loving your parents, showing your love each and every day.”